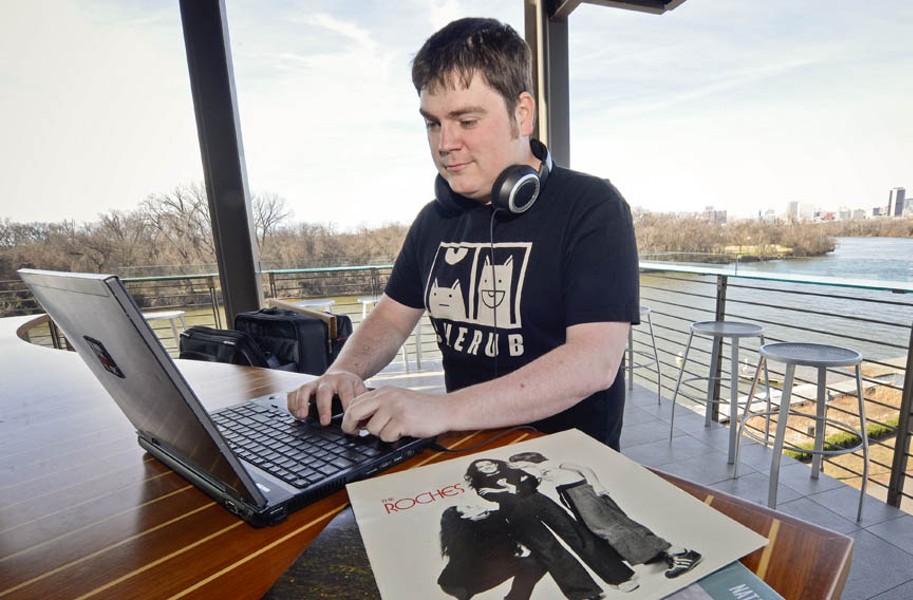 Ash Daniel Doug Nunnally, who edits the print version of RVA Magazine, is posting four new women-centric podcast shows on Jan. 19 just before the presidential inauguration. He says he hopes to help “balance the scales.”

Of all the ways to process the presidential election, Doug Nunnally’s was musical.

Since August 2014, he’s had a weekly podcast recorded in his garage, “Sound Gaze,” to air his musical opinions. Two episodes created in reaction to Nov. 8, “I’m With Them,” were intended as a celebration of women in music, presented with the goal of providing positivity in the face of overwhelmingly negative feelings.

“The thing that stuck out for me after the election was how much of a gut punch it was to women and feminists,” Nunnally says. “There were people gleefully taking joy in not respecting women during the campaign. You couldn’t ignore sexism after this election.”

His initial plan was to create a list of favorite female artists for a special one-off podcast to run that weekend. The list quickly totaled 200 before being culled to 100, still a hefty three-hour show. Then bands began contacting him about what they could do to deal with the upsetting new world order and a second idea took hold. He suggested that his favorite female-fronted bands pick their own favorite female songs and another three-hour show was born.

“It made working down my original list easier because I no longer felt guilty about leaving out a band like Bikini Kill — who were a huge inspiration — because the Talkies chose them as their favorite,” he says of the mix, which includes such notable artists as Nina Simone, St. Vincent and Loretta Lynn along with local favorites like Doll Baby, Sam Reed and Anousheh.

“A lot of these songs are my favorites of all time,” he says. “Grimes is brilliant and Missy Elliott, come on. Arcade Fire’s ‘Sprawl II’ is probably the best song of the decade. The Roches’ ‘Hammond Song’ — if they came along today, they’d be huge.”

Nunnally is working to upgrade his garage setup so he can play host to live bands twice a month the way he did at University of Richmond’s radio station, 90.1-FM WDCE, with the Tide Rose, Jeremy White of the Blue Hearts and Virginia Beach’s Feral Conservatives.

He also maintains a full-time job editing the print version of RVA Magazine. And that wasn’t enough to occupy every waking hour, so Nunnally creates a weekly newsletter called Off Your Radar. Approaching 50 issues, it focuses on one significant album that’s analyzed by regular contributors as well as guests such as Nandi Rose Plunkett of Half Waif and John Schaefer of “Soundcheck” and “New Sounds” at radio station WNYC.

Albums have included Bat for Lashes’ “Two Suns” and Amanda Shires’ recent “Down Fell the Doves.” When you add in his weekly Tuesday music trivia night at Rare Olde Times — a locals’ favorite for his clever questions and offbeat musical choices — it’s clear why Nunnally is up until 3 a.m. four nights a week.

Next weekend’s inauguration and the Women’s March on Washington were enough to motivate him to continue the podcast theme. “I think the march is a great way to show the size of the opposition,” he says. “Conservatives will turn their noses up at it, but American democracy is founded on protest. The people who carried out the Boston Tea Party are taught as heroes to our youth, not as whiny losers who destroyed millions of dollars of public property.”

To be posted Thursday, Jan. 19, right before the Friday inauguration, the four new women-centric shows will be presented apolitically so as to not blur the message that female musicians are equals in the world of music. Nunnally is convinced the message needs to be repeated in the face of a political platform that continues to try and prove the opposite.

“The Roches are contributing, which is a huge deal for me since they were on my mix for the first batch and one of my all-time favorite artists,” he says. “The band Joseph, Missy Mazzoli, Hazel English, and Gore Gore Girls are some other bigger names that are definitely doing it.” Richmond artists Atta Girl, Positive No, Vexine and Hannah Goad also are contributing.

Nunnally recalls one of his WDCE listeners once wrote a comment that read: “I know you play a lot of tit-rock on the show, but maybe you’ll want to feature some cool guy musicians too in the future. I think my stuff would be a great fit. Tons of swagger that I don’t think anyone could ignore.”

He refused to bite, he says: “What this guy is missing is that it’s not about cool women making cool music, it’s that these musicians are making the most vital music of our time, regardless of their sex. I’m just trying to balance the scales.” S