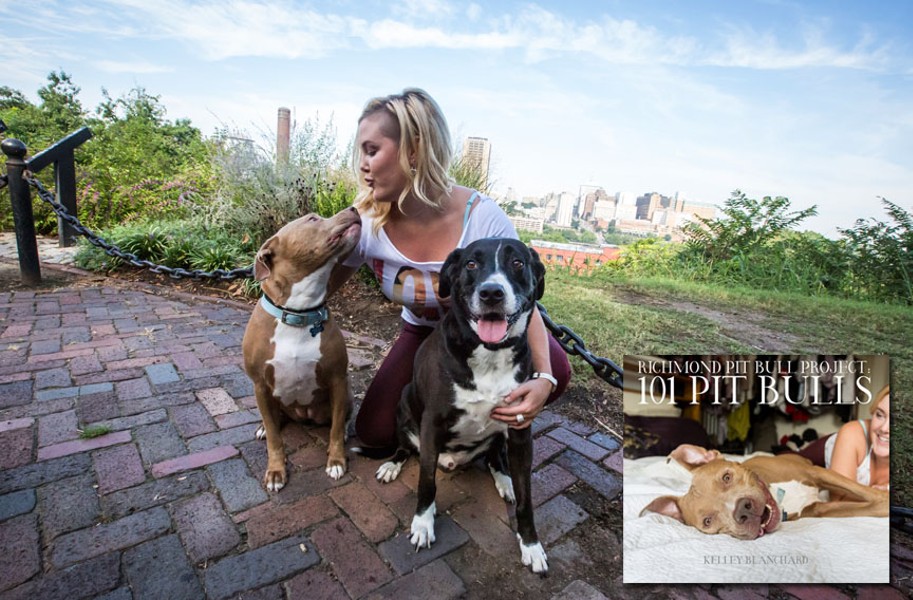 The self-published coffee-table book, which sells for $40, will have a launch party at sponsor the Veil Brewing Co., and 20 percent of proceeds will go to a local rescue organization, Ring Dog Rescue, with which Blanchard also volunteers.

That’s why she had to miss our in-person interview and race to Virginia Beach — to rescue this abandoned pit bull and bring him to Ring Dog co-founder Opie Taylor. But considering the dog is ready for romance right now, she says, Blanchard might ask Taylor to rename him. “I’m thinking Fabio,” she says, before we lose reception and the phone goes dead.

A minute later we resume our conversation and Blanchard, who was the co-founder and creative director for New Normal Apparel Co., explains how she got involved with pit bull issues and came to own her beloved dogs Maddox and Blueberry.

After rescuing a pit bull years ago, she fell in love with their sweetness, intelligence and loyalty. But the big reason she wants to call attention to their plight is because local shelters are overflowing with such dogs, mainly because of the negativity surrounding their dangerous reputation.

In Virginia, you can’t deny ownership of a dog based on breed. But hurdles remain with insurance and renters’ issues across the country, says Taylor of Ring Dog Rescue.

“The fact is, the American Temperament Test Society rates them as 82 percent having fantastic temperament,” Taylor says. “All that said, I don’t think they’re for everybody. People need to stop choosing a dog for their home based on what it looks like — or anything other than the dog’s behavior. If we can look at dogs as individuals, we can look at behavior as characteristic of each instead of blanketing.”

There’s no way to scientifically determine how many pit-bull-type dogs are in Richmond shelters, Taylor notes, because no DNA testing is being done to determine the breeds. But because of the large number of shelters, Taylor often sees a reoccurring problem in Richmond: It’s too easy to simply hand the dogs off.

“While we have so many fantastic rescue ops, we still have so many entering shelters each year,” she says. “There is a rooted issue somewhere in that. If you’re not prepared to take care of an animal, then think beforehand.”

Regarding the vocal anti-pit-bull crowd that finds the dogs inherently dangerous, Taylor has found most people who speak out have suffered from personal tragedies. It’s more of an issue of responsibility both with owners and parents who might allow their children around the dogs, she says: “When I research the incidents, I always find [some element that people] are also not willing to take responsibility for.”

Blanchard hopes her pit bull books — another is planned for the fall — will make a difference and help support Ring Dog Rescue. She notes that 80 percent of the dogs pictured in her new book have a background of violence, whether they were bait dogs or abused. Some had their ears chopped off, another was covered in acid burns.

“The dogs are not the enemy, the people who [fight them] are,” Blanchard says. “Don’t buy dogs from breeders when shelters are overflowing — and don’t breed your dogs when there’s an overpopulation problem.”

Included in the book are profiles of local rescue groups Richmond SPCA, Richmond Animal Care and Control, Gracie’s Guardians and Ring Dog Rescue; and principal photography was done by her friend Kourtney Smithson.

“No shelter will allow you to adopt without a full understanding of temperament,” Blanchard says. “You’re protected.”

Taylor sees this book as a step in the right direction of educating the public to the nature of these kinds of dogs and their loving relationships with owners.

“You look at a book like this, and you see all the different kinds of people involved — professionals, business owners, attorneys,” Taylor notes. “Is it fair to take away or punish responsible persons for the actions of a few?” S

The book-release party will be held at the Veil Brewing Co. on Sunday, Nov. 20, from 1-4 p.m. It features catering from O’Toole’s and Northern Neck Oysters and Seafood Co. To pre-order the book, visit richmondpitbullproject.org.