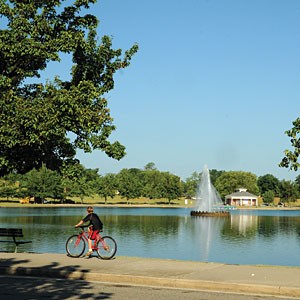 Now that the city parks director, J.R. Pope, has resigned, what will happen to his long-term plans for the park system?

A parks master plan Pope commissioned, which was drafted two years ago and then set aside, says Richmond needs to buy 554 acres of park space and develop 45 miles of new trails in the next 10 years.

There should be a park within six blocks of every city resident, the plan says. It identifies a need for 38 playgrounds, four skateboard parks, three new recreational centers, two outdoor pools and one indoor pool. These projects, along with other new and upgraded facilities, would cost around $171.7 million, the plan says. (This figure is general and based on average national costs.)

To help pay for these improvements, the plan, completed in May 2008, recommends the parks department search for income sources beyond tax dollars, such as corporate sponsorships, advertising, concessions and usage fees.

ƒ?› 14 percent of city residents had participated in recreation programs in the last 12 months, which is less than half the national average participation rate.

Pope resigned in November after a report by the city auditor's office found the city had wasted $36,673 on building a simple reception counter for the Pine Camp Community Center, in part because two employees collected 135 hours in overtime for the project.

The parks master plan was one of the first projects Pope launched when he became director in 2006. To solicit ideas, 15 public focus groups and 20 meetings with city staff and community leaders were held.  The company hired to create the master plan, Pros Consulting, delivered its weighty first draft in May 2008. And that was it, apparently. The plan was never presented to City Council, and thus never officially approved.

Pope did begin to implement some of the recommendations mentioned in the plan, such as more consistent park signs and the opening of a concession stand at Byrd Park. Pope also oversaw the restoration of ponds in Bryan Park and the lake in Forest Hill Park. “He turned our parks system around,” says City Council President Kathy Graziano.

Supporters of city parks are wondering if the momentum will continue. “We don't have a vision now,” says Maureen Egan, president of the Friends of James River Park. “What I hope we don't lose now with his departure is the citizens expecting more from their parks.”