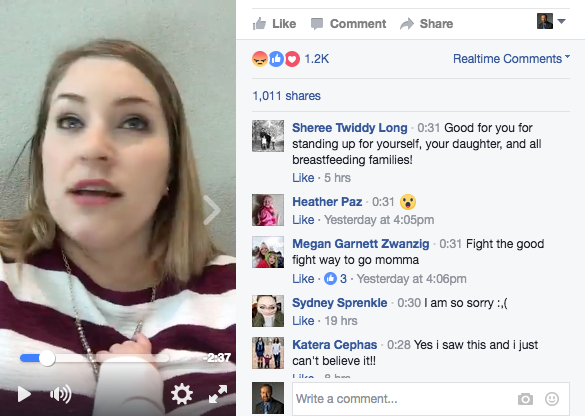 A trip to see the Easter Bunny turned hairy over the weekend for one Richmond mother, who says a female security guard at the Short Pump Town Center tried to stop her from breastfeeding her 8-month-old.

A live Facebook video shot in the midst of an encounter inflamed a corner of the Internet, racking up more than 1,200 views and a thousand shares by Tuesday afternoon. It’s also given steam to a Nurse-In set for May 20 at the mall, intended to “to support normalizing public breastfeeding.” The event was scheduled in February.

The mother, Ashley Cooper, says she and her husband went to the open-air mall to get photographs of their two daughters with the Easter Bunny.

Cooper left her husband in line with their 3-year-old and went to find a place to nurse the baby, she says. But the nursing room was in use at the crowded mall.

Less than 10 seconds after beginning to breastfeed on a bench against the wall, she says, a security guard “rushed over” to tell her she couldn’t nurse there. When she said Virginia law protected her right to breastfeed, the security guard called for backup.

“She got on radio and said somebody’s not complying,” recalls Cooper, 29. More security arrived and stood around her while she finished breastfeeding.

“I’ve nursed in public I can’t tell you how many times,” she says. “This is the first time anybody’s even given me a second glance.”

Cooper says the mall’s guest services was apologetic and gave the family free train ride tickets. They told her that the guard shouldn’t have asked Cooper to move.

The live video drawing attention on Facebook shows Cooper breastfeeding on a bench, explaining what just happened. A female passerby asks what happened and expresses shock that Cooper was asked to stop.

“I thought maybe five or 10 of my mom’s friends would see the video,” Cooper says. “I had no idea it would be viewed by so many people.”

She says others have contacted her to share similar issues they said they experienced at Short Pump Town Center.

Cooper says Short Pump Town Center contacted her again through Facebook to apologize and said they would make sure their staff gets a refresher on nursing rights. Cooper says they confirmed it was against their policy to remove breastfeeding women.

“The security officer was just trying to do her job but the problem is she thought her job was to stop a mom from nursing,” Cooper says. “There’s a gap between training and real life.”

The management office of the mall didn’t return a call for comment or a confirmation of its policy.

Cooper is satisfied with the mall’s response, she says, but wants nursing mothers to be aware of their rights and for area businesses to train their employees on the law.

In 2015, Virginia became one of the last states to pass legislation protecting a woman’s right to breastfeed anywhere that she’s lawfully present. Before, the protection only applied to public spaces and private property owners could set rules against it.

Cooper says this won’t keep her away from Short Pump Town Center. The Midlothian mom says the family prefers the Easter Bunny there. Another local mall “has a creepy looking bunny,” she says, laughing.