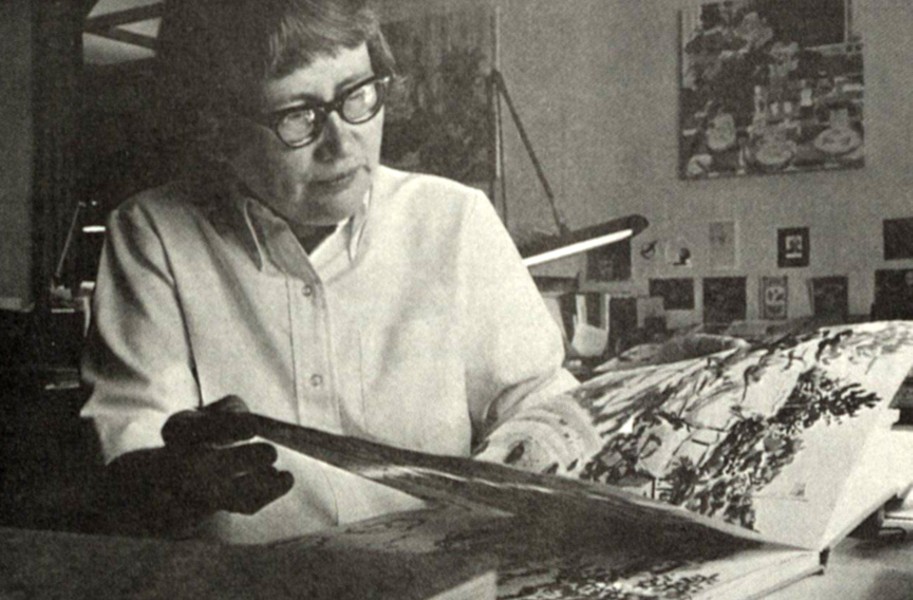 The unfortunate demise of the Village Voice newspaper is a reminder that the original art director of that paper in 1955 was a Richmond native, Nell Blaine, who today is considered one of the most important American landscape painters of the 20th century.

Born in 1922, Blaine was the daughter of Harry and Nora Blaine and grew up on Barton Avenue. In addition to her art skills, while attending John Marshall High School she also was a writer. The May 27, 1938, edition of its student newspaper, The Monocle, reported Blaine won first place in a contest for a story called "The Cottontail's Plight." Teacher Eunice Clark told the Monocle "Nell has a gift for writing."

In 1939 Blaine was awarded a scholarship to the School of Art at Richmond Professional Institute, now Virginia Commonwealth University. Her instructor, Theresa Pollak, recalled in 1972 that Blaine was "frisky, but very determined and a hard worker." Pollak also helped Blaine break down the constricted, mechanical way of painting acquired from her illustrating work. Blaine's mother called Pollak and complained art school was "ruining her daughter."

"[Pollak] could see I was serious, but she didn't like what I was doing," Blaine told author Martica Sawin in 1996. "It was advertising art like Cassandre posters with big flat areas of color."

Blaine was literary editor of the Proscript, the student newspaper. But after two years, with funds running out, she had to go to work for an advertising agency while taking classes at night under the artist Worden Day, a relationship that profoundly influenced her.

"It was Worden who got me interested in landscape painting, and I would get on my bike at 6 a.m. and go to high perches above the James River to do watercolors before going to work," she recalled. It was also Worden who encouraged her in 1942 to go study at the Hans Hofmann school in New York's Greenwich Village.

Despite her mother's objections, the decision changed Blaine's life. By the 1940s American artists were stressing painting not so much as beauty but as being true to the artist's inner experience, and her Hofmann scholarship encouraged her to spontaneously get those inner sensations onto canvas. "I must work fast to get it all down before it's gone," she said in a 1968 interview. "After that it becomes work."

At 22 Nell became the youngest member of American Abstract Artists, calling herself an "abstract impressionist." She co-founded the Jane Gallery and earned numerous one-person shows as her work evolved into a self-described synthesis of the styles of Hans Arp and Piet Mondrian. She also lived a genuine 1940s bohemian lifestyle, listening to jazz, eating 40-cent dinners and shivering in a $25-per-month apartment. By 1953, with her marriage to Bob Bass long dissolved, she started a working relationship with the Tibor de Nagy Gallery that lasted her entire life.

In 1954, two Word War II veterans, Edwin Fancher and Dan Wolf, worked with John Wilcock and novelist Norman Mailer to start the Village Voice. A fellow Hofmann student who dated Mailer asked Blaine if she would be interested in doing the typography and art direction since she had publication experience. Nell came on board and designed a white-on-black logo and all the section heads while her painting career soared. After less than a year she left the financially-plagued startup and pursued art full time.

Her career nearly ended in Greece in 1959 when she was stricken with bulbospinal polio. Warned she may not live another 24 hours, she was rushed to New York in an iron lung and spent eight months hospitalized there, alive but fearing she would never paint again.

Confined to a wheelchair the rest of her life, she gained use of her hands with intense physical therapy, though she had to paint in oils with her left hand and watercolors with her weaker right.

Nell died of respiratory complications in 1996. While her brief work on the Village Voice goes unrecognized, her painting legacy survives not just with a 1986 Lifetime Achievement Award from the Women's Caucus for Art, but in the permanent collections of numerous museums, including the Metropolitan Museum of Art, the Whitney, the Hirshhorn and of course, the Virginia Museum of Fine Arts. S