Many downtown businesses were damaged, Confederate monuments were covered in graffiti and a Confederate memorial hall burned during a weekend of outrage.

Protesters in Richmond set fire to the United Daughters of the Confederacy headquarters and covered Confederate memorials with graffiti during a second night of outrage and violence Saturday that saw one person shot, businesses around the city looted and storefronts torched. 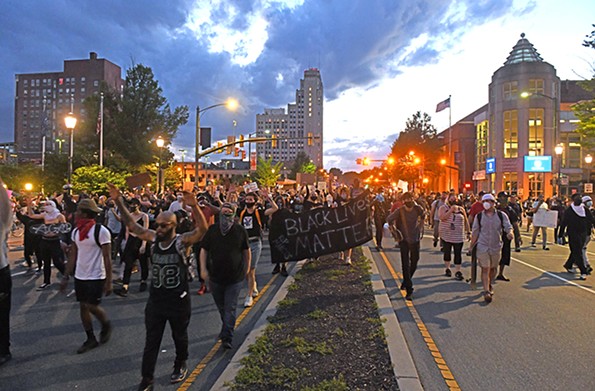 Mayor Levar Stoney condemned the destruction, which has played out in cities across the country following the death of George Floyd in Minnesota. Stoney announced Sunday morning that Gov. Ralph Northam had granted his request for a curfew and said the National Guard was on standby to help enforce it.

Police said one person in a vehicle was shot by a protester and the victim is in life-threatening condition. In a separate incident, police said protesters set fire to a home occupied by a child and blocked the Fire Department from responding. 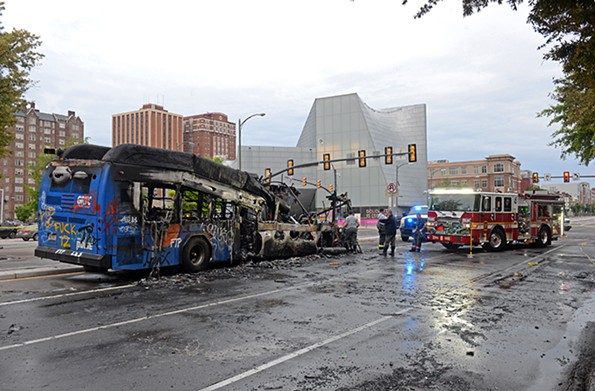 “We can not sit here idly and tell everyone here that these actions are productive – because they’re not,” Stoney said. “When you block law enforcement from allowing fire services to get to a home, an occupied home that has caught fire, you are not inspiring change.”

The protests Saturday began peacefully but quickly grew violent when a crowd of at least 500 people marched to Capitol Square, where they ripped down a makeshift barricade and hurled bottles and traffic cones at a line of officers blocking the entrance with riot shields. 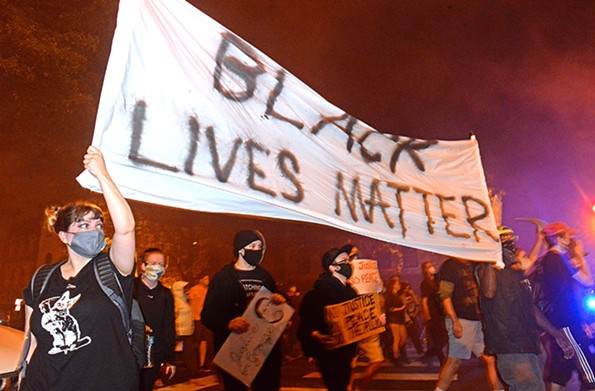 The crowd left the area as a mass of state police officers approached, heading west to the city’s police headquarters, where the night before protesters had set a police cruiser on fire and broken out windows. 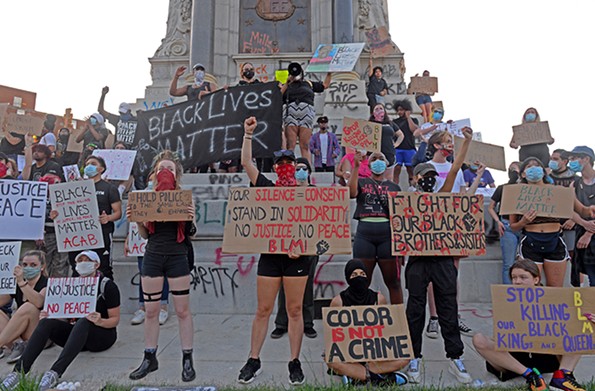 By midnight, protesters had dispersed throughout the city, lighting fires in trash bins, breaking windows and looting stores, including a state liquor store, a video game shop and a CVS drug store. At least two businesses burned, including a shoe store and a Rite Aid pharmacy that workers had been attempting to board up as the protest began.

The sharpest clashes broke out east of Broad and Belvidere in Richmond’s arts district between 1:30 and 2:30 a.m., where protesters lit numerous fires, including a large barricade of trash cans and dumpsters. Police in riot gear once again faced off with protesters, firing tear gas while protesters lit fireworks.

On Monument Avenue, home to the city’s largest Confederate memorials, protesters blanketed the massive statues with graffiti. At a memorial for Jefferson Davis, the president of the Confederacy, a noose was left hanging around the bronze figure’s neck.

Down the street, a fire burned inside the headquarters of the United Daughters of the Confederacy, a group that helped erect Confederate memorials around the South and promoted the Lost Cause interpretation of the Civil War that “emphasized states’ rights and secession over slavery as causes of the war and was often used to further the goals of white supremacists in the twentieth century,” according to Encyclopedia Virginia. 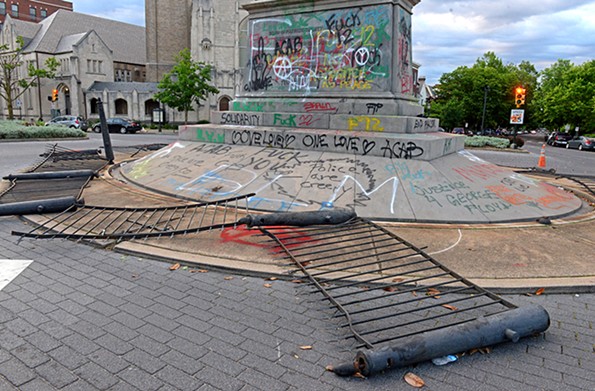 Bystanders reported that incendiary devices of some kind were thrown through the front windows, and flames were visible to onlookers from the street and along the north side of the building.

One bystander who lives in the neighborhood, a self-described Yankee named James, told Style Weekly that a large crowd of protesters attacked the headquarters, picking up barriers, spray-painting the building and throwing “some kind of incendiary device” into a window. When the fire broke out, he climbed into a window and began pouring his own beer from his backpack onto one of the small fires to help put it out, he said, while another fire had grown too large to control with beer. 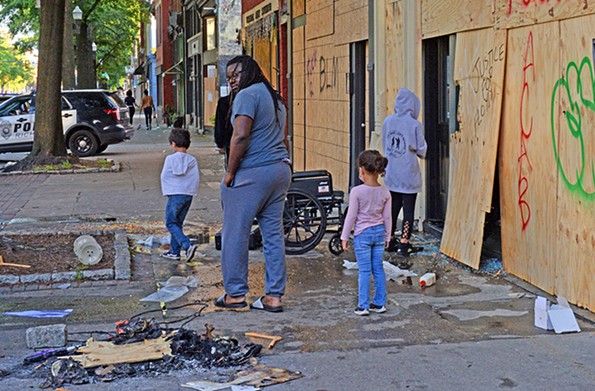 “As I walked away, the riot cops showed up and were shooting rubber bullets or something, driving protesters [away]. I got hit with something in the leg,” he said, noting that he fought earlier with a protester over an American flag being destroyed. 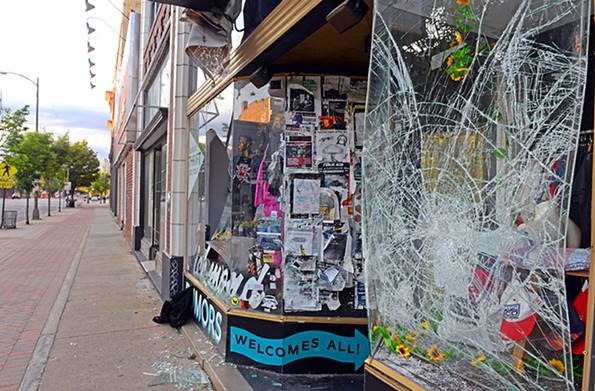 On Sunday morning, the members of the organization cleaned up but declined to comment on the extent of the damage, saying they were told not to discuss it because it was an active arson investigation.

Stoney said peaceful protests would be allowed to continue, but under the curfew announced, anyone outside between 8 p.m. and 6 a.m. who was not traveling to work or seeking emergency services would be stopped by police. 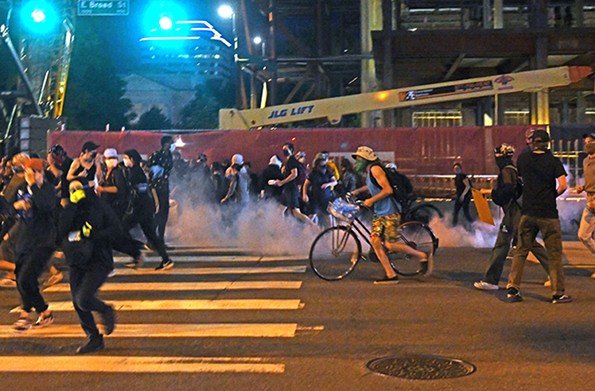 “At this point, bad actors are hijacking the cause,” he said. “They’re taking advantage of our pain, making a mockery of George Floyd’s death and using our frustration, our anger and our heartbreak to create chaos.”

In a statement issued Sunday morning, Northam confirmed he had granted Stoney’s request for a curfew in Richmond. 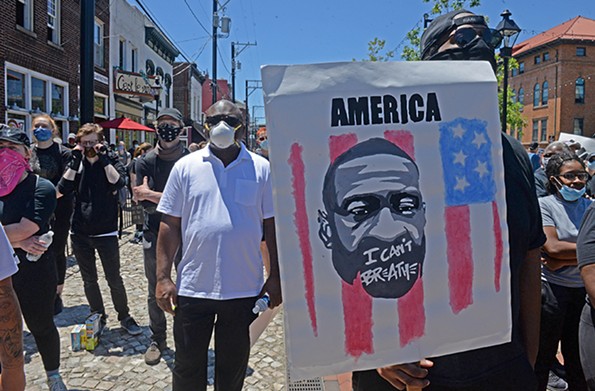 “I acknowledge each of the voices crying out for justice and healing across the United States and in our Commonwealth. I affirm the deep concerns from the black community,” he wrote. “I hear you. I know your pain is real. We have all seen too many people harassed, abused and killed by law enforcement officers, in too many places, for too long – just for being black. I also know that others are exploiting this pain and are now causing violence.” 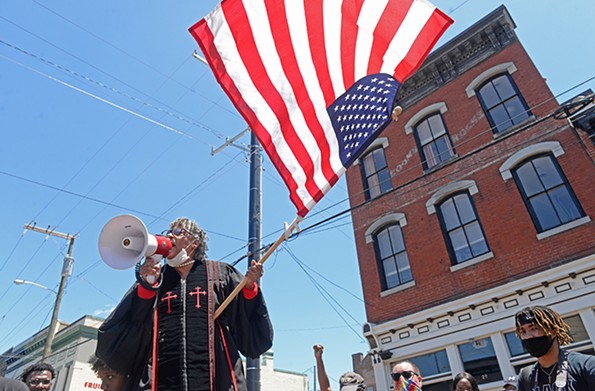 Update on Monday: Protests continued on Sunday, May 31, after the citywide curfew was imposed with 233 people arrested and more than 20 guns confiscated, according to the Richmond Times-Dispatch. The paper also reported that more than a dozen Carytown merchants had boarded up their windows after three businesses were broken into over the weekend. Another protest was scheduled for Monday evening at Monroe Park, marching west toward Carytown.