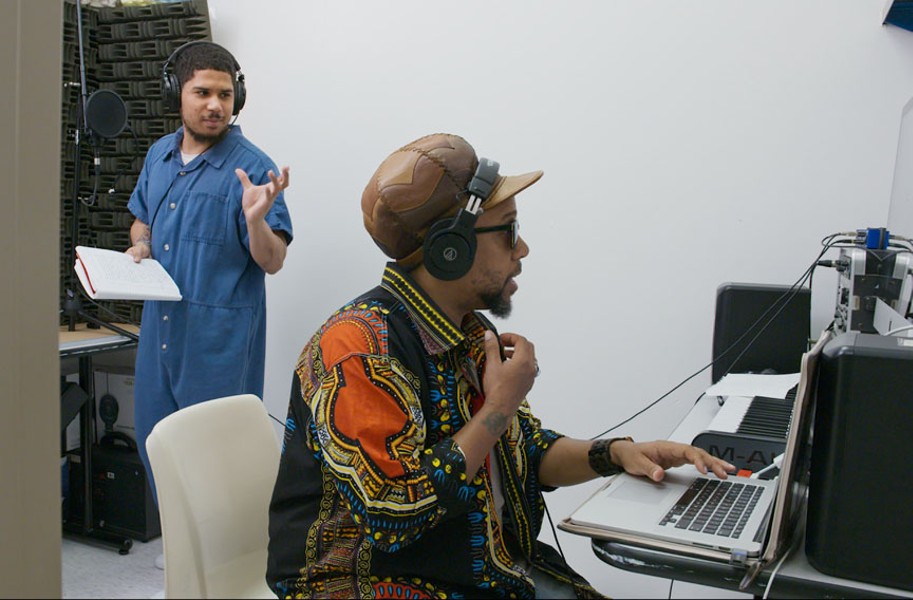 It's a sad and shocking comment on our society: The U.S. locks away more of its population per capita than all other nations in the world.

Now a new feature-length music documentary filmed inside the Richmond City Justice Center and neighboring communities is offering a rare glimpse of the human stories and songs locked away in our jails and prisons.

The film "16 Bars" follows a rehabilitation effort in the jail that invited inmates to write and record original music. Using a makeshift recording studio, four men were chosen to collaborate on an album with Grammy-winning recording artist Todd "Speech" Thomas, of the iconic activist hip-hop group Arrested Development.

The Recovering from Everyday Addictive Lifestyle, or REAL program, featured in the documentary, works with inmates who voluntarily participate. Using a behavior modification model, the program works to address the behaviors associated with negative or illegal lifestyles, while also equipping them with skills such as job preparation and budgeting so they can be successful. A component of the program, which is earned by hard work and excelling, is use of the recording studio, which provides an outlet for coping and an escape from the everyday cycle of jail life.

The program began under former Sheriff C.T. Woody Jr., who opened the doors of the jail to Resonant Pictures and Thomas as a way of documenting issues related to incarceration, substance use disorders and homelessness. The program was created in the jail in 2013 and in 2015, Real Life, a nonprofit, was founded as a means to continue to assist the men and women of the program with obstacles they face upon release.

Resonant director Sam Bathrick had interviewed Thomas in 2014 while making a documentary about the thriving arts scene in Atlanta, where they both live. A year later, Thomas' manager reached out to Bathrick about filming Thomas going into the Richmond jail and its recording studio, which had been featured on CNN. It took another year for Bathrick and his Resonant Pictures production partners to get to Richmond to begin filming and identifying characters.

"We were really moved by what we saw and heard and had incredible access thanks to the program director Dr. Sarah Scarbrough and former Sheriff C.T. Woody," Bathrick says. "Though he's not a central figure in the film, we learned a lot about what's not working in the criminal justice system from Sheriff Woody, who's had a front row seat for the better part of 50 years. He told us a few times 'You can't arrest away the problem.'"

The director says his goal was to tell a small story that would peel back another layer of the messy truth in a way that could humanize people whose humanity has been stripped away and hidden. He insists that the film is not telling people how to feel about the system, but rather the story of why these four men are in that system. The documentary follows them as they try to break out of the cycle of incarceration by answering that question in their music.

The creative process of making of an album provided an interesting backdrop for the film because the men were grappling with the pain of things they had experienced and the ramifications of pain they had caused in a raw and unedited way.

"Lyrics written in the isolation of a jail cell are basically like journal entries," Bathrick says, citing something Thomas says in the film. "What we capture is really one small snapshot of this moment in time for our country. My goal was to make it an honest picture."

The Virginia Film Office lent support to the project over the course of eight months of filming and seven months of editing. "16 Bars" was submitted and accepted to be screened at this year's Virginia Film Festival in Charlottesville as part of its Race in America collaboration with James Madison's Montpelier.

Eventually, the documentary will screen to the world's largest incarcerated audience at jails and prisons across the country.

"That's the contract we've signed by being taxpayers and essentially funding this system," Bathrick points out. "This film is the fine print most of us don't bother to read."