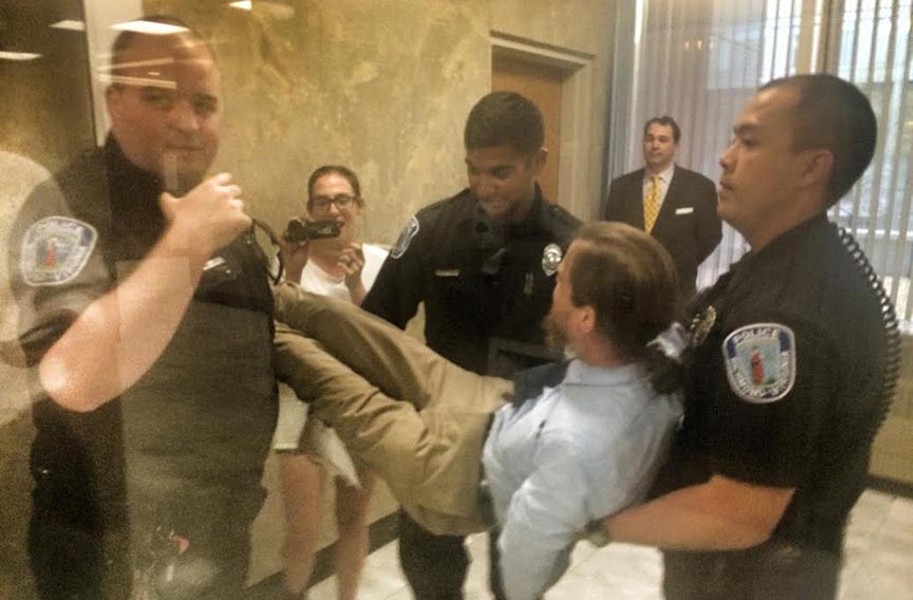 Ned Oliver Chris Dorsey is carried out of Richmond City Hall on April 14. The incident is causing City Council to rethink its meeting policies.

After three police officers carried a man with a gun out of a recent meeting, City Council members and staff have debated how to improve security in its chambers.

Among the suggestions is to ask the General Assembly to ban guns in government buildings.

The idea emerged Thursday during a committee meeting on government operations.

State law prohibits localities from passing ordinances that limit the carrying of firearms. It's legal to carry a gun in most places, though there are some exceptions, including schools and courthouses.

The chaotic meeting that sparked the proposal to add municipal buildings to that list happened April 14. There were numerous disruptions to the regular order that night. Council President Charles Samuels called a recess at one point, leaving the room when a man refused to yield during a public comment period. Later in the meeting, speaker Mo Karnage called Samuels a "dingo".

But the incident that seems to have caused the most concern is the removal of Chris Dorsey, a frequent attendee at council meetings who wears a handgun.

Before Dorsey, a frequent critic of the city, had a chance to speak, he sat in the area of the chamber reserved for news media. That prompted council's communications director, Steve Skinner, to ask him to leave. Dorsey asserted that he had the right to sit there because he posts about city politics on Facebook and YouTube.

During the exchange Skinner said he thought Dorsey pointed to his gun. Dorsey said he didn't. Skinner called over a police officer, who twisted Dorsey's arm behind his back and escorted him out.

Dorsey was issued a no-trespassing order, effectively barring him from City Hall. He told Style Weekly on Monday that he believed the order was invalid. He also said he wasn't sure if he would attend the meeting that night because his dog was sick.

Dorsey says he plans to sue city officials and police officers over his removal from the meeting and is meeting with lawyers.

The only immediate action City Council took after the incident was to close the media gallery, which is on the left side of the dais at the front of the room. It offers power outlets, desk space and a view of speakers addressing council members.

Last week Style Weekly and The Richmond Times-Dispatch both sent letters to council members opposing the area's closure to reporters.

While Style's publisher and editors opposed any changes to access, they suggested that rather than closing the gallery entirely council could look to credentialing policy such as the one used by the General Assembly.

Council members Ellen Robertson and Michelle Mosby responded that they supported the adoption of those credentialing requirements. Robertson asked council staff to draft a resolution for council to consider.

At Monday's council meeting, reporters were informed by a small sign that the gallery had been closed.