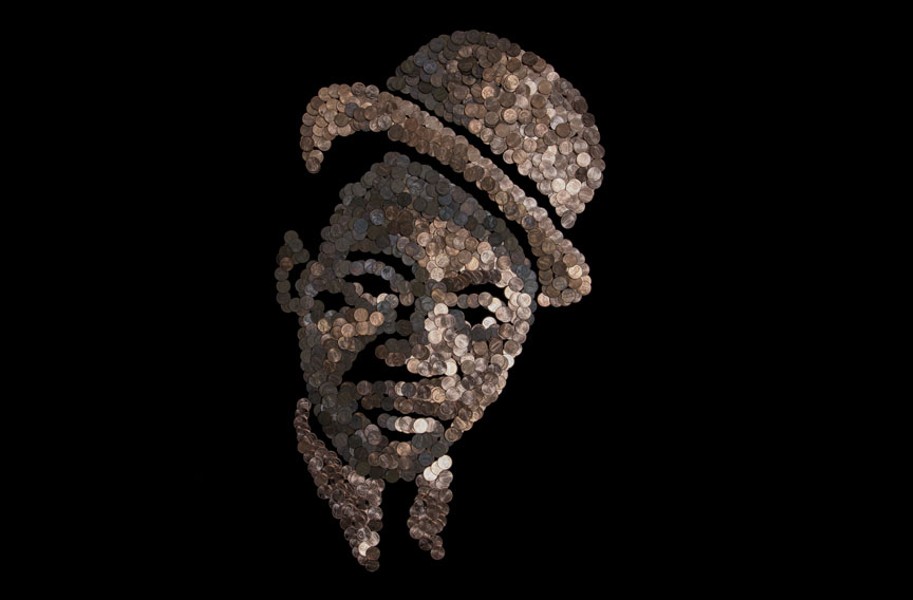 Noah Scalin, who was the first artist-in-residence at the Virginia Commonwealth University School of Business, created “Bojangles.”

If you ask about Jennifer Yane’s handmade button, she’s going to offer you one of your own. That’s why she makes Black Lives Matter buttons.

Yane, who is white, says a two-week race workshop made her aware of her inherent white privilege as well as a national complicity in institutionalized racism.

“White privilege is going out and not having to worry if you’ll come home again. That workshop was a wake-up call for me and it was before the election,” she says. “These unfortunate shared attitudes have landed us where we are now.”

But a conversation with artist Lynn Stevens after the election spurred her to action. When Yane commented that she thought the country was in an awfully bad place, she says Stevens’ response stopped her cold: “Why? Nothing’s different for blacks.”

Saying that it won’t be until whites start to feel injustice that things will change, Yane knew she had to do something. She recruited Stevens, who is black, and Anne Wrinn, who is white, to assist her in creating a Black Lives Matter art show.

“It was Lynn’s enthusiasm for this show and her reaching out to other artists that helped us move forward,” Yane says. She didn’t want their efforts to come across as white people doing a show for white people, but an inclusive and combined effort aimed at the greater community.

They aren’t members of Byrd Park’s First Unitarian Universalist Church, where a large, yellow, Black Lives Matter banner hangs on the front of the building. But the church’s multilayered history — which includes an art show every autumn and sponsoring racial justice workshops, training and panels — made it seem like an ideal venue.

The exhibition is being held in conjunction with the church’s Living the Pledge workshop series, which focuses on ending racism by educating Richmonders and fostering community conversations. The intent of the show is multifaceted, Yane says: to express the artists’ pain about racism, to continue teaching others about how racism exists in the country and especially to show support for all people of color — “except orange,” she jokes — so that they know they matter.

It’s also to raise money for the movement that grew out of a hashtag, because a percentage of the funds raised by the sale of each painting will be donated to Black Lives Matter. The artistic organizers won’t deal with any of the financial end, instead allowing all sales to be handled between artists and patrons.

“Our goal is to raise awareness of racial inequality by allowing the artists to be topical, to make some kind of statement about what’s going on and let them decide what percentage will go to the movement,” Wrinn says. “We’re asking them to let their conscience be their guide. But what matters is that the profits are benefiting Black Lives Matter as well as local artists who are so often asked to participate with no financial benefit for them.”

Among those contributing are Noah Scalin, Michael Pierce, Wolfgang Jasper, Ana Edwards, Dennis Winston, Cas Overton, Evaline Jones and Stevens, Yane and Wrinn, all of whom set out to create work that addressed the country’s racism problems in a productive way.

“For me, most art is political,” Pierce says. “Especially art that deals with identity issues as so much art today does. The best art causes us to see things differently, and by ‘seeing,’ I mean conceptually, emotionally, politically and morally. The difference in perspective experienced through art causes us to think differently and that, in turn, can change us morally.”

Yane agrees. “There’s an old phrase, ‘If you’re not part of the solution, you’re part of the problem’ — and it’s especially true now,” she says. “By not educating yourself, you’re allowing racism to continue and that’s why we’re doing this show.” S