Seattle Seahawks fans may still feel the sting of this year’s Super Bowl loss, but a new book captures the energy and passion of the 2014-’15 season in a way that might ease their suffering.

The book “12” is photojournalist and artist Robin Layton’s impressionist take on football fandom with 88 images documenting some of the most dedicated fans in the National Football League. The title comes from the nickname given to the Seahawk’s ardent supporters, the 12s.

But these aren’t crystal-clear action shots of face-painted fans, midspittle. The images are impressionist, serene — the famously loud crowds of CenturyLink Field muted in brilliant colors and conceptualized movement.

“Literal photographs of football have been done for decades,” Layton says. “I wanted to do something different, something that has never been done before.”

There’s a puzzle to deciphering the photos. Many are abstract collages and reflections of blue and green. Anyone who’s seen a football game will know the scenes, but Layton’s photos offer fresh perspective.

Wide shots of a packed stadium turn people into shimmering confetti, and crowds blur into the helmet of a foreground player. Some of the best photos appear truly painted, as though 19th-century brushstrokes found beauty in the mesh of an oversized football jersey.

Born and raised in Richmond, Layton moved to Seattle 20 years ago and was swept up in the excitement of the Seahawks’ first Super Bowl victory in 2014. As a passenger in a car on the freeway, she took a blurred picture of a pedestrian with a Seahawks flag and an idea was born.

“The team was leaving for the Super Bowl in 2014,” she recounts. “We turned the car around and I took some pictures of that.” And when the team returned triumphant, she snapped photos of joyous Seattleites at the parade.

Layton showed Seahawks coach Pete Carroll her early work and was invited to photograph home games that season, which was capped off by another trip to the Super Bowl. “You see the town getting really close during the bowls,” she says.

The result captures that closeness in a visually stunning book, a timeline through game day, from the anticipation of arriving crowds, to touchdown calls and post-win celebrations.

One compelling picture has a large, foreground referee, his steely glare and spooky countenance set against the stadium masses. In another, cheerleaders are a composition of pink boots, pom-poms and short shorts that elevates the subject from objectification to art.

The book’s foreword is written by Hall of Famer Steve Largent and is punctuated with quotes from players, former players and fans, including one from Seahawks quarterback Russell Wilson extolling the virtue of the 12s.

A J.R. Tucker High School graduate, Layton sees herself as a kindred spirit with fellow Richmonder Wilson. “Our philosophy in life is the same,” she says. “He always says ‘why not us’ [to his team], and I always said, ‘why can’t I.’” She credits this approach for her success as an artist and photojournalist.

The technical achievement of the book is that the images were created entirely within the camera without filters. “There are no effects, no manipulation,” Layton says. “It’s pure, it’s what happened. Getting it is a very challenging thing to do.”

She says she took more than 100,000 images, and “never knew what was going to be on the film when I got home.” Her favorites were ones where something unexpected came out, like one from the sidelines where the players’ uniforms appear to merge with the background.

No stranger to sports photography, Layton took an iconic photo of Ken Griffey Jr. at the bottom of a celebratory pile in 1995, and her 2014 series, “Hoop: the American Dream,” explored basketball across the United States.

She knows the pitfalls, too. While shooting this book field-side, she was bowled over by players a couple of times, she says: “Marshawn Lynch ran me over pretty good once.” 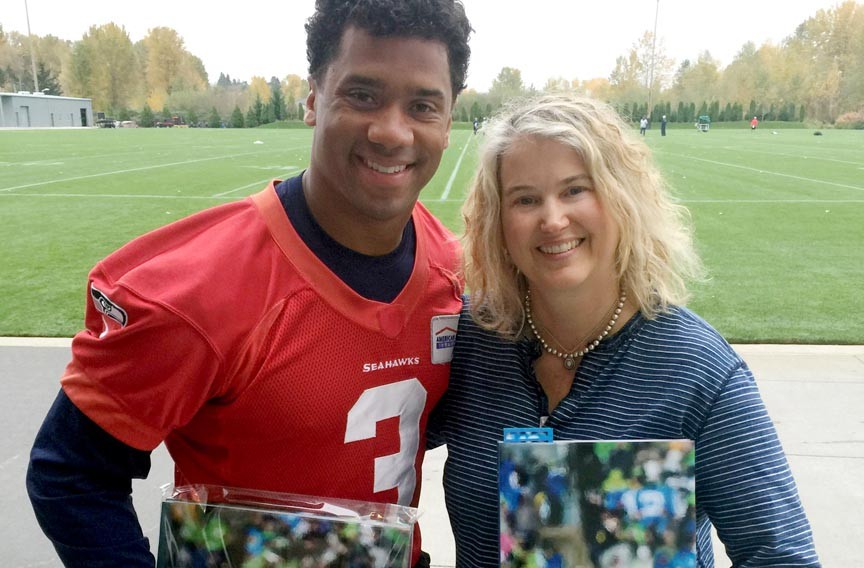 Though she’s promoting “12,” Layton now concentrates on fine art photography and celebrity clients who include Oprah Winfrey. But first, there’s a scheduled stop in her and Wilson’s hometown.

“There are so many Russell fans and Seahawk fans in Richmond,” she says. “It’s like a reunion for me.” S