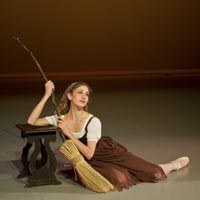 Cinderella's a winner. I mean, the girl herself, of course, who gets her man and shows up her obnoxious family through sweetness and purity alone; but also the Richmond Ballet's production of her story, staged over the weekend at the Landmark Theater. With sensitive, engaging choreography by Malcolm Burn and excellent character acting by the ensemble, all accompanied by Prokofiev's delicious score performed by the Richmond Symphony, “Cinderella” (which premiered in 2000) is a highlight of the ballet's collection of story ballets.

The Cinderella story appears in many different guises across cultures (an Egyptian version dates from the sixth century B.C; a Chinese version from the ninth century A.D.). RB's production is based on the familiar European version of the tale, as written by Charles Perrault in 1697. Burn is a scrupulous researcher, and his understanding of the story's universal appeal lends his choreography a richness and emotional resonance particularly satisfying to watch. Cinderella (performed on Friday by Valerie Tellmann) dances with lively grace (Tellmann shines in her allegro variations) or pensive lyricism, depending on her mood. The fairies' footwork sparkles through spiraling turns or dazzles in high battements and successive leaps precisely on the swelling music.

At the ball, Burn treats us to a lovely example of his deft handling of large group scenes. During the waltz, the stage fills with swirling couples performing quick lifts and easy swings with arms around each others' waists (to a sprightly, rather than stately, tempo). In a magical moment at the waltz's conclusion, the four fairies arrive, under the leadership of Lauren Fagone as the benevolent godmother, bourrAceing soft as silk through the frozen crowd.

Acting is as critical to the success of this ballet as dancing, and RB's well-coached performers do not disappoint. Cecile Tuzzi adorns her absurd Stepsister role with brilliant comic timing, in hilarious partnership with Christopher Nachtrab as the other sister. Thomas Garrett's long legs and gorgeous lines serve him well as the elegant and exasperated dancing-master to the two sisters, with Jesse Bechard as the wizened violinist. Utterly enjoyable also are Susan Israel Massey as the snarling Stepmother, and Bob Murdaugh as the meek, tender-hearted Father.
Tellmann as Cinderella demonstrates an affecting sensitivity to touch -- when the beggar (her disguised Fairy Godmother) caresses her cheek, and later when the Prince (danced Friday by Igor Antonov) takes her hand from behind, her face changes and her body softens in response. And it is in moments such as these that the power of the story, so often blurred by archetype and over-familiarity, comes most alive.