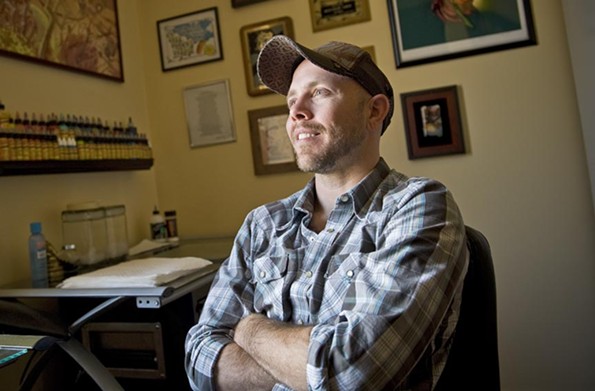 "Get the fuck out of here," Smith scoffed. But the call was real. So despite his hesitations, he said yes to appearing on Spike TV's popular tattoo competition show — its highest-rated original series. "I knew that if I didn't do it," he says, "later on down the road I would regret it. Or I'd always wonder what would have happened."

The 35-year-old joined 15 other tattoo artists battling for a $100,000 prize. The competition consists of a series of challenges in which each artist must sketch and execute a tattoo in a specific style.

Smith's brash, cartoonish work leaps out from the realistic portraits and sugar-skull babes in the competitors' portfolios. His style emerged from a youth spent doing graffiti in Heidelberg, Germany. His first clients made simple requests, such as, "I want a bunny rabbit tattooed on my arm." But Smith longed to create more depth in his work. He began to imagine a place called Ferchett's Island — one territory in Carkayous, a much larger world inhabited by other artists' creations — in which his animal characters lived. Clients who choose to be a part of Ferchett's Island get a full story on their skin.

The most striking example of Smith's work may be a tattoo called "Killick Falls Lagoon," a swirling underwater fantasy populated by pearl-diving squirrels, green mermaids and mermen and other creatures. Covering a woman's entire back and legs, the piece took almost 10 years to complete.

After years spent bouncing from city to city, Smith settled in Richmond after graduating from Virginia Commonwealth University. He opened Loose Screw Tattoo in Carytown in 2011. "For the first time in my life," he says, "I actually have a home."

Leaving the studio for weeks of filming in New York City was tougher than he expected. "I've never really understood what anxiety is until I got in front of the cameras," Smith says. And after 10 years of working exclusively in his style, he says, he wasn't prepared for the diverse challenges the show demanded, such as traditional tattooing and Japanese styles.

The judges, including Jane's Addiction guitarist Dave Navarro, could be cutting. But "for the most part," Smith says, "it was easy for me to take their critiques simply because I agreed with a lot of the stuff they said."

How far did he get? He can't say — and anyway, the outcome hasn't been decided. The live finale airs Dec. 18.