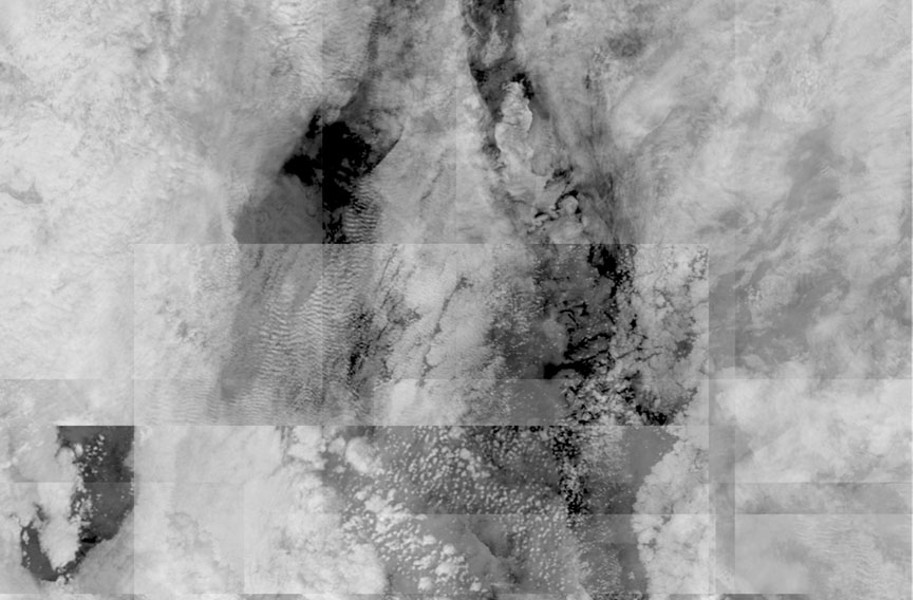 The similarities between Wyoming and Richmond might not be immediately obvious to anyone except artist Carli Holcomb.

Growing up a self-proclaimed outdoor kid in Wyoming, Holcomb recalls packing up to join her parents’ weekend fly fishing jaunts on the Green River. She saw the move to Richmond in 2014 to attend grad school at Virginia Commonwealth University as serendipitous because it was the James River that allowed her to fall in love with Virginia.

“I learned all my best life lessons along a river bank,” she explains.

Now Holcomb has taken her love of the natural world and shaped it into a body of work titled “After Dark” at the Visual Arts Center. The process began a year ago when she was selected for the first residency offered by Quirk Gallery and the Visual Arts Center, which included access to a studio for six months. When the residency ended, she was thrilled her studio time was extended for another six months, because by then she’d fallen in love with the shared energy of working in a communal space.

Prior to that period, most of her work had been three dimensional, but with the residency she began trying her hand at two-dimensional works and now they’re a big part of her practice. She exhibited her two-dimensional work for the first time last fall with a show called “Black Moon” at Quirk Gallery.

“It was such a beautiful transition from grad school,” she says. “It allowed me to lay down a foundation within the art community.” Specifically, she got an opportunity to get to know local galleries as well as art patrons who purchased her work, while using free time to indulge her outdoor interests exploring the river and surrounding trails.

Quirk Gallery’s manager, Adam Dorland, sees much of Holcomb’s most recent work as attractive to collectors because it combines so many facets of her talent. “Carli is able to oscillate between her skill sets as a metalsmith, an installation artist, an engineer and a fine artist with great technique,” he says. “The work resonates with everyone because, somehow, Carli has figured out a way to present work that is both abstract and representational, right-brained and left-brained, contemporary and accessible.”

Although only a few pieces sold during the “Black Moon” exhibition, since then sales have picked up considerably. “Carli has been so good about bringing us fresh work to feature in our Archives, so her work has received a lot of attention,” Dorland explains. “We’ve recently matched a few of Carli’s pieces with clients and collectors.”

Holcomb sees her current show as a meditation on place — and the art she created for it as memory maps reflecting both where she grew up and where she lived as an adult. “In them, the Green river merges with the James so you can’t separate them,” she says. “Working with satellite images, I connected with both places I call home now.”

In addition to NASA weather imagery, she uses objects that are significant to her such as a diamond from her mother’s wedding ring and driftwood collected along both rivers. Mostly, her goal is to work with natural materials and replicate some version of nature, something seemingly terrestrial, but unknown.

“Everything is and isn’t what it seems,” she acknowledges. “I used a log from the James, but altered it so it doesn’t seem like what it is. Everything in the spaces is altered.”

The spaces she’s referring to are the three rooms of the True Luck Galleries in the Visual Arts Center, which can be tricky for artists given the walls aren’t straight and feature some pretty unusual angles. In many ways, Holcomb felt as if she was crafting three exhibitions, and it wasn’t easy. “I had to coordinate my ideas under one big umbrella and that was definitely a challenge,” she says of combining two- and three-dimensional work.

To her way of thinking, the moments after dark are similar to the moment life begins. The show’s focus on looking back on life, the planet and her past are intended to reflect her origins and those of the planet by using materials of the earth. Holcomb says the piece “Confluence” is about memory and demonstrates how we each have our own set of navigational points that together, shape our worldview.

“Wyoming and Virginia are places on my own individual map, and I was layering those maps in my work just like in my own life experience,” Holcomb explains. “I was creating impossible places that didn’t exist except in my own experience.” S