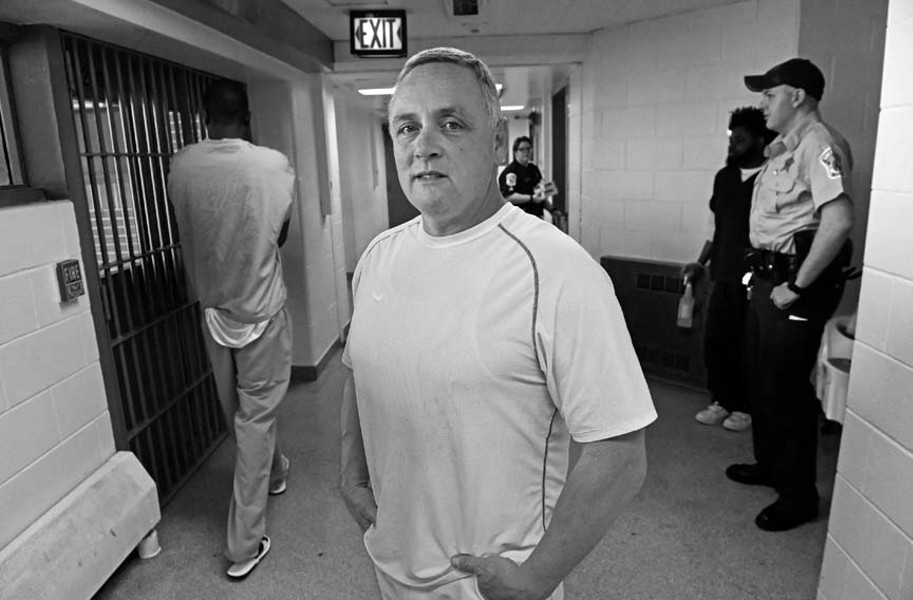 Linwood Redford tried his first line of cocaine with his father, as a teenager.

It’s a habit the 47-year-old thought he’d kicked when he had his first of three sons a few years later. But addiction is a demon that resurfaces. And decades later, the problem morphed into a seemingly unconquerable dual dependence on cocaine and heroin.

“Somewhere during the process of my addiction,” Redford says, “I lost the ability to live life, to play golf, to go fishing.”

At some points, he says, the cycle was to work, pay bills and use: “That was my life.”

Through Redford’s 20-year battle with addiction, brief periods of sobriety offered little hope. He failed a first try at a Henrico County jail substance abuse program called Recovery in a Secure Environment, known as RISE. After a petit larceny charge in December landed him back in the county jail, he says he forged toward recovery again.

That was when a county judge ordered him to take another try at rehabilitation. But it was in a new program of the Henrico jail tailored toward addiction to heroin and other opioids.

“I said, ‘I’ve got to do something and head in a new direction here,’” he recalls.

With the number of arrests and overdoses mounting locally, law enforcement also is headed in a new direction to help those struggling with heroin addiction.

So far in 2016, authorities in Richmond and the counties of Hanover, Chesterfield and Henrico have reported a suspected 37 opioid-related deaths. It’s estimated that a minimum of 181 users overdosed but survived.

It’s a difficult battle. Opioids are a class of drug that reduces pain signals traveling to the brain, including heroin and prescription medications such as hydrocodone and oxycodone. Addiction to them is a tenacious disease, because the drugs cause more physical dependence in users than most other drugs. Heroin use often starts as an addiction to pain medication. But many addicts switch to heroin because of its affordability.

The sheriffs of Henrico and Chesterfield counties are zeroing in with rehabilitation efforts for inmates who are addicted to heroin or other opioids. It’s a shift in strategy: Both have offered general drug recovery programs, but recently have found that special focus was needed to combat the heroin epidemic.

The grim statistics have launched a focus on treatment over punishment. And the increasing financial pressures that recidivism puts on the criminal justice systems are pushing officials toward alternative solutions.

“People argue incarceration over treatment. I say incarceration is the best time for treatment,” Henrico County Sheriff Mike Wade says. “It’s about shifting where people’s views are. I would like to see every jail have some kind of jail treatment program.”

Wade, who is mounting a run for Congress in Virginia’s 4th District, stresses improvements to mental health and drug treatment as part of his platform.

His office launched ORBIT, or Opiate Recovery by Intensive Tracking, when the number of inmates in the jail’s heroin detox wards approached 1,400 last year alone. Wade opened the wards in July 2014 with the aim of helping addicts through withdrawal in a controlled environment — a process that lasts at least two weeks.

Inmates in detox are encouraged by former inmates who have been through jail recovery services to enter the program following withdrawal.

The program emphasizes the intense counseling and peer support that already was being offered by the Henrico sheriff’s office at Jail East, in New Kent County, under RISE.

But the newer program adds a job-training component at Henrico’s Jail West, and closely follows participants on release. Inmates are put to work on various county capital projects. When inmates show indicators of progress — such as good behavior and a desire to make life-changing decisions — they’re found employment outside of the jail. The inmates also are monitored on home incarceration, which includes constant drug screenings, monitoring and GPS trackers for some. The Sheriff’s Office has partnerships with various businesses throughout the county who are willing to give the inmates a shot.

In all, the program lasts one or two years. Most participants weren’t arrested for heroin or opioid possession, but for crimes related to drug use, such as grand larceny or prostitution.

As far as cost, Wade says that his office hired no additional mental health professionals or deputies to facilitate the program. He says fewer deputies are needed to oversee RISE at Jail East because of the good behavior of inmates, which saves about $240,000 annually. Inmates on home incarceration pay the county $10 a day, which makes this program component self-sustaining. The county also saves money by not hiring outside contractors for many capital improvements and landscaping tasks.

Redford is the first in an inaugural class of 29 inmates to walk out of the Henrico County Jail for the program’s final stage. He’s back at work, using skills as a professional painter that he also taught other inmates.

He says he feels like he has a fighting chance to stay clean because of the additional support provided after leaving the jail cell, and that it’s more intense than the traditional option of probation.

“It’s a team of people who seem to be assembled to help me have a successful path,” Redford says. “[But] ultimately the decision is mine.”

The Chesterfield County Sheriff’s Office works through a peer-guided program it started in late March.

Sheriff Karl Leonard partnered with the McShin Foundation, a Henrico nonprofit that guides inmates through a process of reconciling past decisions.

The program’s 21 inmates volunteered for the help. They hold group discussions and receive self-improvement assignments. Participants listen to speakers who emphasize dealing with denial and other psychological factors that hasten abuse.

The inmates are encouraged to bond and help each other through the process by living together in a separate unit and sharing meals. Two recovering addicts, paid as counselors by the McShin Foundation, are there to offer hope for life beyond the jail cell.

The office estimates that the program will cost about $30,000, which will come out of its budget and from McShin. And inmates are encouraged to keep returning for the counseling if it’s still needed following release.

“In a way it’s different,” Chesterfield’s Lt. Stephen McLeod says. “It’s more of Sheriff Leonard recognizing a problem and finding a solution for the reoccurring effect of individuals who go and commit crimes to find the money for these drugs.”

Richmond’s jail, called the Justice Center, recently launched an effort to combat drug addiction. Officials are approaching the issue not by focusing specifically on opioid addiction, but on overall substance abuse.

In May 2014, the Richmond Sheriff’s Office launched recovering from Everyday Addictive Lifestyles, or REAL. The behavior-modification program is intended to help inmates build healthy coping skills and break down destructive thought patterns that lead to addiction.

It’s too early to tell if the fledgling efforts of the opioid treatment programs have made a dent. Chesterfield’s Leonard plans to keep up with the inmates to see how they’re progressing upon release. In Henrico, Wade is considering asking college researchers to chart the long-term impacts of treatment.