VCU Rams are headed into March Madness -- what to expect on Friday. 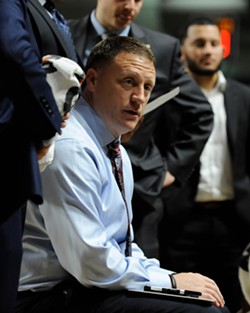 To cap off a weekend that started rough, Sunday's good news came just after 6 p.m., via the Selection Sunday broadcast on CBS. The Rams are dancing again.

After a one-year absence from the field of 68 teams in the NCAA Division I Men's Basketball Tournament, Virginia Commonwealth University is back in the brackets. VCU is making its 17th NCAA appearance and the eighth in the past nine seasons.

Accordingly, in the East Region on Fri., Mar. 22, at approximately 9:40 p.m., VCU's Rams (25-7) will meet the Knights of the University of Central Florida (23-8). The game will take place at the Colonial Life Arena in Columbia, S.C. and will be live broadcast on CBS.

The Rams are seeded eighth in the East, mostly by virtue of winning the regular season title of the Atlantic 10 Conference with a 16-2 record. The ninth-seeded Knights came in third in their league, the American Athletic Conference. Having been eliminated from their respective conference tournaments, both teams were at-large invitees based on their overall records.

Back to that rough start for VCU: On Friday afternoon its first-team all-conference player, junior guard Marcus Evans, was scraped up off the floor and helped to the locker room. He couldn't put any weight on his left leg. That stunning blow happened in the first half of VCU's first game in the A-10 tournament in Brooklyn.

One of Evans' teammates, in particular, stepped up and turned in a remarkable performance. Sophomore forward Marcus Santos-Silva scored 26 points and grabbed 22 rebounds. Nonetheless, it wasn't enough to make up for some sub-par performances by others. By a score of 75-70 Rhode Island eliminated VCU.

On Saturday, just after 3 p.m., the good news came via email from VCU's athletic department. Head Coach Mike Rhoades said, “Marcus had an MRI this morning and met with our team doctors. There is no structural damage and he is working with our trainer to be ready to play in the NCAA Tournament.”

Whether Evans can play, or not, Rhoades doesn't buy into the thinking behind the cliché that March Madness is a whole new season. Instead, he sees a process of sculpting a team: the preseason preparations; the learning; the practicing; the overcoming of obstacles; the buying into an approach. And, as always, getting better at execution.

At a recent presser at the Siegel Center the coach said, “All the experiences make you who you are ... going into March Madness we're going to use all those experiences.”

Rhoades' coaching credibility was just buffed by being named the A-10's Coach of the Year. Only twice before has VCU had its head coach win such an award. They were Sonny Smith (1996) and Anthony Grant (2007), both during VCU's stint in the Colonial Athletic Association.

Coach Rhoades has grown fond of speaking of his team as an “army.” In part that characterization reflects the coach's scheme to use his bench more liberally than do most of his coaching counterparts. It also speaks to the confident, aggressive style the Rams use in playing a 40-minute basketball game.

“Our bench has played meaningful minutes all year long," said Rhoades. “It's what we do. We're going to use that army.”

The Rhoades army moves all-out fast. Which means given the pace he wants, especially with all the overplays on defense, to keep them with fresh legs he has to use 11, even 12 guys. No one gets 30 or more minutes.

The A-10's preseason media poll predicted a seventh-place finish for the 2018/19 Rams. Now facing the prospect of playing teams packed with much-sought-after recruits, Rhoades' players don't mind mentioning how much they have exceeded expectations. However, they must know it was mostly their crushing defense, which held opponents to 61.2 points-per-game – good for seventh in the nation – that made for that 12-game win steak to close out the regular season.

About his scheme for allocating playing time, Rhoades said, “The best thing about it is our guys bought into it: All right, I may not play 21 minutes a game. I'm going to play 16 and I'm going to play harder. And, it's a lot of fun playing this way – it's great for morale!”

The defensive effort of Rhoades' army isn't likely to be blamed when VCU loses its last game of the year, assuming it eventually will lose again. More likely it will be a cold shooting performance. But if the Rams are loose and shoot well on Friday night, the Knights will have their hands full.

Then, if VCU wins, it will likely face Duke on Sunday. Yes, that Duke. By the way, UCF's center, Tacko Fall, is 7-foot-6.

The best news: It's time for some madness.