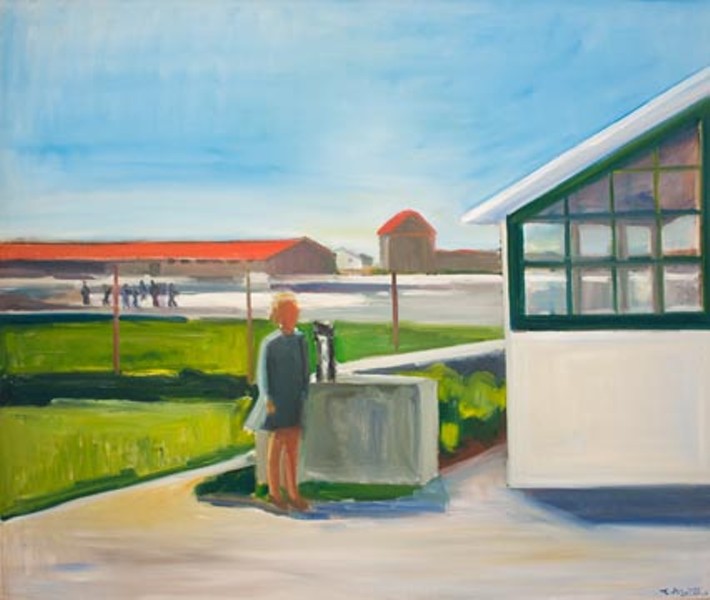 Raised in Richmond, she had just finished studying at Richmond Professional Institute, now Virginia Commonwealth University, and couldn’t wait to shake the small town dust off her boots.

“My mother said she hopped on a train to New York City and never looked back,” says Alice Livingston, daughter of the late Reynolds Gallery founder Bev Reynolds and currently its co-director.

Blaine began to exhibit at the Reynolds Gallery in the early 1980s, the same point at which she and Reynolds began a devoted friendship through years of correspondence based on their mutual love of contemporary art. Although Blaine never moved back, she was clear in her letters that she would allow only her best work to be shown in Richmond.

Intended to commemorate three female pioneers of 20th century art, the opening exhibition of the fall season at Reynolds devotes one side of the gallery to Blaine’s oil paintings and watercolors, while the other side will display works by Louisa Matthiasdottir and Janice Brustlein, who signed her paintings and became known as Biala, the town where she was born in Poland.

Although they have their own distinct styles and originate from vastly different places — Richmond, Poland, and Iceland — Blaine, Biala and Matthiasdottir shared an abstract expressionist style, keen eyes and fluid interpretation. A big part of both Blaine and Matthiasdottir’s motivation for moving to New York in the 1940s was to take classes from renowned abstract expressionist painter Hans Hoffman.

According to Reynolds co-director Julia Monroe, the trio captured vignettes of rolling hills, bouquets of flowers and domestic scenes with simple brushwork and brilliant yet harmonious colors that impart a sense of security and candor to the post-World War II era.

“Nell was a fierce, tough-skinned woman fighting to be part of the scene in New York,” Monroe says. “She fought to get into Hoffman’s classes.”

Biala was slightly older, and although she was aware of Blaine and Matthiasdottir, she wasn’t part of that group. Splitting her time between New York and France after leaving Poland, she was part of the midcentury modern movement and had the good fortune to know Gertrude Stein and make studio visits to see Henri Matisse and Pablo Picasso at work. 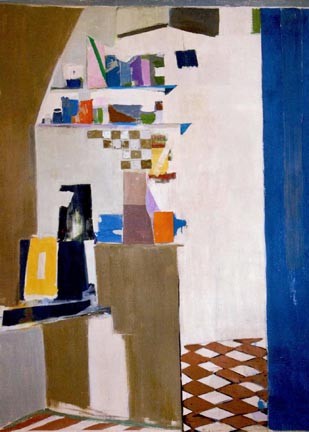 The show is an ode to vibrant, beautiful colors, whether seen in the riotous flowers and fruit of Blaine’s “Eudora Room,” the geometric red and white tile floor of Bialy’s “Blue Kitchen” or the deep green table that frames Matthiasdottir’s “Still Life with Squash.”

Blaine’s art can be divided into two distinct periods: before and after she nearly died contracting polio during a trip to Greece in 1959. She was told she’d never paint again. Intensive physical therapy enabled her return to oil painting the following year. She’d trained herself to paint with her left hand — but her subject matter shifted.

“It was then [Blaine] began to focus on painting garden and still life scenes from her West Side apartment, her house in Gloucester, Massachusetts, and from a friend’s house in St. Lucia — more contained paintings,” Monroe says. “The way she handles transparency and reflections is so beautiful.”

Three pieces in the exhibit were done before the devastating trip to Greece, and they radiate with a style and palette the later works do not.

“These early works aren’t what I thought about when I thought of Nell’s work,” Livingston says. “The way she puts colors together is more related to abstract expressionism. Yet some of her best work was done after the polio.”

As for their 20th-century pioneer status, all three women were notable for their willingness to hold their own in an art world dominated by men. Monroe says they had to be tough, strong and absolutely committed to their art.

“They were fiercely loyal to each other and determined to survive,” Livingston says. “All women have that. We want to make our mark and prove we’re worthy.” S