What does the future hold for Richmond's home of sonic cool?

Adventures in the Used Trade (or Nine Times Nine)

1 The 1995 in-store appearance of a rock band named No Doubt, featuring Gwen Stefani. The then-semiobscure group's breakthrough disc, "Tragic Kingdom," had just been released, and the event drew a crowd so big that people were standing on the product bins.

2 The outdoor Watermelon Festival in 1997 — with a temperature topping 100 degrees — was less like working in retail, more like serving in the French Foreign Legion.

3 A former New York resident brought in a Miles Davis record with a personal letter from the trumpeter written on the back cover.

4 Someone brought in a Mitch Ryder album with a very intimate, highly detailed love letter on the inside.

5 Three pristine batches of like-new soul 45s from the early 1970s — the inventory of a closed Church Hill record store.

6 A city employee provided a steady supply of unopened, brand new CDs that he found at his workplace: the city dump.

7 A treasure trove of old 78s found in a barn out in Caroline County. The music was great, the records all smelled like hay.

8 For his in-store appearance, singer James McMurtry spurned the stage and played his entire set standing on the checkout counter. 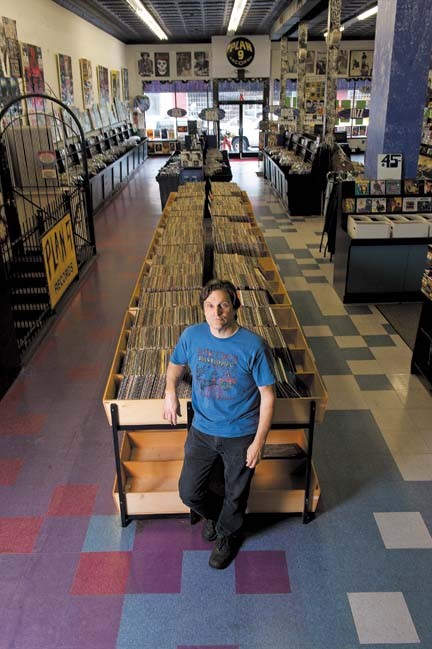 In the movie "Plan 9 from Outer Space," aliens reanimate zombies to stop humans from inventing the photon bomb, a device with the potential to destroy the universe by exploiting the universal web of electromagnetic connections. Absurd science, maybe, but it's not the worst metaphor for the digital dismemberment of the music business.

The inspiration for Richmond's archetypal cool record store was born when founder Jim Bland attended a showing of Ed Wood's transcendently awful film at cofounder Dave "Pedie" Kurzman's house in 1981. There are numerous references to this integral movie scattered through the eclectic chaos of Bland's corner office at the Plan 9 warehouse. There are also musical posters, Beatles cutouts, boxes of paper, stacks of CDs and DVDs, an Elvis bust wearing Mickey Mouse ears, a Hank Williams bobble head, and two Godzillas facing off on a windowsill that offers a 180-degree view of the surrounding industrial district just south of The Diamond.

"We started just before the CDs hit," says Bland, trim in a slightly vintage Richmond Folk Festival T-shirt (Plan 9 is a prominent backer and Bland sits on the programming committee); he wears the same haircut he had 30 years ago when the store opened. "At first all our CDs fit on a single shelf. Soon people started selling their vinyl and buying CDs. We were in the sweet spot in that transaction."

From its original location across from the Byrd Theatre, the Carytown record shop has moved several times while the business grew to 10 locations in five cities (the 9 is back to two stores, the other is in Charlottesville). The downstairs used section in Carytown is closed, stock has dwindled and the business is looking for a smaller space.

"It was a big wave to ride," says Bland, whose brother, Jeff, has worked at Style Weekly since 1989. "Every 20 years there was a new physical format ... 78s, LPs, cassettes, compact discs. Then the little discs they came up with didn't catch on, and downloading music was so easy. At first it was great for the guys behind the curtain pulling the strings — until people realized they didn't have to pay. The next wave is litigation, shutting down the download sites. Then at least the artists get paid."

Ultimately, Bland says, the download war is a losing battle — as soon as one website is taken down, another pops up to take its place.

But for Plan 9 the saving grace has been the back-to-the-future renaissance of long-playing vinyl albums. "At last year's Record Store Day there were 50 new vinyl releases," Bland says. "This year there were 200."

The new releases aren't just appealing to aging baby boomers looking to get a reissued Beach Boys album on 180-gram virgin vinyl, he says. "Who would have thought we would have young girls coming in to buy a 12-inch remix of a Duran Duran single, with an otherwise unavailable song on the B side," Bland says. "Who would have predicted that 7-inch singles would make a comeback? Or picture discs? Or colored vinyl?"

Bland sees the resurgent LP market as split between collectors, for whom it is a hobby, and fans, who just want everything that a band recorded. For collectors the key is authenticity. Getting a release in its original form, the original pressings are like first-edition books. Even some CDs, if they're the initial release, bring high prices. For the fans, new releases often have a download card or CD disc included with the package. Listeners can get the digital product and the full-blown experience of the LP packaging.

Both fans and collectors' groups made Plan 9's recent Record Store Day a success. The Drive By Truckers played in the Charlottesville Plan 9, and rock legend Neil Young shopped at the Carytown store. It was great fun, but the future remains uncertain. The LP revival has the feverish enthusiasm of a fad. Artists are innovating to keep new releases appealing; Lucinda Williams enhanced her current CD with a second of rough-cut demos of the songs; Paul Simon's latest includes a DVD. But there are significant challenges for a store with the inventory of Plan 9, which stocks both the flavor-of-the-month hits while trying to maintain a relatively deep inventory. The margins per unit have improved, but the products (especially LPs) are no longer returnable. "If you are not careful what you buy you can get into trouble fast," Bland says.

And the revived LP market has brought competition. A blossoming of used record stores, most started by former Plan 9 staffers, has sprung up around town. Bland, recalling the support he received from his former record store employer when he started Plan 9, has nothing bad to say about ex-employees encroaching on his market. His bigger concern is with big-box stores and online retailers who have a loss-leader mentality. "We feel pretty good when we can sell a CD for $9.99," Bland says. "Then we look online and see Amazon is selling it for $5 as a loss leader. Best Buy sells CDs below cost hoping that someone will also buy a big-screen TV. The distributors are still making money, but ultimately it hurts everybody."

To those who were there at the beginning, in the original cramped location, searching through cardboard boxes of otherwise impossible-to-find records, Plan 9 seemed an impossible musical oasis. How could it realistically last when much more commercially conventional record stores were as fleeting as mayflies?

When the store was a regional independent music powerhouse, who would have thought that the basement "Crypt" would one day close, its used stock moved upstairs to fill the void left by diminishing new inventory, or that it might be a good idea to post a big sign that Plan 9 was not, in fact, going out of business? Three decades on, the precarious startup business has become a precarious music institution. Why should the future be any more predictable than the past?