REVIEW: Pizza and Beer of Richmond

With its expansive patio and bar-style menu, PBR knows its audience. 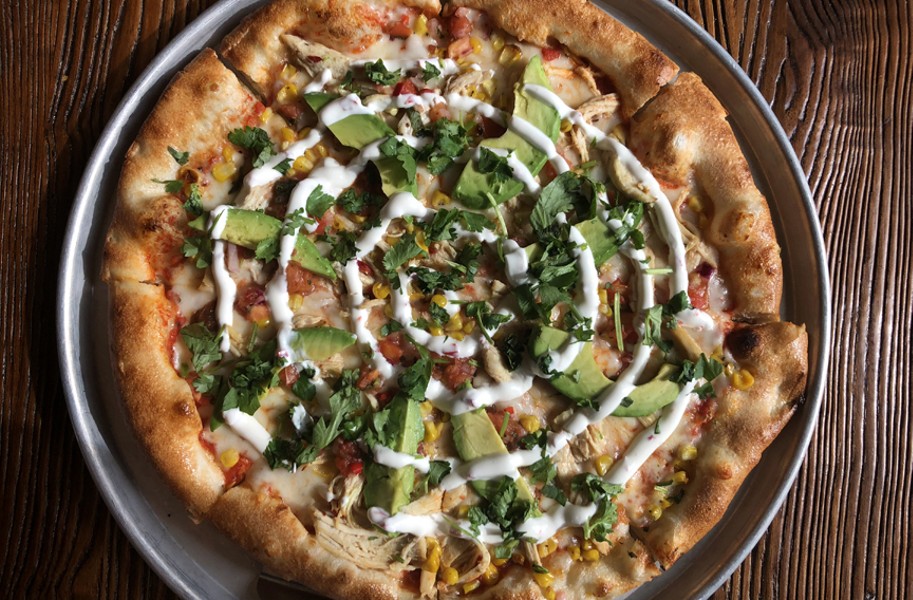 Not every neighborhood restaurant aspires to cater to everyone in the neighborhood. An eatery may be surrounded by homes, but its vibe, food and beverage offerings and even décor offer the best indication of the crowd the management is trying to attract.

Every time since May I've been by PBR — that's Pizza and Beer of Richmond, by the way — I couldn't help but notice the dozens of people milling about outside on what has been touted as the largest patio in the city. Beers in hand, people looked to be engaged in loud conversation or playing corn hole, a combination that reeked of a post-college party vibe once removed from a frat kegger.

But perhaps I'd judged too quickly. Once inside the casually industrial space, I spot a young family with a toddler and newborn having dinner together. A woman walks in carrying a bouquet of birthday balloons, followed by a companion toting gifts encased in brightly-colored children's gift wrap. At lunch, business people at nearby tables discuss promotion possibilities and sales goals while half a dozen big screens continuously deliver sports, news and sitcoms.

Perhaps PBR does want to be all things to all people. Certainly the 48-tap-strong beer list ($5-8) casts a wide net with categories including RV-AYeeeeee for city beers, Two-up, Two-down for Virginia brews, 'Murica for the brewing community at large and exactly two Across the Pond selections. Watching your waistline? Besides the alcohol by volume percentage and the international bitterness scale rating for each beer, calories are also listed. Half a dozen beer cocktails further enlarge the possibilities. For the hops-hostile, cocktails ($9) and wine ($6-8 glass, $22-28 bottle) also make appearances on the menu. And while people may have once gone to bars to get away, PBR's extensive J-shaped bar with multiple outlets ensures that your device will never go dark while you're drinking.

Visible outside through the wall of windows and a design focal point inside, the Marra Forni copper-topped pizza oven promises great pie. And it would probably deliver if just one of the pizzas I ordered had been fully cooked, but not one was. Between the Jam ($13) laden with prosciutto and fig jam, a classic Margherita called the Basic Instinct ($11), the white Total Eclipse ($12) boasting caramelized onions, sun-dried tomatoes and cremini mushrooms, and the Godfather ($13) thick with sausage, meatballs and bacon, not a single crust was crisp or brown enough. There may be those who enjoy pizza crust with as much texture as Wonder Bread, but I'm not one of them.

Where the pizza dough improbably redeems itself is on grinders (or submarines, hoagies or heroes, depending on where you're from). Rather than sub rolls, PBR uses freshly baked dough that is then grilled, effectively taking the par-baked crust and exposing it to the heat it requires to become an asset to the sandwich. Both the hot Italian grinder ($11), which layers soprassata, prosciutto, spicy coppa and pepperoni, and the classic meatball grinder ($10) benefit from the grilled pizza dough crust. As a bonus, the crispy, house-cooked kettle chips riding shotgun are a stellar complement.

Still cruising the vegetable popularity train, Brussels sprouts ($8) get the crispy treatment before being sprinkled with house seasoning and drizzled in honey. Our batch was cooked a bit too long, resulting in more char than crispiness, but that may be a matter of taste.

Although nearly everything on the menu seems geared to absorb alcohol, an exception is the vegan quinoa bowl ($10) studded with spinach, heirloom tomatoes, cremini mushrooms and fried Brussels sprout leaves, an appealingly light alternative in a sea of hangover helpers.

Served after 11 p.m. on Thursdays through Saturdays is the late night menu, which is limited to a few pizzas and wings. Go for the oven-roasted Asian wings (6/$8, 12/$14) then or any time because the fat little drumettes are flavorful, juicy and perfectly cooked.

PBR comes to Richmond courtesy of Eat Restaurant Partners, the can't-stop-won't-stop team that has already populated the metro area with eateries such as Foo Dog, Fat Dragon and Wong Gonzalez. Here, the group aims to attract the same crowd, albeit without the usual Asian influence. And by providing built-in games, a spacious patio and a parking lot for the parallel parking-averse, they've already succeeded.

Everyone may not be from the neighborhood, but people sure seem to like what PBR is offering. S