We may not be in New York, but you’ll be hard-pressed to find a better base for your lox. 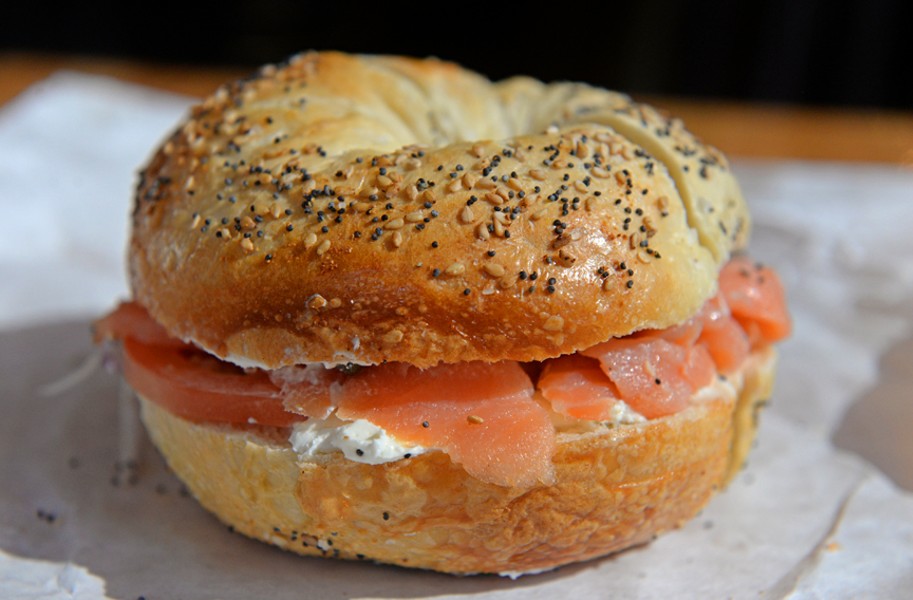 Scott Elmquist Lox with the works on an everything bagel at Nate’s features brined salmon, capers, tomato, red onion and cream cheese.

I've never lived in New York, but I worked there enough to get to know the territory. For years I trudged up for bimonthly editorial meetings in Midtown, plus the occasional visit with my agent. And every single morning I sought the perfect version of my favorite breakfast: a bagel with lox.

Here's the thing about bagel and lox — it's mostly about the bagel. Yes, you need the right balance of cream cheese, meltingly soft cured salmon, raw red onions — sliced, not chopped — and juicy tomato. But the bagel makes or breaks it. Too hard and the sandwich innards squish out when you bite it. Too soft and it's just a bland roll. Russ and Daughters in New York may win on lox, and indeed nobody's is finer, but none of my travel breakfasts have offered a better bagel than Nate's here in Richmond.

Nate's Bagels are the perfect balance of chewy, water-boiled-then-baked crust wrapped around an interior that's neither spongy nor tough. The crust is substantial enough to give your teeth good resistance as you break through, but not so hard that you have to gnaw at it. Inside is magically both soft and firm at the same time. One longtime New Yorker friend rates the interior as a bit fluffier than he prefers, but I'm chalking that nuance up to personal taste.

Most of Nate's varieties, which include cinnamon raisin, pumpernickel, sesame, onion and rosemary sea salt, have a full-on distinctive flavor and texture throughout the bagel, not just a cursory sprinkle of surface decorations and inside coloring. The everything bagel, plain or whole wheat, is covered in a crunchy blend of poppy seeds, sesame seeds, garlic and big chunks of sea salt that wake up your mouth. That's my choice for a classic lox breakfast. Swapping the lox for flakes of smoked trout or traditional whitefish spread will also do you right.

The meat-free, dairy-free version of bagel and lox features house-made cashew cream cheese and cured carrot strips — my vegan daughter immediately adopted it as her own go-to breakfast.

Nate is a native New Englander who has lived in Richmond for 11 years. He says he was influenced more by New Jersey than New York bagel shops, and it shows. My husband (exit 13) was delighted to see a sandwich called the New Jersey Turnpike on the menu. Along with a somewhat mysterious nonham pork product called Taylor ham, it comes with a fried egg, American cheese and SPK (salt, pepper and ketchup). Thumbs up from both my husband and my Jersey-bred pal, Jason (exit 11).

Lunch at Nate's is also a win, and not just because your bagel sandwich stays intact as you chew through it. The banh mi is rich with house-made pork belly, sparked by tangy carrots and daikon pickled in house, with plenty of bright, lemony cilantro. The Reuben, piled with either pastrami or turkey with local sauerkraut, has a similar sweet-sour-tangy balance.

Nate's has a cozy deli feel, with an awkward line-formation setup: turn left as you enter to get in the proper line, and put your menu back on the stand by the door. Bagel makers shout out order pickup numbers. A bakery case displays the Jewish pastry rugelach, vegan muffins, black and white cookies and challah. Cream cheese is available by the tub in flavors like scallion and pumpkin, plus the vegan variety and house-made hummus. The tables are small, but the counter is ample, with a view of bagel prep on the cold line and a peek into the kitchen. The day's bagels fill a row of wire baskets behind the register — easy to scan and choose as you stand in line.

And there are frequent lines, especially on weekend mornings. Usually they move quickly: I was in and out in 10 minutes on a recent Sunday. Nate's also offers pre-ordering via phone or online. I do wish some of the bagel-makers were a little less mindful about carefully folding the wrap, then placing the bagels in paper bags. A bit of New York rush-hour attitude could pay off here.

Smaller gripe, but in a long, narrow space like Nate's, it is awkward to have the sole indoor trash can far in the back. Diners must fight past the counter, even worse when there's a line, to throw away their trash before leaving.

Nate's seems to have sorted out a few early challenges with supply and demand. For a while, guests were limited to one or two bagels each. Now the shop only rarely closes early due to selling out. There seem to be bagels aplenty, and those in the know can even get a traditional baker's dozen.

I've taken my baker's dozen to breakfast meetings in Richmond, where attendees oohed and aahed over the taste and texture of a real bagel. Nate plans to roll out breakfast and lunch catering options soon. These days I work more often in Richmond and Washington than in New York, and fortunately I live close enough to stop entirely too often at Nate's for breakfast. You can guess what I order. S