REVIEW: VMFA’s Rodin Exhibition is One of the Museum’s Crowning Achievements

The Virginia Museum of Fine Arts Made in France, “The Minotaur” was modeled in 1885 and cast the following year. Inscribed on the base near the faun’s left foot: “à Maître/Md Goncourt./ A Rodin.”

Wake up grandma. Summon the neighbors!

If you don’t do another thing over the holidays make a beeline to the Boulevard for “Rodin: Evolution of a Genius.”

The Virginia Museum of Fine Arts has been tremendously successful in recent seasons with accessible exhibitions, but this collaborative effort with the Montreal Museum of Fine Arts and Paris’ Musée du Rodin — and through its own breathtakingly masterful installation, raises the bar for museum-going experiences to a thrilling height. And while this exhaustive exhibition, because of Rodin’s fame, could have been a cliché to the point of being blasé, in this installation the robust works are shown with thought, taste and dramatic effect that is worthy of the extraordinary works.

To fully appreciate pieces by a member of the artistic pantheon like Auguste Rodin (1840-1917), one requires little biographical information. But certain facts are intriguing. He was repeatedly denied admission into the academic École des Beaux Arts and therefore made his own way, brilliantly combining his own discoveries from his trip to Italy to see the work of Renaissance masters such as Michelangelo with his own impassioned approach to realistic sculpture. Also, he was a creature of his times, fully appreciating the whims of the market, especially in late 19th- and early 20th-century Paris when things were hopping and popping. He became a cultural celebrity, grasping early on, for better and worse, how the mass media was shaping opinions both aesthetic and political. Included in the exhibit are dozens of still photographs, of his own hand, and motion picture clips showing his mature, handsome visage ambling through his studio, stopping now and again to chip away at a work-in-progress. All the while he is highly aware of the camera.

With the exhibition title itself, “Evolution of a Genius,” the museum sets itself a challenge. Genius? Why lead the witness? Can’t patrons make up their own minds?

But the museum rightfully assumes that Rodin’s place in the canon is secure and everyone shares the same page: Dazzle us.

The curators and designers aren’t shy. From the moment visitors step into the first of six major gallery spaces they’ll forget wherever their heads were when they crossed the threshold. In a dimly lit, tunnellike space — reminiscent of how the VMFA once displayed its Fabergé collection — and amid deep gray walls, pin lights focus on a number of intimate sculptures with an emphasis on “the hand.” This was Rodin’s basic tool as well as signature of his approach.

The eye is also drawn to the far end of the gallery where a beautifully lit, silver photo mural depicts “The Gates of Hell,” a work commissioned in 1889 but never realized. “The gates” became a kind of palette from which Rodin would continue to draw.

With the mood set, visitors enter a second, starkly contrasting space with the theme Assemblage. Three bulbous hanging lights simulate skylights and exquisitely-crafted wooden work tables support myriad plaster models showing the progression of the sculptural process. Most exude an eeriness similar to plaster casts of humans caught in that agonizing moment when Vesuvius erupted and froze its Pompeian victims in the moment of death. At the end of this gallery smaller works are under glass vitrines as if part of a laboratory experiment.

The third area is devoted to Rodin’s models. Special emphasis is given his controversial depiction of Honoré Balzac (1799-1850), the great French writer. The monumental figure was equal parts heroic and human, triumphant and frail. Apparently, public reaction was equally divided.

And then, entering a fourth gallery, boom! 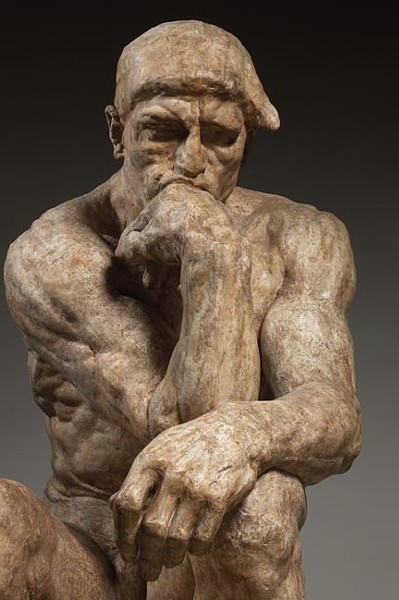 A large, dimly lit gallery delivers the what-we-came-for moment. Casts include Rodin’s most iconic pieces, “The Walking Man,” “The Prodigal Son,” and a surprisingly modern tribute to Whistler’s mother. These are theatrically set on gradually ascending pedestals that culminate in an oversized version of the artist’s most famous work “The Thinker.”

So what does the exhibition offer for an encore? Wisely, it lowers the decibel level. The next gallery is subdued with archival black and white photography—still and motion pictures— that offer glimpses into Rodin’s studio and galleries in way earlier European sculptors could not have been shown.

Moving on, visitors are offered a secondary crescendo, a gallery with full, heroic, life-size works that include “The Age of Bronze” and “The Burghers of Calais.” Magnificent.

My bet is that all will leave exhilarated. “Rodin, Evolution of a Genius,” is museum scholarship and finesse at its finest. Given master works, the collaborating institutions determined a new theme, “evolution,” and the VMFA— through lighting, spacing and pacing— engages the viewer. It is all very smart.

“Rodin” is also a reminder, when Paris and much of the world is saddened and rattled by the recent terrorist acts, and the Middle East witnesses the destruction of ancient landmarks, that it is artists — poets, writers, composers, filmmakers and sculptors — to whom we often turn for clarity.

So it is Rodin who has the last word here, despite the brilliant exhibition. His works speak across generations and cultures because they aren’t slick portraits set upon pedestals. Every human torment, grimace and contortion is something to which we can all relate in personal, communal and contemporary ways. S

The exhibit “Rodin: Evolution of a Genius” continues at the Virginia Museum of Fine Arts through March 13. Admission varies. For information, call 804-340-1400.