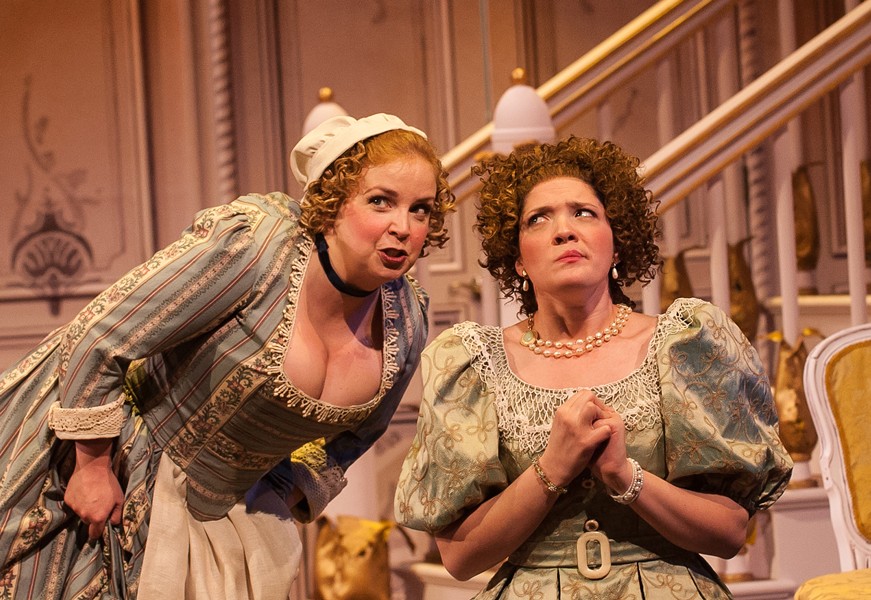 Seventeenth century French playwright Moliere (the stage name for Jean-Baptiste Poquelin) may have been a genius but, as exemplified by Virginia Repertory Theatre’s production of “Tartuffe,” he would have benefitted from the advice given to beginning writers of today, that is, “show, don’t tell.”

Granted, the difficulties in staging a 350-year old play, particularly one written in rhyming couplets, run a wide gamut and director Bruce Miller ably avoids many of them. Still, a scourge of talkiness hampers the beginning of “Tartuffe” and the finale falls flat because it depends on off-stage, unseen action. It’s a credit to Miller and his crew that, in between those somewhat stale pieces of theatrical bread, they are able to create a rich sandwich of scenes filled with wit, style and flashes of brilliance. But, given the sumptuousness of this production, one leaves wishing for a more consistently fulfilling treat.

The title character (played by Ryan Bechard)doesn’t show up on stage until deep into the first act. Most of the dialogue before then is spent pillorying Tartuffe as a profound hypocrite who nobody trusts but Orgon (Joseph Pabst), a rich nobleman. As hard as Bechard works to make his character despicable, the actions we see don’t raise much above your garden variety lechery.Tartuffe appears less evil than Orgon seems obtuse. By the time the nobleman’s wife, Elmire (Eva DeVirgilis) has exposed Tartuffe – in more ways than one – Orgon has signed away his wealth to the hypocrite and seems destined to be thrown out of his own house.

These shenanigans are amusing enough but there is more mirth to be found in the subplots involving Orgon’s children, particularly Alexander Sapp’s turn as Orgon’s son, Damis. His flamboyant confrontation with Tartuffe infuses the proceedings with much-needed energy.This scene is followed by a farcical interlude involving Orgon’s daughter Mariane (Amaree Cluff) and her fiancé Valere (Brad Fraizer), who is in danger of being replaced by Tartuffe. Cluff and Fraizer share a delightful over-the-top comic chemistry and their antics are refereed by a saucy lady’s maid (Debra Wagoner)who improves every scene where she appears.

Costume designer Sue Griffin has outdone herself here, with the wealth of post-Renaissance France apparent in the production’s many lavish frocks and elaborate wigs.Brian Barker has also fabricated an elegant European style with his set design, complete with so many doors to slam that it’s a shame the show’s not a farce.

What exactly “Tartuffe” is poses a problem that Miller doesn’t totally solve. The “Cat in the Hat” rhyme scheme of the dialogue lends itself to the more silly comedy bits but most of the actors do an admirable job of making the meter of Richard Wilbur’s literate translation sound natural. A clever coda highlighting modern-day hypocrisy would have more power if a straighter line between Tartuffe’s actions and scoundrels of today could have been drawn. And these days when duplicity among politicians runs rampant, Moliere’s granting of amazing prescience to the French king seems most anachronistic.

Many entertaining performances and handsome stagecraft elevate “Tartuffe” but its inherent challenges keep it stubbornly earthbound.

“Tartuffe” runs through March 9th at the November Theatre, 114 West Broad Street. Go to va-rep.org or call 282-2620 for tickets and information.