“Mame” serves up a light, crowd-pleasing feast with choreography that wows. 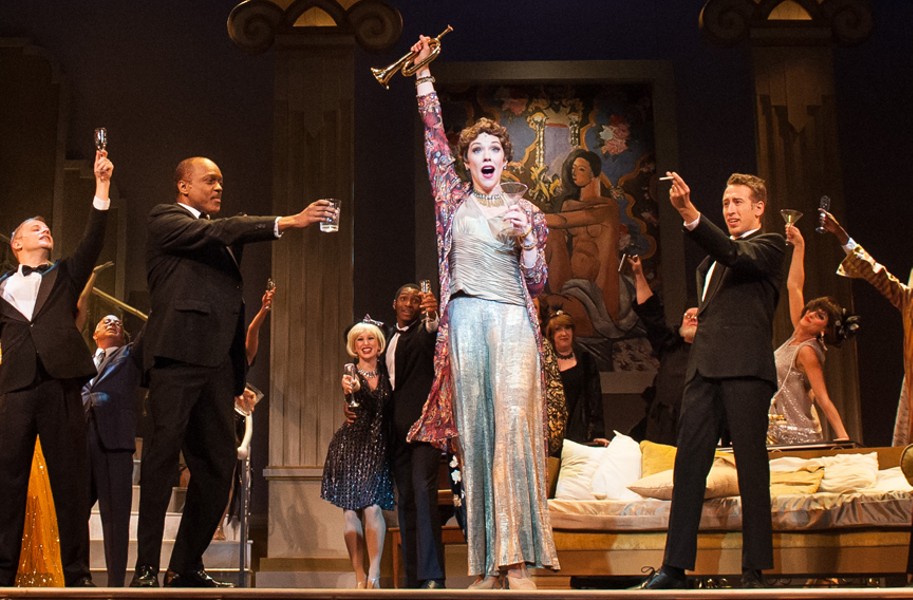 From the moment Tony-nominee Emily Skinner takes the stage as the titular character in “Mame,” you can tell a big, splashy Broadway musical is about to be served -- and Virginia Repertory Theatre doesn’t disappoint.

Against the backdrop of Ron Keller’s gorgeously executed art deco set, perfectly complemented by Lynne M. Hartman’s lighting design, we learn the plight of Young Patrick, a 10-year-old who’s come to live with his eccentric and free-spirited Aunt Mame in New York. Arriving at Mame’s Beekman Place apartment, Patrick and his longtime nanny, Agnes, find Mame throwing a wild, boozy party in the middle of Prohibition.

Where many orphan tales would have adults eventually eschew their carefree lifestyles to become sober parents, “Mame” goes the opposite direction, exposing Patrick to artists and having him attend a bohemian school in the buff. Things are going well until the stock market crashes and Mame and crew must figure out how to survive.

As Mame, Skinner exudes charm and talent while she belts out song after song. Dressed by Sue Griffin in sequins and pearls, Skinner’s stylish performance brings a bit of Broadway to Richmond, and throughout her character’s trials -- and one very humorous fox hunt -- Skinner always seems to be sharing a wink with the audience.

Playing Mame’s best friend and the “world’s biggest lush,” Broadway actress Vera Charles, is Desirée Roots Centeio. She does admirable work too, and their duet, “Bosom Buddies,” is a highlight. Audra Honaker displays her comedic chops as Agnes, the dowdy nanny turned hot young thing, and her “Gooch’s Song” is the show’s funniest number. Brandon McKinney is undeniably cute as Patrick, played as an adult in later scenes by Alexander Sapp.

Luckily for Mame, a gentleman with the impossibly Southern name of Beauregard Jackson Pickett Burnside (a charming Jody Ashworth) swoops in to rescue her from a life of destitution, though first she must face his family and an attempt to undermine her by the scheming Sally Cato (a hilarious Nicole Oberleitner).

Nearly as central a character as Mame or Patrick in this production is director Patti D’Beck’s choreography, which wows in big production numbers throughout. From the Charleston-influenced “It’s Today,” through the tangoing dance break of “Open a New Window,” to the raucous “That’s How Young I Feel,” D’Beck shows why she’s one of the best choreographers in the city. In addition to their stunning footwork, the ensemble sings sweetly under John Winn’s musical direction, though the eight-piece band sounds bare-bones at times.

It takes a few scenes to fully engage and can be sentimental at times, but Virginia Rep’s “Mame” is unquestionably a light, crowd-pleasing feast, arriving just in time for the holidays. So gorge yourselves, for as Mame says, “Life is a banquet, and most poor sons of bitches are starving to death.”