Poignant production explores how family lessons remain with us. 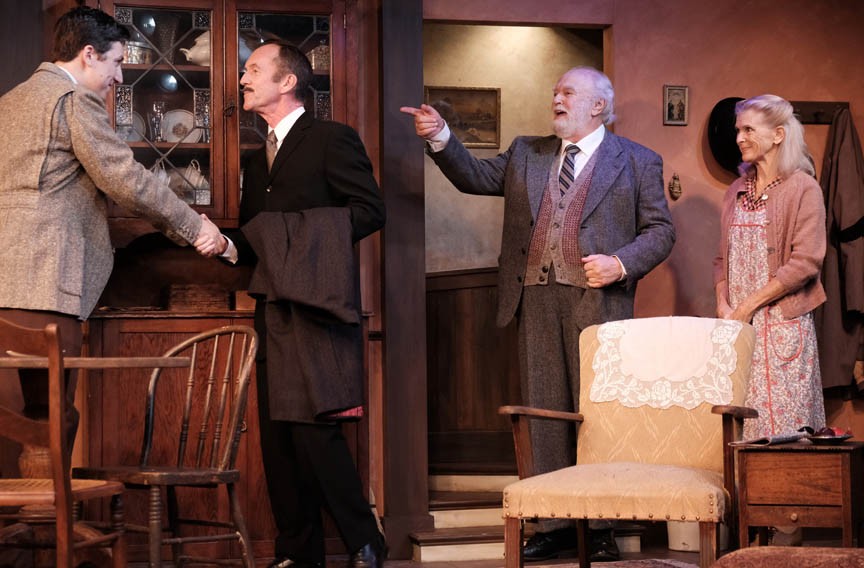 Of all Europe’s countries, Ireland may have the most surprising hold on American culture. From a professional basketball team, the Boston Celtics, and Irish pubs to a popular, if misguided, drunken celebration on March 17, a good many people claim connection to this island in the North Atlantic.

It’s here that playwright Hugh Leonard sets “Da,” a play that looks back at his upbringing in Ireland. Playing like an Irish cross between “The Glass Menagerie” and “Brighton Beach Memoirs,” the show explores how the lessons and history of family can stay with you even if you wish they wouldn’t.

As the play opens, protagonist Charlie Tynan (Landon Nagel) has just returned to his childhood home following his father’s funeral. Still wearing a black armband of mourning, Charlie begins to reflect on his youth, entertaining visitors both real and imagined. Directed with a subtle hand by Steve Perigard, Virginia Repertory Theatre has crafted a poignant production of this 1978 Drama Desk and Tony Award winner.

Looking back on Charlie’s past, younger versions of his parents and himself appear, playing through important parts of his life as Nagel narrates and talks to the characters. It’s in scenes like this that we learn that Charlie is an illegitimate child who was taken in by foster parents. Playing the middle-aged and teenage versions of Charlie, Nagel and Trevor Craft deftly convey a mixture of admiration, astonishment and shame for his parents, as well as the stigma attached to being an illegitimate child in midcentury Catholic Ireland.

With artificially grayed temples, Nagel is engaging even in moments where his character is harshly and unfairly critical of his parents. Casting actors to plausibly play different ages of the same character isn’t the easiest task in Richmond, but Nagel and Craft bear a striking resemblance to each other.

In the title role — Charlie’s Da — Alan Sader is a jovial, impish father who’s so charming you nearly don’t mind when he declares that he’s rooting for the Nazis to win World War II. Mischievous but unambitious, Da spins a lot of working-class wisdom and nonsense — fun to hear — but not exactly sage advice. As Charlie’s mother, Kelly Kennedy gives a well-rounded performance in a role that could easily have been a wooden version of an overbearing maternal figure. Playing Drumm, Charlie’s cynical mentor who wishes manners would revert to the Victorian era, John Moon is appropriately stuffy and looks the part. As Charlie’s childhood friend Oliver, Ford Flanagan makes his character leap from an enthusiastic teenager to a disappointed middle-aged man.

Though the acting is uniformly good, the accents are of variable quality, with Craft and Nagel offering the best on stage. Terrie Powers’ set works well for Charlie’s modest childhood home, but the outdoor scenes look more like a terraced miniature golf green than the rolling hills of Ireland.

Given the territory covered by the play, it would be easy to slip into melodramatics, but with Leonard’s smartly constructed script and Perigard’s direction, the show avoids mawkishness, and strikes a funny and slightly sad tone.

For Charlie, it’s clear that he wants greater things for himself — no more telling than a scene where Da is given a meager pension for his decades of hard work in a garden. Da is pleased but Charlie feels insulted, arguing that his father is owed more. Even harder for Charlie is making peace with the sacrifices his parents made for him, even at the end of Da’s life.

Expertly fashioned and more bittersweet than a Beamish stout, “Da” will stick with you like the ghosts of Charlie’s past.

Editor's note: This review has been updated to correct the actor's name who played the younger Charlie.