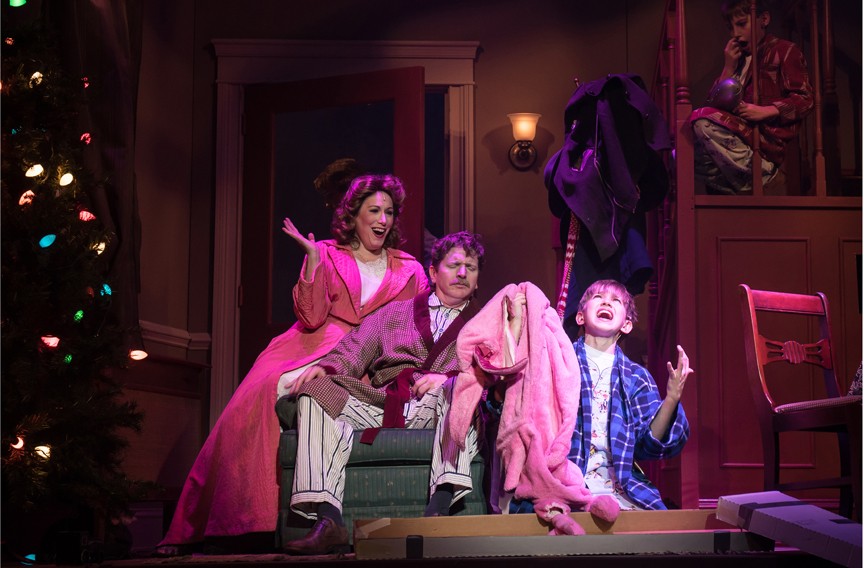 Bringing Hollywood films to the musical theater stage has been a bit of a Broadway trend for the past decade or so. Such musicals as “Hairspray,” “Legally Blonde” and even “Grey Gardens,” have taken characters and stories that audiences know and refashioned them into new material: song and dance. “A Christmas Story: the Musical,” follows in that tradition, and Virginia Repertory Theatre offers a delightful production of this holiday classic.

But don’t go in expecting to see the film you recall from your childhood -- or replayed on television annually during the holidays -- with a song thrown in here and there. This is a musical-lover’s musical and, as such, the tone is quite different from the film: It’s less cynical.

The film was about the dark humor and nostalgia in witnessing Ralphie’s constant childhood disappointment and humiliation. But, like most musicals, this production puts the emphasis on showmanship and spectacle, elements that have nothing to do with the unfolding of the plot. In a musical version of a beloved Christmas classic, that’s acceptable. The result is a highly entertaining production with plenty of wow factor.

The spectacle element is achieved immediately with Brian C. Barker’s retro set design, featuring a house with a detachable wall so you can see it from inside and out, stylized backdrops and occasional fake snow flurries. Joe Doran’s lighting is an important part of the humor, with pointed spotlights and bright colors underscoring the play’s funnier moments.

Nicole Oberleitner’s choreography -- and the many talented ensemble players who perform it -- absolutely take the show. Some of my favorite dance numbers include “Ralphie to the Rescue!” with burlesque-style humor and some impressive tap-dancing, and “A Major Award,” which features my favorite of Jeanne Nugent’s costumes: a chorus line of women in fishnets and lampshade dresses! These are big, crowd-pleasing performances. And although a couple of slight wardrobe malfunctions (tap shoes and a lampshade finial hat falling off middance) sometimes threaten to derail a scene, the actors’ recoveries are smart and professional.

I could’ve watched Duke Lafoon’s old man character dance and sing all night long, but it’s the young performers who shine brightest. Brandon McKinney, who plays Ralphie, carries the show. His vocal abilities are remarkable. During the “Ralphie to the Rescue” numbers, his crystal clear notes stand out among a chorus of adult ensemble players.

Chase Kniffen’s greatest strength as a director may be his ability to empower these young actors to not only take center stage, but also own it.

The one serious problem I have is more an issue with the adaptation itself and not this production, but it bears mentioning. For a play that manages to strike the right balance of bawdy adult humor while remaining family-friendly, it’s disappointing that the final scene of the show relies on tired and outdated

Chinese-American stereotypes for humor. Yes, this was in the original film, but so was the Little Orphan Annie decoder pin, and that was cut, presumably for time. This adaptation made its Broadway debut in 2012, so I’m perplexed about why this particular joke couldn’t have been omitted or modified.

All in all, this is good, satisfying, feel-good musical theater. Go see it. Take your family visiting from out of town for the holidays. I did, and it was a big hit.