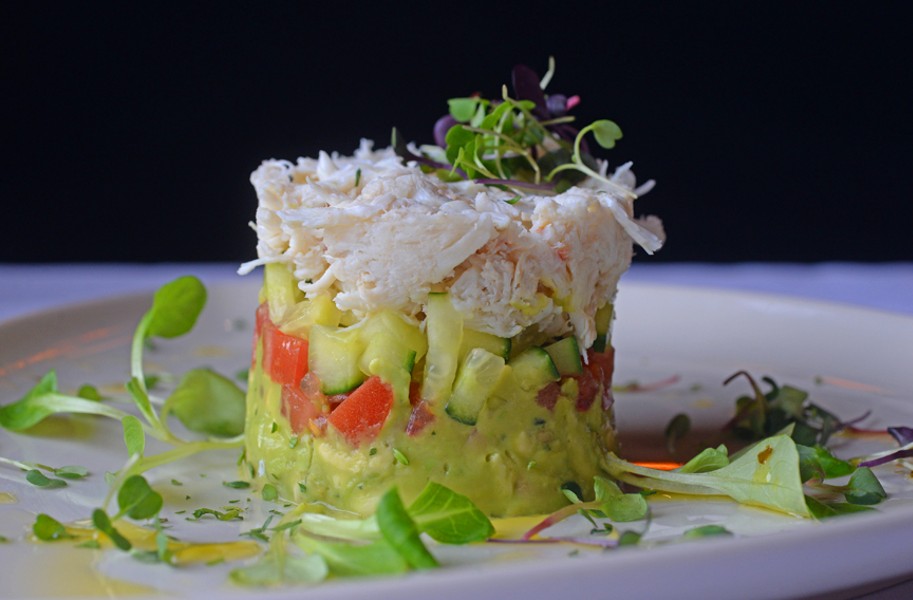 Scott Elmquist The crab stack small plate at the Tobacco Company features lump crabmeat on a base of mashed avocado, cucumber and tomato.

Flash back to July 1977. The Presidential Medal of Freedom was awarded posthumously to the Rev. Martin Luther King Jr. and Sweden's Bjorn Borg beat Jimmy Connors at Wimbledon. John Lennon got his green card for permanent U.S. residency.

Closer to home, the Tobacco Company opened its doors for business. Almost immediately, the renovated tobacco warehouse cemented its reputation as the go-to place — the antique elevator, the chandelier — for Richmonders to celebrate life events and for hotel guests looking for a nice meal.

When I moved here in 1986, the Tobacco Company was at the top of the Richmond restaurant pyramid.

Though it never seemed to adapt to a changing restaurant landscape, it held firm as a business and occasion-worthy place, at least until a kitchen fire in July 2017 shut things down for 17 months. Despite fire damage to the dining rooms being minimal, smoke and water damage was extensive. The owners took the opportunity to refresh and renovate, and the overhaul includes an all-new first floor art deco lounge.

Still, old perceptions die hard and upon opening the menu, my companion's initial reaction was familiarity. "What, it's still the '80s?" she asked, scanning a menu starring shrimp cocktail, six steak offerings and lobster. But, wait, a closer inspection reveals nods to more modern taste. Surely cauliflower steak or roasted Brussels sprouts with balsamic walnut butter don't date back to the Reagan years.

So we dive in and the meal launches with a winner. Although our server didn't talk up the she-crab soup ($7/$9), I had a distant memory of it being a house specialty. Tasting deeply of seafood initially, then of dry sherry and finishing on the richness of cream, the soup is most aptly described as wicked good.

Should you want to ratchet up your salad course, the wedge ($10) pairs the usual suspects — iceberg lettuce, tomato, Gorgonzola — with bacon onion jam instead of the standard bacon bits and throws in spiced pecans for good measure. The jam adds a compelling complexity to the assemblage and stands up to the cheese for dominance.

Although technically a small plate, the crab stack ($17) manages to be both generous and decidedly light — handsome, too. The tower's base is mashed avocado topped with chopped tomato, cucumber and mâche lettuce, with an impressive mound of crab sitting on top and cilantro lemon oil tying everything together. Simple with fresh flavors, it's a dish I could eat anytime I'm in the neighborhood.

Set off in an asymmetrical white bowl is roasted rockfish, crisp with the skin on, over bacon succotash ($33), the latter sounding like a terrible idea this time of year and being anything but. The savory mélange corrals tomatoes and onions with the requisite lima beans and corn, two stalwarts of summer, but tasting is believing. Every component of the succotash tasted fresh and distinctly flavorful while delivering enough toothsome texture to purge memories of mushy or overcooked variations.

Prime rib ($32) has been a staple on the menu since the empire first struck back. After ordering ours medium rare, it arrived with a noticeably unpink complexion, which we mentioned to our server. Without hesitation, she offered to exchange it for another piece, returning with a larger, and more important, rosier hunk of meat that dwarfed its baked potato date.

Fans of prime rib crave it for the large eye of meat in the middle because it's tender, juicy and marbled with fat, so it's wildly flavorful. Although the Flintstonian slab was tasty, it didn't have nearly the marbling one hopes for when committing to prime rib.

Along with she-crab soup and prime rib, the third leg of the Tobacco Company's reputation-building stool is the signature butter cake for two ($12). Served warm, the miniature Bundt cake scores with its butteriness, moistness and the decadent cream cheese center, making the accompanying vanilla bean ice cream and chocolate sauce almost superfluous. Almost.

Another thing that hasn't changed is staff attire. Bartenders still wear vests over rolled up sleeves and female servers maintain a long tradition of figure-flattering black dresses. Those we dealt with displayed professionalism and attention to customer satisfaction, if not always sounding particularly food-savvy.

Old as it is, Tobacco Company seems to have emerged from the ashes like a phoenix, as much a crowd-pleaser as ever, assuming you have the scratch to afford as much as $47 for an entree.

While enjoying my second meal, surrounded by tables of businesspeople, my companion confessed she'd had her Sweet 16 birthday dinner there. Moments later, as if on cue, diners at a large table nearby began singing "Happy Birthday."

Fact: As long as there are hotels recommending restaurants and Richmonders celebrating special days, there will always be an audience for Tobacco Company.