Theater Review: "To Kill A Mockingbird" 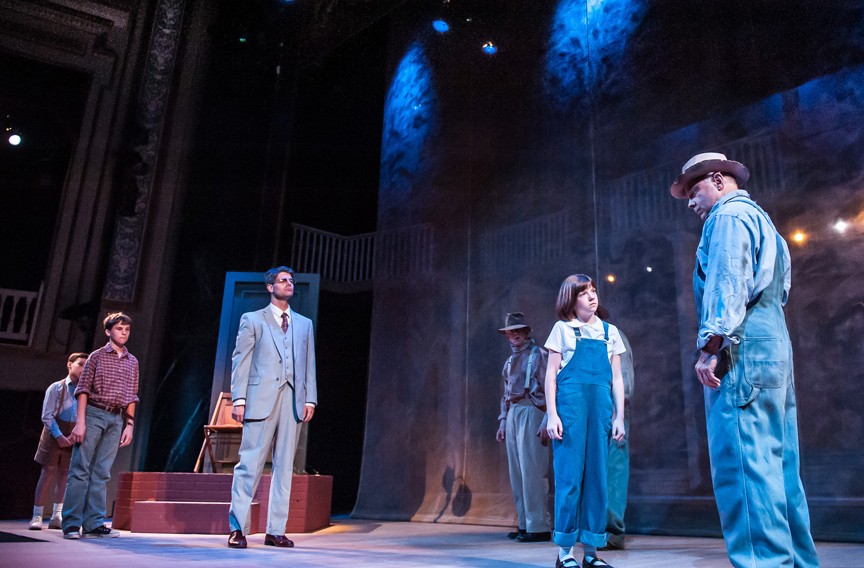 With source material as powerful as Harper Lee’s “To Kill a Mockingbird,” there was little question that the staging of the story by Virginia Repertory Theatre would hammer its message home. The novel describes incidents during a tension-filled summer in a small Louisiana town that manage to be both convincingly universal and heartbreakingly specific in their indictment of racism. The stage adaptation by Christopher Sergel captures all of Lee’s narrative flourishes, lifting large slices of text directly from the book.

So the real question is: What can director Rusty Wilson do to make this material appeal to a theoretically post-racist generation? While a couple of his choices diffuse the play’s dramatic power, he also uses some inspired strategies to infuse new energy into the familiar story.

Wilson goes a long way toward rectifying this imbalance by employing a choir of black characters that inject interludes of song during transitions in the story. Their presence acts as a constant reminder of the stakes involved; while the Finches are busy learning important lessons, black families are being devastated.

When the story moves into the courtroom, Wilson stages the action so that characters address the audience as the jury, making the proceedings more immediate and intimate. Prosecuting attorney Mr. Gilmer (Ford Flanagan) makes particularly good use of this device as he argues on behalf of alleged victim, Mayella Ewell (Suzanne Grey). The trial’s conclusion is never in question, but Wilson effectively reinforces the impact of the result.

The other main narrative -- the children’s fascination with mysterious neighbor, Boo Radley (Dean Knight) -- comes across a bit less forcefully. The choice not to mic any of the actors results in some dialogue getting lost. That, plus the tendency of the young actors to rush their lines, ends up undermining some of their scenes. Still, Nugent makes a plucky and winning Scout, and her ultimate resolution with Boo still resonates.

Other acting standouts include Rieder, whose Atticus has the calm dignity of Gregory Peck, though his stern rectitude could be tempered with more warmth. As empathetic neighbor Ms. Maudie, Laine Satterfield provides insight, context and story narration. Mollie Ort makes a memorable impression as a crotchety old lady, and Grey is believable as the defiant and confused Mayella. The action plays out on an impressive set designed by Ron Keller that effectively evokes a small neighborhood. And the 1930s-era costumes by Elizabeth Weiss Hopper are spot-on.

The flagrant racism depicted in “Mockingbird” may have been pushed to the corners of society, but the power of retelling this story endures.