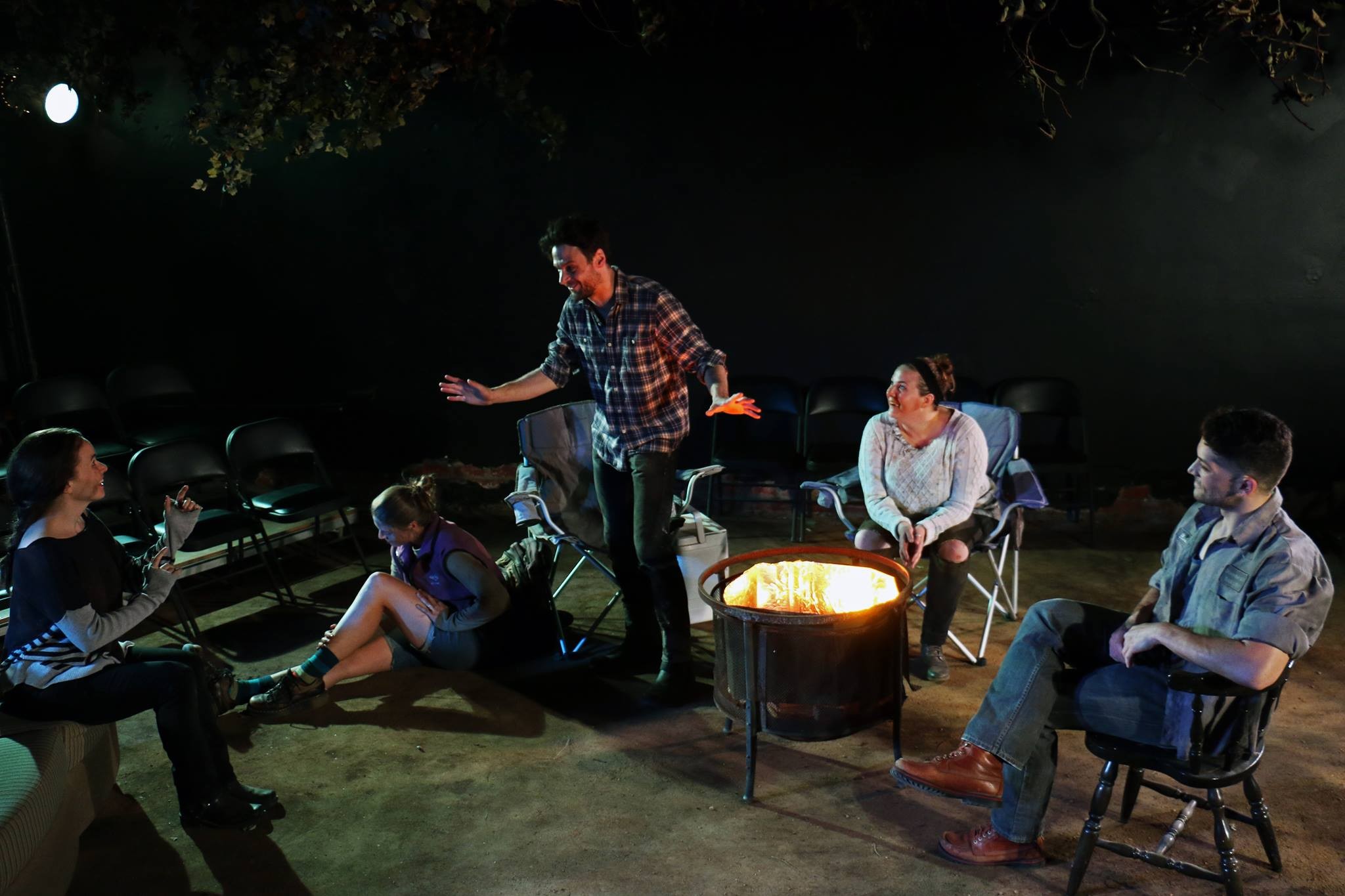 There’s nothing like an election year to bring up thoughts of the apocalypse, but in TheatreLab’s “Mr. Burns: a Post-Electric Play,” the end of the world as we know it already has come and gone.

Written by Anne Washburn and starring a familiar crew of young Richmond actors, this dark comedy muses on weightier themes than its premise might indicate.

The show opens in the midst of a group of survivors huddled around a campfire. Through an unmentioned turn of events, the world has gone dark, and questions are raised about who is minding the nuclear power plants nearby. The survivors carry guns and compare notes on who they’ve met in their travels since the power went out. Led by Matt (Evan Nasteff), they take solace in recalling a television show they all knew, “The Simpsons.”

Around the campfire, they try to fill the gaps in each other’s memories about a specific episode titled “Cape Feare,” a spoof of the 1991 remake of “Cape Fear” starring Robert De Niro. Just as De Niro’s character targets Nick Nolte and his family in the film, Sideshow Bob is on a quest to kill Bart Simpson.

The survivors delight in remembering lighter times of watching television, when entertainment was an easy click of the remote away. Though familiarity with the movie and “The Simpsons” episode isn’t essential to get the jokes, it is enhanced by it. The film “Cape Fear” is currently streaming on Netflix; the cartoon can be watched for free at simpsonsworld.com.

Fast-forward seven years and the same survivors have formed a theater company that specializes in recreating whole episodes of “The Simpsons.” It travels from town to town like the theater companies of yesteryear, providing entertainment with a heavy dose of nostalgia. Accuracy to the original episodes has become paramount, and the company is willing to pay top dollar to people for lines of dialogue they recall. Commercials are re-created to play into the television experience, but cracks form in their memories of electric times.

The show’s final act jumps ahead another 75 years, to the point when the Simpsons have attained God-like status. Bart has been elevated to the role of classic hero in the Joseph Campbell sense, and his overcoming of hardship has become representative of a people surviving without power. Through the generations-long game of telephone that is oral storytelling, Sideshow Bob has been replaced by Mr. Burns as the tale’s villain. Mr. Burns was the evil owner of Springfield’s nuclear power plant, remember? Other elements of the episode have morphed to fit what society now holds important. In the final act, the Simpsons and Mr. Burns wear masks similar to those in ancient Greek drama, though the third act also has transitioned to musical theater.

Smartly directed by TheatreLab’s Deejay Gray, the show nimbly jumps from Simpsons references to broader societal questions, all while creating laughs. Ashley Swiger’s evocative lighting and Michael Todd’s shifting set design aid in telling this apocalyptic tale, and the cast is packed with some of Richmond’s best young actors, including the ever-charming Evan Nasteff and Chandler Hubbard as the fretting character Gibson.

I’ve long awaited a show that would use all of Jessi Johnson’s talents onstage at once. The idea that she would accomplish this feat as Bart Simpson is the last thing I would’ve predicted. In the show’s final act, she’s funny, defiant and commands the stage with her voice. Also in the third act, Dan Cimo is deliciously wicked as Mr. Burns, reminiscent of his work as Cousin Kevin in Virginia Commonwealth University’s 2010 staging of “The Who’s Tommy.”

Though the third act could stand a little trimming, Washburn’s script is a marvel, taking you to an age without electricity to examine the value of entertainment, myth, and how they evolve over time. The play touches on high and low culture while remaining both brilliant and universally appealing.

With “Mr. Burns,” Gray and company have put a cherry on top of an incredible season that also brought “Lady Day at Emerson’s Bar and Grill,” “Bad Jews” and “Venus in Fur” to Richmond. If you’re in the market for intriguing, vibrant and engaging theater in this town, you know where to look.