REVIEW: The William Shatner Christmas Album “Shatner Claus” Is Just What You Might Expect 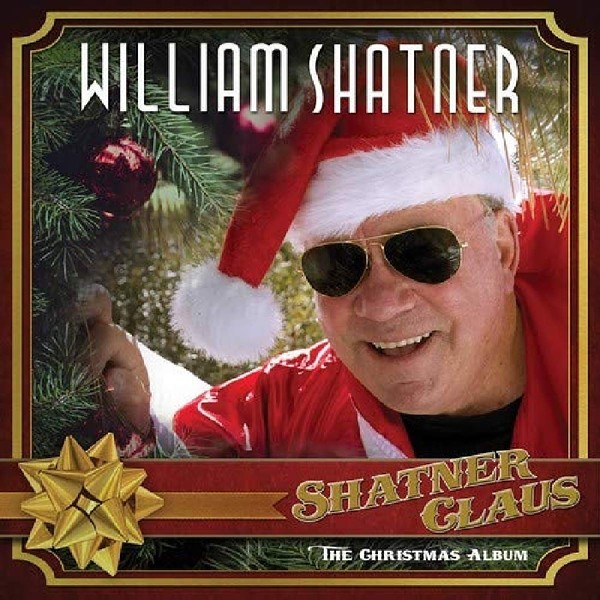 Gather ‘round the decorative cheeseball, girls and boys, is there an album this holiday season just waiting for you. Yes, the one and only William Shatner has released “Shatner Claus: The Christmas Album.” And we listened to it -- and even though we took a little nap half-way through, it's not half bad.

How could you not have some real highlights on an album that includes such a strange potpourri of guests including: Henry Rollins, Brad Paisley, Jethro Tull flutist Ian Anderson, Cars’ guitarist Elliot Easton, studio whiz Todd Rundgren and Artimus Pyle (from Skynyrd), ZZ Top’s Billy Gibbons, Rick Wakeman of Yes, folkie Judy Collins and a serious but still creepy “Silent Night” by Iggy Pop and the Shat man.

Fans of the actor’s past singing efforts, such as 2004’s “Has Been” produced by Ben Folds, or the classic “The Transformed Man” from 1968, know the deal. Shatner plays up his cheeseball reputation by typically speaking the lyrics in exaggerative thespian fashion, with oddly morphing inflections sometimes within the space of one sentence. Occasionally you get what can only be described as a Shat-tastic freak-out, like when he famously covered Dylan’s “Mr. Tamborine Man” and sounded like a raving lunatic. Perhaps the most beloved example of Shatner’s particular style of “am I tripping?” singing is his rendition of Elton John’s “Rocket Man” at a Sci-Fi convention. I won't repost it here but, hands down, it is one of the best time capsules of weird ‘70s Americana that exists.

Anyway, a quick rundown of some highlights from “Shatner Claus”: While it’s cool hearing the album kick off with punk rocker Henry Rollins barking the chorus to “Jingle Bells,” before leading into the second track, a swaggering honky tonk version of “Blue Christmas” with Brad Paisley really giving it his all – my Shatner antenna perked up on “Little Drummer Boy.” Featuring the ghostly blues guitar of Joe Louis Walker, the song’s slow climactic build of onomatopoeia “pa-rum-pum-pa-pum pum” is perfect Shatner territory. And listen how he makes “I play my drum for him” sound like a creepy come-on, probably unintentionally.

Another standout was the celebratory “Feliz Navidad” featuring Dani Bender (I don't know who this is, and a quick Google search wasn't much more revealing). Shatner just sounds so excited here that it’s hard not to get swept up in the festive song – at one point he’s laughing maniacally. This is a good example of how he’s constantly trying different voices and approaches in his head just to make reading the lines more interesting to himself.

And what about that “Silent Night” with Iggy Pop? It’s pretty straightforward and respectful, starting with Shatner delivering a serious, hushed tone lyrical reading, before Mr. Pop kicks in with a creepy, wavering chorus that makes him sound much older than Shatner’s 87 years. Then we’re back to Shatner talking about “radiant beams from thy holy face” conjuring his famous role as Captain Kirk from “Star Trek.” Don’t get me wrong: the song is not done in some religion-mocking way. You can tell everyone on this album is putting forth serious effort: It’s just that Shatner can’t help sounding like an overacting machine. He could be reading the phonebook and it would sound like an overly indulgent Shakespearean fop. It’s his schtick – instead of fighting it, he embraces it.

It's hard not to mention the grand weirdness of hearing Shatner begging “rejoice rejoice Emmanuel” just before a woozy, space-age synth solo by Rick Wakeman of Yes, kind of the perfect instrument for Shatner’s sci-fi persona. And the album closes by bringing Henry Rollins back for an even more punk rock take on the opening “Jingle Bells.”

Bottom line: There’s a little something for everyone here. The people who want serious Christmas music and those who just want to hear Shatner get freaky, baby. So go ahead and add Mr. Bill to the long list of Jewish entertainers who have made Christmas albums from Streisand and Diamond to Torme and Manilow. Except really – none of theirs could possibly be this cool or weird.

My only complaint is that the song selection wasn’t occasionally more adventurous. Like, would Shatner not be the perfect person to cover the classic 1962 single by Tony Rodelle Larson “Cool Yule?” I tried to tell him this last time he came to Richmond and I’m pretty sure he just repeated the comment back to me in Esperanto.