REVIEW: The sunny horror film “Midsommar” is a weird mixture of high-toned art and pulp 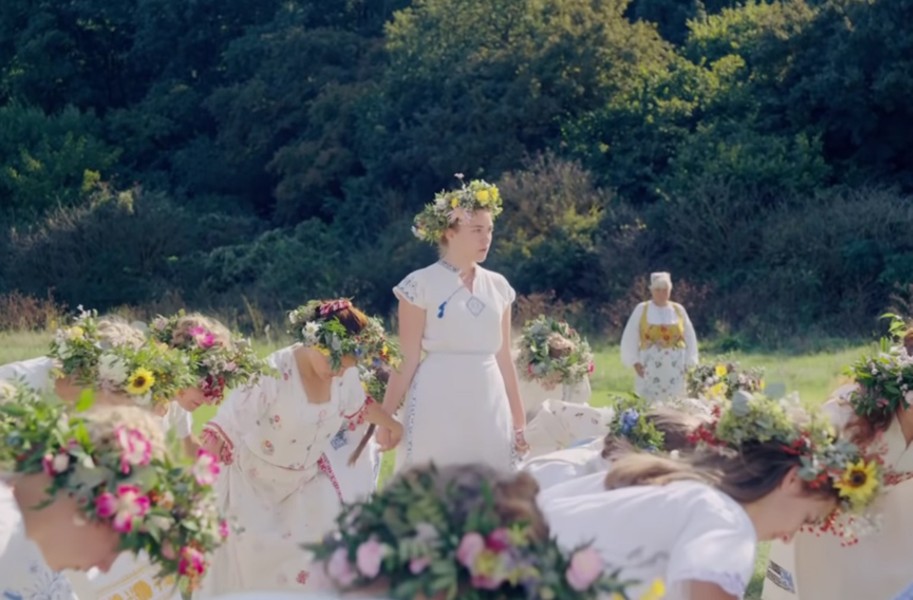 The film’s protagonist, Dani (Florence Pugh) walking through a derivative script that might have been called "The Wicker Hostel."

In “Midsommar,” writer and director Ari Aster takes a derivative horror script, which could’ve been called “The Wicker Hostel,” and pumps it up with enough technique for 10 movies. Aster attempts to work a kind of alchemy, fashioning a hallucinatory masterpiece out of spare parts. He comes closer than one could reasonably assume, though the inherent shallowness of the film’s construction eventually undermines him.

Which is to say that “Midsommar” is a weird mixture of high-toned art and pulp that oscillates between being the best and worst of all those possible worlds.

For all its superficial bravura, Aster’s prior film “Hereditary” was a lifeless experience —the atmosphere, though confidently sustained, felt as shopworn as the plot. The only thing that pepped the film up was the violence, which was staged with the lip-smacking relish of a gore hound with about a fifth of Aster’s pretension. By contrast, “Midsommar” has a legitimately startling setting: a Swedish paradise of endless sunlight, inhabited by kindly people in garland and white frocks who live in eerily symmetrical and asymmetrical cabins that are positioned in a semicircle. The community is so small that Aster can orient us to its geography with a single master shot, which is among the film’s subtlest and most chilling touches.

The darkness of “Hereditary” has been entirely removed from “Midsommar” then, with no shadows to rely upon for mood. Aesthetically, this conceit frees the director, who spends much of the film’s 140-minute running time luxuriating in the brightness of the sun, fashioning fancy Stanley Kubrick camera tricks while doubling down on the arcane rituals of the community.

We see a maypole dance with competitive allusions to “They Shoot Horses, Don’t They?” We see elaborate meals in which the community sits at long tables shaped like crossing triangles, another visual effect that’s unnerving for subliminal and almost inexplicable reasons, as it seems to physicalize the aggressive truth of this cult. We see people strolling the countryside playing flutes. And we see characters taking copious amounts of hallucinogens, which, along with telling illustrations dotting the buildings, become running jokes as well as harbingers of worse things to come.

After a grueling prologue, in which the film’s protagonist, Dani (Florence Pugh), suffers a great tragedy, Aster takes his sweet time fulfilling the violent mandates of the horror genre, and the wandering druggy aura has a kick up until the letting of first blood. The community is performing yet another ritual, with an elderly couple ascending a cliff, which Aster shoots from below the mountain so that the couple’s faces appear to be one with the clouds, their presumable notion of heaven. These extraordinary images are complemented by Haxan Cloak’s booming Wagner-ish score, and just as we’re zoning out, grooving on the trippy quality of the enterprise, Aster springs a volcanic shock.

The sun, the score, the camera pirouettes, the medieval details and Pugh’s wrenching performance all give “Midsommar” the air of a work of rarefied horror poetry — and these qualities should not be taken for granted. But the film climaxes at the cliff, and its long passages of atmospheric noodling come to feel like a way for a clever director to paper over formula. Dani has arrived at this place with the usual clueless Americans, including the awful, gas-lighting boyfriend, Christian (Jack Raynor), the intellectual, Josh (William Jackson Harper), and the requisite intolerant horn dog, Mark (Will Poulter), who’re led to their doom by a typical model of ironic European civility, Pelle (Vilhelm Blomgren). These actors are as good as the material allows, but they are playing stereotypes pitifully unsuited to the piercing grief that Pugh brings to the table as a young woman who’s bereft and relentlessly taken for granted.

Missed opportunities come to litter the second half of “Midsommar.” We’re told that this community practices intentional inbreeding to yield a deformed prophet who is untroubled by what? The burden of being attractive? It’s a detail that’s included merely for grotesquery, so that we may be treated to a few close-ups of a ravaged face.

We’re also told that these people believe in suicide at age 72, as a way of avoiding the bitterness of old age and preserving resources for their children — a great topical idea that’s given lip service and forgotten. We also expect the rituals to gradually become violent, as the community’s propensities for peace and carnage increasingly comingle. But most of the characters are killed off screen, in conventional slasher-pic fashions that fail to bring the narrative to a head.

Yet the climax, an inevitable homage to “The Wicker Man,” is moving, as Aster pares away his ostentatious gimmicks to home in on an epic close-up of Dani’s face as she achieves a disturbing reckoning. Aster is not entirely without a sense of humor either, as he has the stones to even include a reference to the notorious “Wicker Man” remake with Nicolas Cage. Ultimately, though, this cold, savage, self-conscious movie is more interesting than good.