Review: "The Opposite House" by Claudia Emerson

A posthumous collection of poetry remains true to the end. 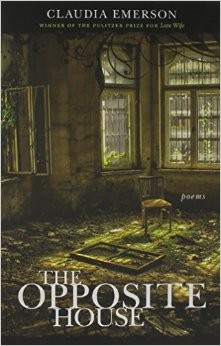 Virginia lost a literary treasure Dec. 4 when Chatham-born poet Claudia Emerson died of cancer in Richmond, where she moved in 2013 to teach at Virginia Commonwealth University. It’s not surprising that her posthumous book, “The Opposite House,” published by Louisiana State University Press this month, targets death and times passing.

True to her other work, notably her masterpiece “Late Wife,” which won the 2006 Pulitzer Prize for poetry, she combines morbidity with wit and intense attention to detail.

The title poem in this effort is a nod to “There’s been a Death in the Opposite House” by Emily Dickinson, the famous 19th-century poet Emerson greatly admires. Emerson realizes a subtle but powerful memory by closely observing the details of an abandoned domicile with window “sills, sashes” and “banisters hand-smooth” before it is subsumed by crawling sumac.

Emerson is definitely a Virginian, and she finds plenty to write about in her home state. One rather creepy example is “Virginia Christian,” a 17-year-old black girl who was the first female in the state to be put to death by electrocution in 1912 for killing her white employer who accused her of stealing a locket. On the night before the execution, witnesses “reported her to have a black man’s sleep, untroubled, sound as though from some hard labor.”

Emerson didn’t start publishing until middle age after studying at the University of Virginia and the University of North Carolina at Greensboro and teaching literature between several odd jobs. She pays homage to one of them in her poem “Rural Letter Carrier,” where she describes her 86-mile-long daily route. “I stopped at the country store where a few bottles of soda floated like blasted fish in the drinkbox, where men checked deer and turkeys and bought bait, where no one knew any news but of who died.”

One poem rings true to my days working years ago on a small daily newspaper in Eastern North Carolina. She describes a soon-to-vanish drive-in movie theater where “the owner had finally resorted to x-rated films and an all-girl concession stand where a man would wait in line for a sweaty bottle of beer and a pricey bucket of wings ...."

Emerson taught for years at the University of Mary Washington in Fredericksburg. One reason for her switch to VCU was to be close to the Massey Cancer Center. But her survival wasn’t in the cards to the dismay of thousands of her devoted students and fans among whom I count myself.