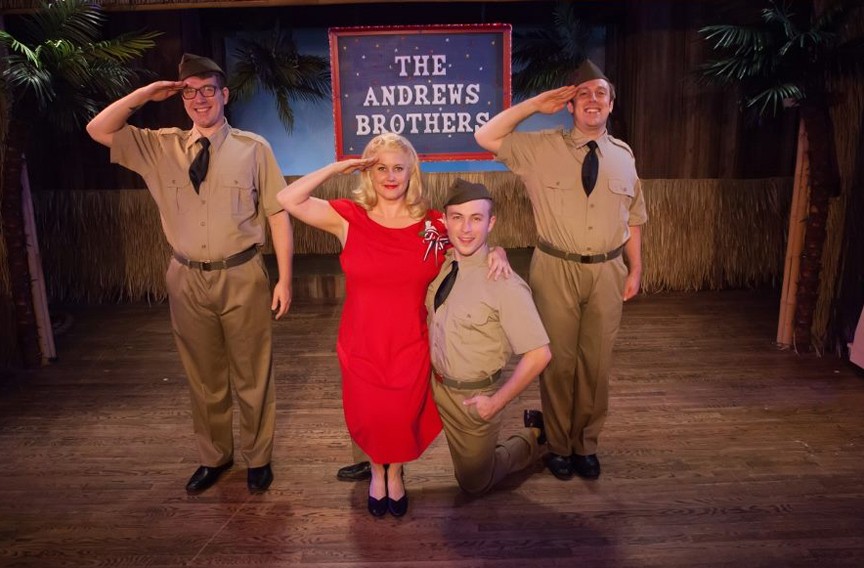 The average jukebox musical is like a bland stew: big chunky songs floating around in a pretty weak plot, unseasoned by depth of character or compelling conflict. Swift Creek Mill’s latest, “The Andrews Brothers,” rises above average, thanks to a few key elements that add some welcome spice to the mix.

Principal among these is Georgia Rogers Farmer who plays fictional 1940s-era pinup girl, Peggy Jones. She arrives on an island in the South Pacific to make her debut appearance at a USO show. There she finds three stagehands — Max, Patrick and Lawrence Andrews (P.J. Llewellyn, Caleb Wade and Ian Page) — who are trying to pass as Peggy’s backup singers. The boys impress Peggy so much that when the show’s headliners, the Andrews Sisters of “Boogie Woogie Bugle Boy” fame, cancel due to illness, she convinces the fellas to don skirts and pretend to be the famous trio.

While this setup may seem contrived, well, OK, it is contrived. But compared to other wafer-thin plots, this one proves remarkably appealing. The first act involves Peggy warming up her new backup singers, which is something that would actually happen, and so doesn’t require excessive suspension of disbelief. We also witness an adorable attraction grow between Peggy and Patrick, a playful dynamic that never gets annoying thanks to Rogers’ girl-next-door sweetness and Wade’s charming turn as the stuttering, star-struck Patrick.

Of course, these machinations are merely excuses to run through nearly 30 peppy tunes, both famous hits and obscure one-offs that GIs would have heard on the radio during World War II. Utilizing a robust eight-piece orchestra, musical director Travis West shines, delivering a consistently appealing score. The Brothers achieve a winning vocal blend and, in moments when Rogers commands the spotlight, the show soars on the strength of her golden voice.

While a musical delight, there’s still plenty to fault the show for, like only giving each of the other brothers one defining characteristic and little else. The cross-cultural songs “Cockeyed Mayor of Kaunakakai” and “Cuanto Le Gusta” may have been a hoot back in the day but stick uncomfortably in the craw now. And some choices were puzzling: Costume designer Maura Lynch Cravey evokes the period with some fine frocks, but little is done to make the Brothers look like women for the second act’s show-within-a-show.

Even so, director Tom Width remains a master of high-velocity humor and onstage pratfalls. Llewellyn, Wade and Page throw themselves into the physical comedy with gusto and there are moments of genuine hilarity. A bit where two audience members are successfully integrated into the song “Six Jerks in a Jeep” demonstrates the skill of the whole cast. Audience participation often seems gimmicky; instead, this scene ends up a production highlight.

Width’s scenic design is largely utilitarian, but he adds impressively rendered nautical props. Kate Blair’s lighting design gets the job done without fanfare. Jukebox musicals like “The Andrews Brothers” are comfort food for some. Thanks to quality ingredients including Rogers’ charisma, the cutesy chemistry between her and Wade, and a full-bodied backing band, this concoction will be satisfying audiences all through the holidays.

“The Andrews Brothers” runs at Swift Creek Mill Theatre in Colonial Heights through Dec. 31. Tickets and information available at swiftcreekmill.com.