REVIEW: Swift Creek Mill’s “Count Dracula” has spectacle on its side 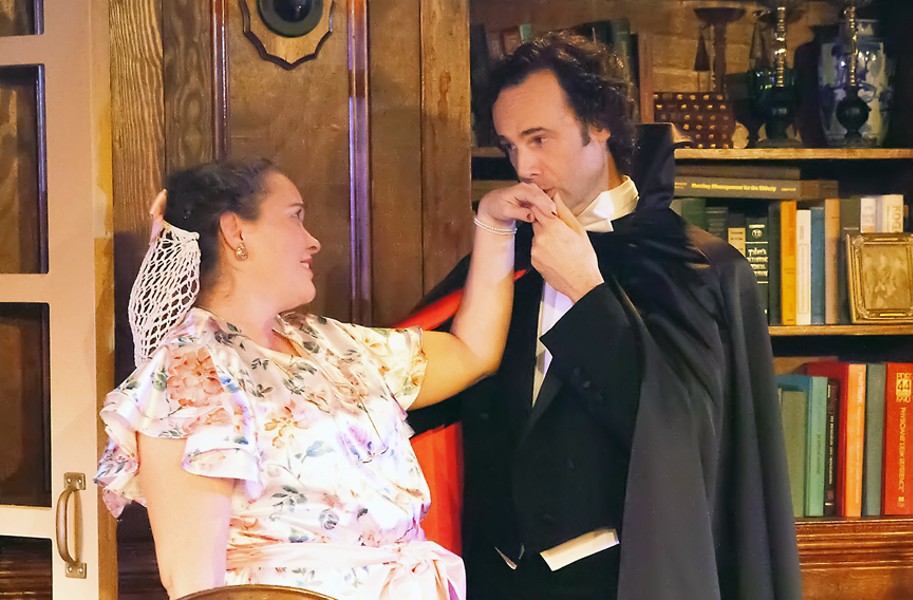 Kerrigan Sullivan is fantastic as Sybil and Jeremy Gershman is fluid but not that scary in Swift Creek’s take on the Bram Stoker classic “Dracula.”

The play is meant to be a witty retelling of the novel, but Tiller's script calls for drawn-out scenes in which characters deliver lengthy exposition, sipping coffee and discussing how to capture the vampire, which deflates the moments when they actually do something.

By focusing on the least active parts of the story, which are often the least interesting onstage, the production is left to rely on clever stage tricks and special effects for its appeal.

Director Mark Costello has opted for an over-the-top approach to acting, and the tone of this production feels confused. At turns it's trying to make you laugh or jump out of your seat, but neither the humor nor the horror lands.

Artistic Director Tom Width's special effects, while great, contribute to the tonal confusion. Sometimes they're clever and effective, like the painting above the fireplace through which Count Dracula watches the occupants of the Seward home. Other times, the effects were lackluster, unsurprising or campy. Frank Foster's scenic design was excellent, though. The Sewards' home looks authentic to the time period, and I liked how the stage could transform to Castle Carfax. Joe Doran's lighting design was effective, and created the right mood in the spooky scenes.

This production features some great actors, but also some underwhelming performances and over-the-top accents. As Dracula, Jeremy Gershman's history with dance is evident, his movements are smooth and fluid. But he isn't very scary and never feels quite sinister enough. Bartley Mullin's frenetic take on the asylum patient Renfield is the best part of the show, a consistent source of energy onstage. Kerrigan Sullivan is fantastic as Sybil, vacillating between the character's ditzy persona and her dead-eyed, mesmerized servant self. As Mina, the young girl whose blood Count Dracula covets, Caity Brown slips seamlessly between shy, reserved waif and evil seductress.

Unfortunately, this production is also a reminder of how sexist vampire stories can be. Mina's character is chastised for flirting with her fiance and for looking at herself in the mirror too much. These very actions are supposed to indicate that she must be under the influence of dark forces. Sybil, meanwhile, is treated as ridiculous for her sexuality.

Both women are portrayed as mentally inferior to and easily manipulated by the men around them, especially Dracula, who is constantly mesmerizing one or both of these characters. More than once in this play, some guy throws his arms up in frustration, exclaiming "Women" as the source of his exasperation.

With humor like that, a running time of nearly three hours, and a stagnant script that drags on with little action, this just wasn't the play for me. S