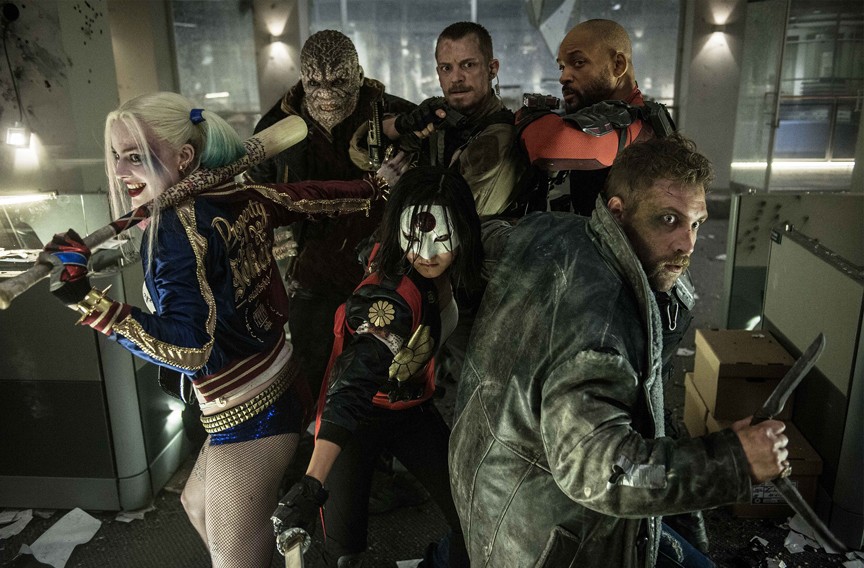 Summer popcorn movies often are accused of being formulaic. That’s not true for “Suicide Squad,” a costume caper so lacking in formula it feels unhinged. If only it had some formula.

An hour in and it’s still introducing characters, not one of them defined as a protagonist. The plot is clearer, but it’s absurd, even by the standards of the genre: A Defense Department expert named Amanda Waller (Viola Davis) convinces the nation’s brass that the next Superman-type Earth visitor could be a super villain. Therefore, she reasons, they should scrounge up all the “meta-humans” they can find -- and she can find only nut-job criminals -- to form a special operations group in case the threat materializes.

The generals and admirals all are easily convinced, but people in the audience may have doubts.

First of all, how does Waller demonstrate these super villains’ super villainy and necessity for the nation’s defense? With footage of Batman (Ben Affleck) catching them, one-by-one. Catching them really, really easily. The implication is difficult to decipher. Why do they need these people if they have Batman? Do they need to release them from prison to deal with Batman? In case Batman has a sick day? In case something more powerful than Batman emerges? But weren’t they all defeated easily by Batman?

Here’s a rundown of the super people and their powers Waller found that supposedly will keep the D.C. Comics world safe in case a godlike but evil super being ever arrives on Earth:

There’s Harley Quinn (Margot Robbie), who wields a baseball bat; Killer Croc (Adewale Akinnuoye-Agbaje), a guy who has scary-looking crocodile skin; Deadshot (Will Smith), a man with perfect aim using any gun; Captain Boomerang (Jai Courtney), who’s kind of like a techno-punk Crocodile Dundee with a boomerang; and Diablo (Jay Hernandez), a tatted gang-banger who is D.C.’s answer to the Human Torch.

Do any of these meta-humans sound that intimidating? Last time I checked, beings like Superman were immune to bullets, fire, wooden bats and, yes, even crocodile teeth. It’s doubtful that General Zod’s brother Rod is quaking in his boots somewhere near the outskirts of Krypton.

Sure, these are little-kid-type arguments I’m making, but that’s because “Suicide Squad” wouldn’t make sense even to a little kid, not one worth his salt in iPad comics.

But the poor execution doesn’t stop there. Warner Bros. just doesn’t seem to understand the appeal of the superhero movie. It’s supposed to be fun and exciting, not brooding, not bang-your-head-against-the-seat crazy. We need a reason to care, people to root for, villains to root against.

Reasons are attempted, in the form of back stories presented as intel by Waller, but they aren’t super. Deadshot has a daughter. Harley Quinn has a virulent strain of Stockholm syndrome. The guy with crocodile skin can’t get a match on his Tinder account. It’s all surface-level drivel. Except the last one. Tinder rejection is nothing to scoff at.

Everything in “Suicide Squad” is comical, but presented with tone-deaf sincerity. Harley Quinn speaks like a gun moll in a 1930s B-movie gangster film, set in Brooklyn (“It wuz nice tawkin’ to ya!”). Deadshot wears a red plastic eyepiece for aiming that looks like part of the spy gear I used to buy at Toys “R” Us for my nephew when he was 7. Flame dude became a conscientious objector in prison and refuses to fight, a character trait difficult to describe without laughing.

“Suicide Squad” makes Zack Snyder movies look restrained and coherent by comparison. It’s hard to believe this movie was directed by David Ayer, the genre specialist who wrote “Training Day” and directed such other gritty cop movies as “Harsh Times” and “End of Watch.” He must have lost control, if he ever had any. That he wrote it is almost impossible to believe. It bears no resemblance to his other films, either in content or style.

There are a couple of decent things about the movie, moments where Ayer’s influence might be shining through. Jared Leto’s Joker, for example, is different enough from Heath Ledger’s to make one wish the movie were more about him. Unfortunately it’s not. It’s about a bunch of hopeless dopes.