Latest blockbuster more of a remix than a sequel. 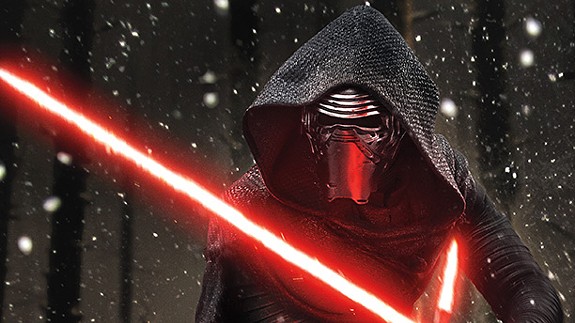 There are two competing forces in the latest “Star Wars” installment: Huge relief that George Lucas didn’t have anything to do with it, and a little disappointment that so much of it is exactly like “Episode IV: A New Hope.” The new "The Force Awakens” is so much like the original film, in fact, it’s more apt to call it a remix than a sequel.

The movie begins under the belly of a what looks like a new-fangled Star Destroyer, where Nazi-esque forces of evil plot their next move. From there it jumps to a desert planet, where a blippering droid carrying top-secret information finds young heroes eager to be our only hope. A few screen-wipes later and they’re off to save the galaxy.

As one character points out late in the film, that massive, spherical, planet-destroying laser-cannon thing, whose shields the Rebel Alliance needs to knock out so they can blow it up before it destroys what’s left of their bases? That’s absolutely, positively nothing like the Death Star. It’s a lot bigger!

I guess it’s not a surprise that Disney and director J.J. Abrams would try to salvage the series this way. “Star Wars” fans have suffered since 1999 under the tyranny of the dark side, epitomized by Jar Jar Binks and the rest of George Lucas’ astoundingly dreadful prequels. So it’s hard to blame the first sequel for trying to right the ship by simply dusting it off. If the Millennium Falcon ain’t broke, don’t try to fix it. Just change up the newer characters a little.

They include an orphan with mysterious powers named Rey (Daisy Ridley), an ex-Storm Trooper named Finn (John Boyega) and a hot-shot pilot, Poe (Oscar Isaac). Theirs is also a digitally-enhanced milieu. But this one is meant to look somewhat real and more like the originals than the antiseptically-scrubbed prequels. The X-Wings they fly look held together by spit and duct tape. The snowy forests they fight in seem alien yet alive, like real places.

The only real question is what they’re fighting and who they’re fighting for. It’s a little confusing how these forces have found themselves in the exact same standoff a scant 30 years or so after the Rebel Alliance destroyed the Empire. What happened to the newly victorious Republic? How has the recently refurbished force of evil amassed an entire new Empire so quickly?

The movie does provide a little bit of explanation that “Star Wars” defenders might be able to spin into an intractable argument. I won’t spoil what it is except to say I’m not totally buying it. And more importantly, I’m wondering who will really understand it, not without being forced to enhance it on their own.

I never thought I’d have to argue for a little exposition in a Hollywood blockbuster, but “The Force Awakens” could use it. It brings back a host of familiar faces from the original. Too bad they couldn’t include Obi Wan, who did everyone a favor in “Episode IV” by explaining to Luke what the heck was going on.

The other really off-note comes from one of the main villains, who looks more like a “Lord of the Rings” character – which ends up making sense after a quick scan of the credits. It’s well known that an adventure’s heroes are only as good as their villain. Maybe the first three movies were so special, and we rooted so hard for Luke, Leia and Han, because of Darth Vader. That’s something the series has struggled with since the end of “Return of the Jedi.”

“The Force Awakens” tries its best, with Adam Driver sinister if not scary as Kylo Ren, the series’ new Darth Wannabe. But he’s no Vader, and if there’s one thing more true than the Force itself, it’s that no one ever will be. Not unless some Jedi screenwriting trick succeeds in bringing him back.

Aside from those nagging problems, “The Force Awakens” is satisfying “Star Wars” stuff. The fact that the story arc is entirely predictable isn’t a deal breaker because it’s paced very well and full of likeable characters and impressive set pieces (some more original than others). Advice for even the biggest skeptics: Go see it without fear. “The Force Awakens” will be with you, and it will re-awaken what you love about the franchise. (PG-13) 136 min. 4 STARS