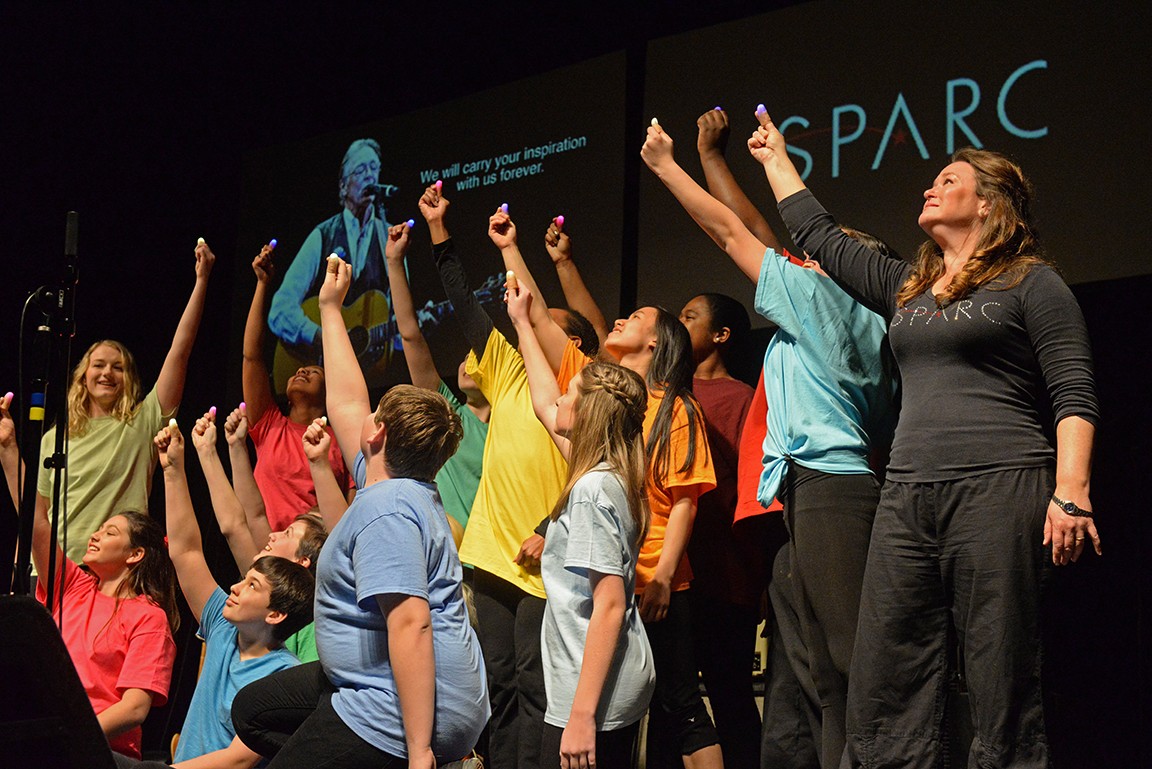 Robbin Thompson penned many songs throughout his long career as a songwriter -- one of which was officially designated as Virginia's popular state song last year.

Thompson's last recorded work was a celebration of life itself, entitled “A Real Fine Day.” On Sunday, Feb. 28, the music lovers who packed the National on a sunny afternoon for a tribute to Thompson, the tunesmith, enjoyed an unforgettable experience -- a real fine day, indeed.

Chief among those who put together the well-run event were Bob “Rico” Antonelli, Velpo Robertson, who acted as music director, Skip Rowland and Jan Williams, who acted as technical director.

The show's proceeds are to be donated to two local nonprofits, SPARC and JAMinc. And, speaking of SPARC, one of the highlights of the show was the segment in which a group of youngsters from that splendid program for kids rushed onto the stage to dance along with a recording of Thompson singing “A Real Fine Day.” It prompted more than a few grizzled Thompson fans to wipe tears away from their cheeks.

All of the songs performed during the concert Sunday were written by Thompson. "At times, the love in the room was overwhelming,” said Skip Rowland, who photographed the event for the planners. “In addition to the music, everyone was treated to video contributions from Phil Vassar and Timothy B. Schmit."

Robbin's stories were told onstage by some of the performers. Mike McAdam reminisced about meeting Thompson when McAdam's high-school band shared a bill with Mercy Flight, at the behest of the late Tom Maeder, who represented both bands at the time. McAdam chuckled, remembering how tough it was to follow Thompson, even then.

Brad Spivey recalled the time he went to a Robbin Thompson show at Ashland Coffee & Tea, and afterward asked Thompson to sign the CD he bought. “I felt a little goofy asking a friend for his autograph,” he said.

Thompson gladly signed it, but he added a message that Spivey imagined would be something like, “To my friend, Brad,” or words to that effect. But when Spivey looked at the CD, over the signature it read, “Listen and learn.”

Performers came from as far away as Chicago and Nashville to be onstage for a song or two. And many attendees also traveled to be there for this once-in-a-lifetime show.

Pam Barefoot made the trek to Richmond from the Eastern Shore. Barefoot, who has known Thompson since their days at Virginia Commonwealth University, is now the president of Blue Crab Bay Co. A few years ago, she put together three Robbin Thompson concerts down in her neck of the woods.

“Prior to the 2011 concert,” Barefoot said, “we walked around town and passed by the Roseland Theatre. Robbin told me his dream was to perform there, so I decided to see if I could make that happen … Robbin has a loyal following on the Eastern Shore.”

From the stage, Chuck Wrenn thanked former-state Sen. Walter A. Stosch for his part in having the General Assembly designate “Sweet Virginia Breeze,” written by Thompson and Steve Bassett, as the popular state song. Wrenn also read a letter from Gov. Terry McAullife.

Like many other baby boomers who were at the National, both Barefoot and Wrenn were at the legendary 1970 Steel Mill/Mercy Flight show atop a downtown parking lot. No concert from the hippie era in Richmond ranks above it in pop-culture importance. Steel Mill was Bruce Springsteen's band; Thompson fronted Mercy Flight. Not long after that show Thompson joined Springsteen's band as the featured vocalist and toured with that group for the better part of a year.

Two of the other highlights of the show were: McAdam's bluesy performance (guitar and vocal) of “I Won't Quit.” McAdam nailed it. Then there was Miller's singing of “Bright Eyes.” He sounded so much like Thompson that it was noticed by several of the musicians standing in the stage-right wing.

Robert W. “Robbin” Thompson (1949-2015) was born in Boston, raised in Florida and he made Richmond his home for most of his life. Rest in peace, Robbin.