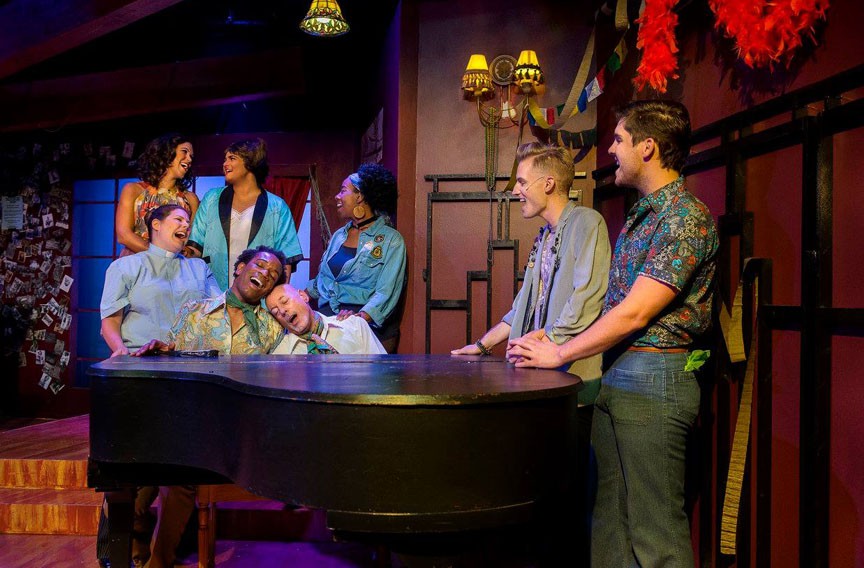 When Wes, a self-involved, Instagram-famous fashion designer, invests in an abandoned building in the French Quarter of New Orleans with plans to open a new shop, he finds himself suddenly in the year 1973. Then the building housed the UpStairs Lounge, a gay bar with a tragic history. Wes must spend the evening here to fully grasp the significance -- and the history -- that he now owns.

Written by Max Vernon, “The View UpStairs” was an off-Broadway hit, and the Richmond Triangle Players’ production marks the debut outside of New York of this uplifting and entertaining new musical. While the play is largely message-driven and can occasionally feel a bit didactic, the characters and songs are enough fun to save it from feeling too overbearing.

The production boasts an impressive ensemble with some strong singers -- most notably Chloe Williams Green and Andrew Etheredge -- who portray bartender Henri and patron Willie, respectively. Dale Sampson -- his voice is pure gold -- is perfect as the lovably insufferable Wes, who embodies the popular image of a millennial. There’s a playful but touching dynamic between Michael Schimmele as the charming and effervescent drag queen, Freddy, and Bianca Brian as his supportive and doting mother.

Lucian Restivo’s direction emphasizes the fun in this play in a way that underscores the pathos when things turn serious. In the middle of a catchy, lighthearted song titled “The Future is Great,” Wes acknowledges for the first time -- and for only a moment -- that things will get much worse before they get better. “Except for the ‘80s,” Sampson sings with aching delicacy, “when all of your friends will die.” And yet the song, like the play, manages to end on a high note.

Leilani Fenick’s musical direction is effective, with robust sound and catchy songs. Kikau Alvaro’s choreography leaves something to be desired, though. This may be because characters have to dance around a crowded set -- perhaps a necessary evil. Designed by David Melton, the set is immersive and a little claustrophobic. Nonetheless, this only adds to the appeal -- the bar onstage feels real with tables and chairs scattered about, a grand piano and incense burning.

Ryan Allen’s costumes evoke both eras perfectly and add visual interest, especially at the end of the play when all the characters get glamorous makeovers before curtain call. This production engages the senses as much as possible, and actors occasionally break the fourth wall, drawing audiences even more into the world of the play. Like Wes, we, too, are transported to the past so that we might gain some perspective on our present.

Audiences at Richmond Triangle Players’ production of “The View UpStairs” can expect a fun, vibrant show with a heavy message of support and unity.