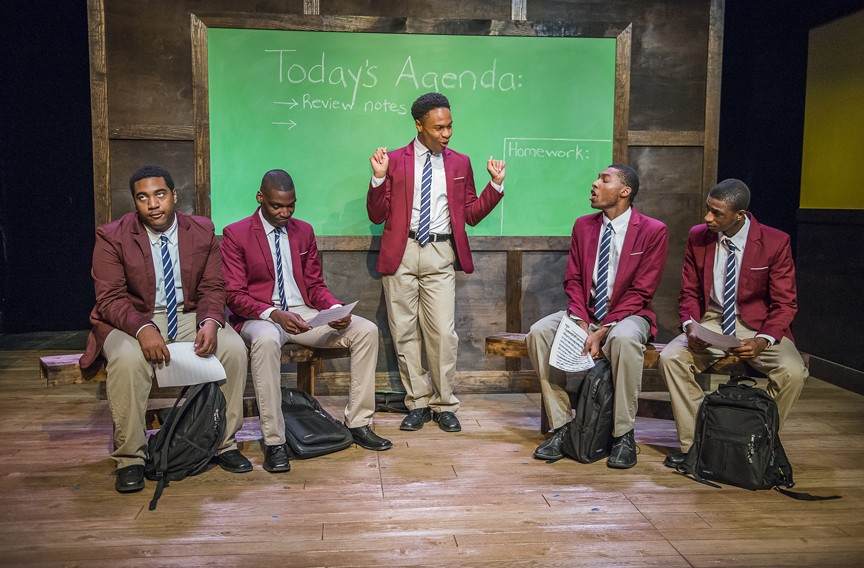 With its compassionate tale and masterful filmmaking, it’s no wonder that “Moonlight” won the Oscar for best picture -- eventually, anyway.

The film tells the story of a gay black man coming to terms with his identity and sexuality. It’s based on Tarell Alvin McCraney’s previously unpublished play, “In Moonlight Black Boys Look Blue,” and with a screenplay by McCraney and director Barry Jenkins.

With similar themes, but less skillful execution, is “Choir Boy,” McCraney’s play about a gay black teen at a private boarding school, being staged by the Richmond Triangle Players in collaboration with Heritage Ensemble Theatre Company.

“Choir Boy” centers on Pharus (Jamar Jones), a bright student attending the Charles R. Drew Prep School on a scholarship. Assertive in his identity and a bit of a showboat, Pharus is distracted while singing the school anthem at a graduation ceremony by a schoolmate hissing epithets at him. He refuses to give up his detractor to the school headmaster (part of the school’s honor code could best be described as “Stop Snitchin’”), but enacts revenge as choir leader. Pharus’ main antagonist is Bobby (Akiel Baldwin), who regularly calls him a number of schoolyard epithets. The two often quarrel, but the main conflict of the play comes from an unexpected source.

As Pharus, Jones is all sass and snark, but also handles his character’s quieter moments well. Baldwin is funny as the loudmouthed Bobby, providing a suitable counterpoint to Pharus. Vegas Krane also does good work as Headmaster Marrow, the put-upon principal. Playing Mr. Pendleton -- an old-school white educator taken out of mothballs -- Christopher Dunn brings gravity to his role.

While director Margarette Joyner gets at the humor of McCraney’s script, it doesn’t nail the dramatic moments as effectively. This is most evident in a series of scenes near the end where students enter Headmaster Marrow’s office to confess.

Where “Moonlight” quietly invites its viewers into the thoughts and feelings of its shy protagonist, “Choir Boy” feels at a distance from Pharus. It has its strong points -- particularly in the scenes between Pharus and his sympathetic friend A.J. -- but it’s a more a play in which things happen to Pharus than we see him change as a person.

As you’d hope of any show with choir in the name, there’s a lot of singing, and the cast members sound wonderful in their a cappella performances under Anthony Ford’s musical direction. Vinnie Gonzales’ excellent set design includes a rotating wall that doubles as a wood-paneled classroom on one side and a dorm bedroom on the other. The Beyoncé poster above Pharus’ bed is a nice touch.

As much as I appreciate the show’s subject matter -- and there really should be more works about gay youth -- it ultimately feels unfinished, and not even the strong cast can overcome it.