A vibrant and immersive take on a Broadway classic. 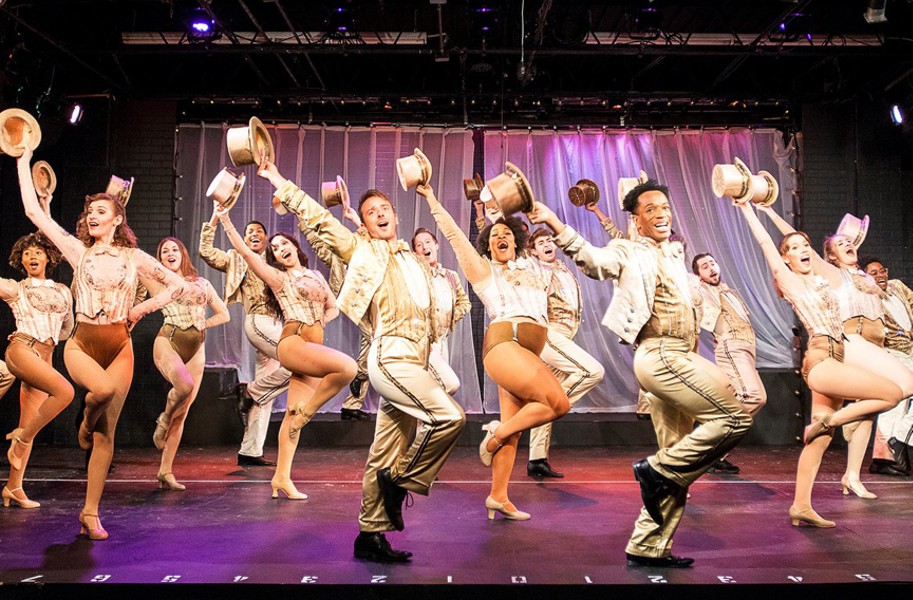 One of the classic musicals, “A Chorus Line” features ample opportunity for local performers such as Alexa Capeda and Alexander Sapp to shine.

Background players, integral to any show, are so often overlooked.

Based on interviews with professional dancers, “A Chorus Line” invites audiences to look more closely into the lives, struggles and sacrifices of the men and women who sing and dance in support of the big-name stars.

When it opened at the Schubert Theater in 1975, “A Chorus Line” took Broadway by storm, earning 12 Tony Award nominations and winning in nine categories, also receiving the Pulitzer Prize for drama the following year. To this day, the musical remains beloved for its catchy, recognizable show tunes and a story that is universally relatable in its exploration of rejection, victory and the deep-seated passion that drives us all to pursue our dreams.

Richmond Triangle Players’ production of “A Chorus Line” is true to the original, set on an empty stage flanked with mirrors, with a slew of actors in dance attire that immediately grounds the play firmly in the 1970s. Under Justin Amellio’s direction, this show is vibrant and immersive. The famous opening scene unfolds slowly, naturally, with actors taking to the stage to stretch and practice for their ensuing audition while the audience is still filing in. By the time the house lights go down, the entire cast has crowded onstage. Then the music begins and the dancers snap into formation and Amellio’s choreography makes the Robert B. Moss Theatre’s relatively small stage feel big and splashy.

This large ensemble is diverse yet cohesive, and the show also provides ample opportunity for individual performers to shine -- and shine they do. Alexa Capeda’s vocal solos, as the spunky Diana Morales, are some of the best in the show. Daria DeGaetano plays Cassie, the soloist who wishes to return to the chorus line, with elegance and poise, and Zuri Petteway brings her sass to the stage as aging chorus girl Sheila.

Alexander Sapp is truly excellent as Zach, the imposing yet compassionate director who shouts his demands, makes swift cuts and finally entices the remaining dancers to share their personal stories. As the meticulous assistant Larry, Andrew Etheredge is perfectly cast, and I only wish we got to watch him dance more. Katherine Wright will amuse you with her comically bad vocals, and Steven Rada will break your heart as Paul, a dancer whose anxiety about disclosing his past builds to the play’s dramatic climax.

While Amellio’s choreography is great during the big ensemble dance numbers, it sometimes falls flat during solo routines. “The Music and the Mirror,” which sees Daria DeGaetano dancing her heart out on an empty stage, should feel like a big, triumphant display of talent. But the choreography is boring and a bit repetitive, ultimately failing to serve the moment.

Joey Luck’s sound design has actors singing without personal mics to recorded music. This works surprisingly well due to the four strategically-placed overhead mics picking up vocals. However, some actors are better than others at making sure their voices are getting to the mics and it is occasionally difficult to hear a soloist over the ensemble. Frank Foster’s set is simple and effective, and Michael Jarrett’s lighting is crucial to this production, washing the walls in color, the spotlight guiding audience attention to one face or another along the line of dancers. Alex Valentin’s costumes mimic those of the original, right down to the dreamy gold suits and top hats at the end.

“A Chorus Line” is a Broadway classic, and the theater has done it right with this production. Musical lovers and Broadway fanatics should run, not walk, to the box office screaming “God, I hope I get it,” because this “singular sensation” is already close to selling out.

Ed. note: A misspelled character's name has been corrected.