REVIEW: "Richmond As Work of Art" at Richmond Public Library 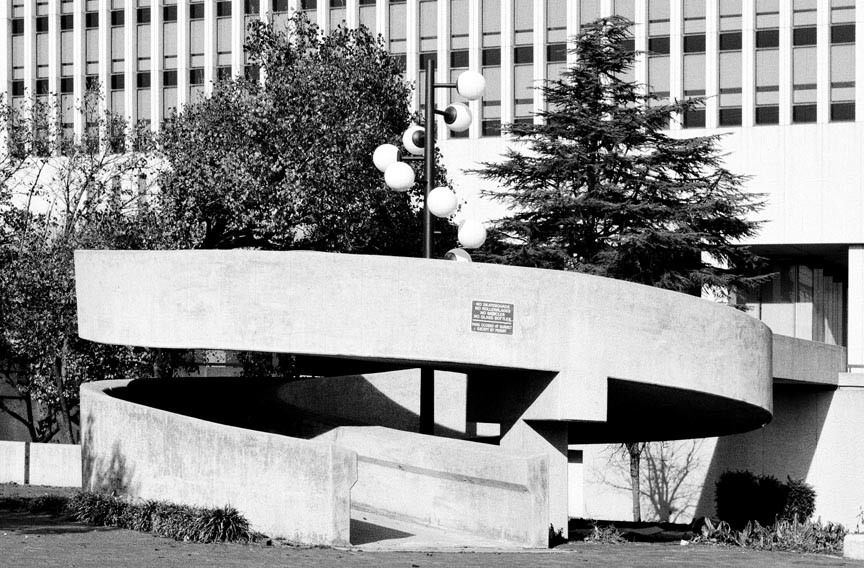 By any measure, Richmond is distinguished physically by two factors-- the James River and a collection of highly-textured and distinctive neighborhoods. That’s the take-away from most books, articles or exhibitions produced here during the past few decades that examined our city’s long history and continuing development.

While few would argue the significance of the river or leafy locales, “Richmond as a Work of Art,” an exhibit now at the Richmond Public Library downtown, offers a refreshingly different and highly enlightening lens through which to view infrastructural RVA.

In a series of graphically simple, but elegantly designed wall scrolls that contain drawings, architectural plans and powerful photographs, curator Emma Fuller and photographer/draftsman Michael Overby offer up a highly contemporary architectural aesthetic that may challenge what places and spaces many folks consider worthy of consideration, not to mention preservation.

Fuller and Overby are two young New Yorkers who are establishing careers in architecture, landscape design and planning. The former is a native Richmonder who, while growing up in the Museum District, explored both the beaten and less taken tracks of town. Overby is from Seattle. Both are graduates of Cooper Union, have traveled internationally, and bring informed perspectives to their examination of this American city. While their aesthetic may be hard-edged architecturally, it is historically astute and on target. The Diamond, they point out approvingly, is a successful concrete monument in no small part because it occupies a prominent site in a “brick city.”

They point out that while a combination of factors-- the James River, Richmond’s “varying terrain” of hills and valleys, and the classical, “Roman” city grid pattern-- form the physical underpinnings of built Richmond, industrial development weaves in and out to create a secondary edge. In addition, “destructive and inspired planning of equal significance," have shaped the character of the city and simultaneously “responded to and activated the grid.”

Richmond, they posit, is different from many other cities with distinctive street grids— say Washington, D.C., Savannah or Indianapolis—in that Richmond’s grid has no origin point, no concentrations of activity. Therefore, points of highly intentional built activity have been dispersed across the landscape with consideration to other factors-- usually topography. The State Capitol, for instance lords over downtown from atop a prominent hill. Urban park spaces—such as those on Gambles Hill (on the Afton Corp. campus) and Libby Hill were similarly placed on hilltops.

What “Richmond as a Work of Art” effectively achieves is an examination of some major points of architectural activity that aren’t always considered worthy of attention.

Some of this is semantics: we are reminded that built Richmond is defined as much by “developmental enterprises as by architectural endeavors.” These include canals, railroad trestles, bridges and highways. This factor—that engineering is as important as architecture in creating the character of a place (and indeed, there is beauty in engineering) helps make this exhibit so timely and insightful.

Wittingly or not, Fuller and Overby include a number of major engineering and landscaping projects and landmarks that, while defining the city, are currently under fire. These include the Diamond, a minor league ballpark, and Kanawha Plaza, an urban park that straddles atop the Downtown Expressway in the financial district.

Curator Fuller tracked down and interviewed landscape architect Donald Richardson, a principal with the internationally-renowned firm of Zion, Breen Richardson Associates, which designed the plaza in the 1970s. One exhibition scroll containing exerts from the interview relays how Richardson’s firm bridged a high speed roadway and created earthen mounds to support major deciduous trees (that, incidentally, have flourished despite minimum maintenance over the ensuing years). It is chilling that, inextricably and with little debate or intelligent input, the city has decided to wipe out this oasis (designed by top-drawer talents) and replace it with a raw sweep of lawn and band shell.

Richmond’s often gritty and muscular character, we are reminded throughout the exhibit, is punctuated by a collection of unique and beautiful-in-their-own-way structures that have been built over time. The show also confronts us with the sad realization that even some of our largest public works are not invincible.