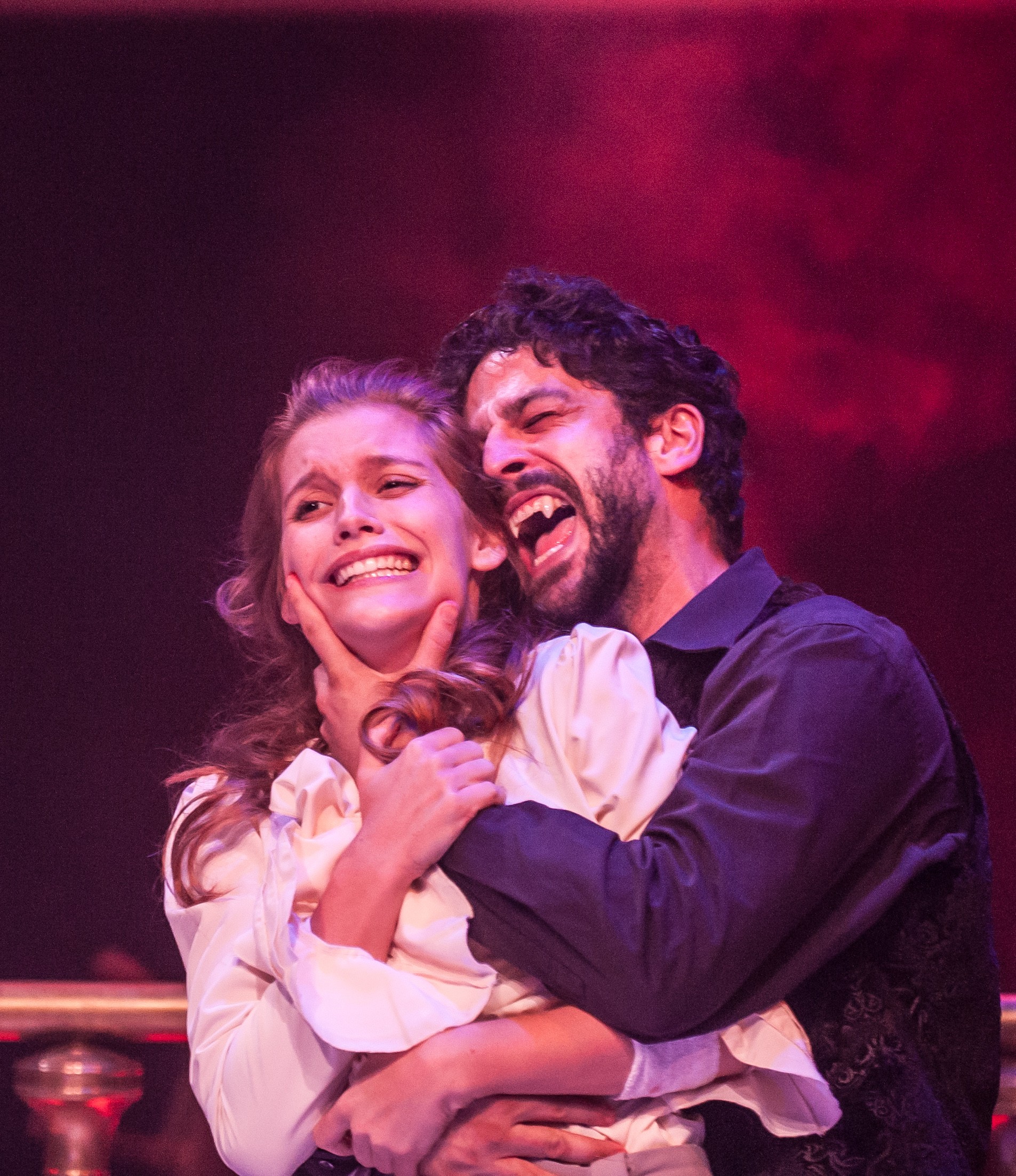 If there’s a similarity between Count Dracula and his enduring popularity, it’s that both are hard to kill.

Since it first was published in 1897, Bram Stoker’s “Dracula” has held a presence in popular culture, thrilling readers and audiences with its tale of a nefarious vampire and the effort to stop him. The story has seen numerous incarnations and reinterpretations, including Stephen Dietz’ theatrical adaptation, being staged by Quill Theatre at the Dominion Arts Center.

Fans of the tale will find a largely traditional interpretation under Daniel Moore’s direction, albeit with a few changes.

This “Dracula” is still the story of a small group of well-bred Brits banding together to fight off a vampire. Near the beginning, Dracula (Axle Burtness) has summoned the young London solicitor Jonathan Harker (Alex Johnson) to his Transylvania castle so he can purchase new digs in England.

Eventually, they realize that Lucy is being supped upon nightly by Dracula, slowly turning her into a vampire. All the while, Seward’s patient Renfield (John Mincks) is under Dracula’s spell, eating bugs and pledging allegiance to him. While all of this hews fairly close to Stoker’s original novel, Dietz also has streamlined the story, excising portions like the voyage of the Russian ship the Demeter. Moore’s direction plays to the sexuality of the tale, particularly in the portions where Dracula has Lucy and Mina under his spell.

Perhaps the most intriguing part of this staging is having Price play Van Helsing, a role traditionally portrayed by a man. Although her accent occasionally slips from Dutch to French, she’s the strongest presence on the stage. If “Dracula” is as much a detective story as it is one of horror, her Van Helsing is something of an adventurer Hercule Poirot.

Dietz’ script includes less of Mina’s contributions to the group, so the gender change goes a long way to restoring the contributions of women from the novel. The only problem is that because Price replaced a male actor during rehearsals, some of the actors occasionally forget to switch the pronoun on opening night. Fields and Mincks also do good work, with the former’s trances convincing and the latter willing to throw himself all over the ground to prove his insanity. But the decision to add a homoerotic dynamic between Renfield and Seward is jarring and detracts from the show. Where Dracula’s seduction of Lucy and Mina is grounded in the supernatural, Seward’s affection toward his patient is predatory, and completely changes his character. While Burtness is charismatic and sexy as Dracula, he doesn’t inspire the fear that you hope he will, and Moore’s direction has trouble building tension.

Skylar Broughman’s spooky lighting design perhaps is the best ever attempted at the Dominion Arts Center’s Gottwald Playhouse, including a floor-level light that amplifies the actors’ shadows against the ceiling during a scene at the asylum. Anna Bialkowski’s costumes are more period-inspired than authentic -- both Price and Turner wear pants instead of full dresses -- though the stake and hammer holster Price gets to wear is undeniably cool.

Altogether, this “Dracula” is a serviceable but earthbound take on the count who won’t be counted out.