Refreshingly modern take with female Hamlet is a "gem." 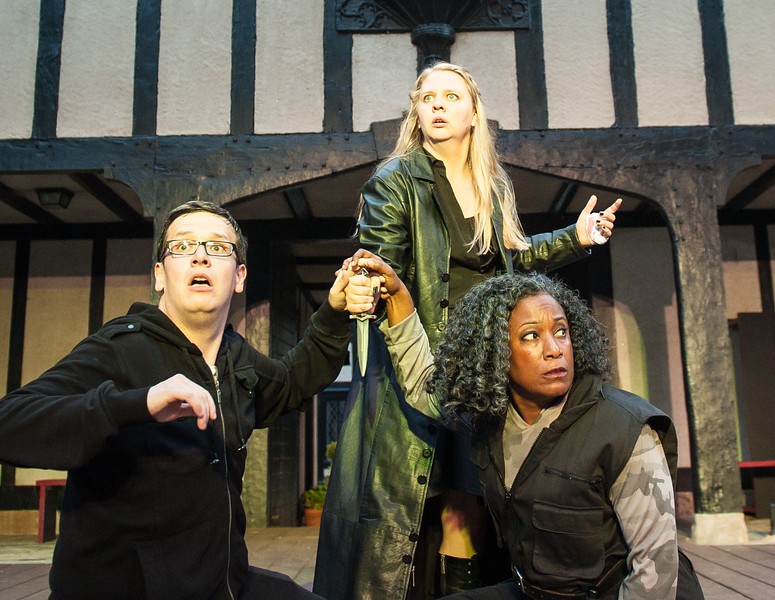 When first-timers ask for advice about seeing Shakespeare, I usually recommend they read a synopsis of the play first.

At this distance from the Elizabethan era, the Bard’s words can sound strange initially to the modern ear, and only the better stagings translate fluidly across the chasm of time. Quill Theatre’s “Hamlet,” currently being staged at Agecroft Hall, is one of these productions.

Under the direction of company artistic director Jan Powell, “Hamlet” has been updated to take place in these modern times. Scrolls have been replaced by smartphones; Ophelia and Hamlet’s declarations of love now arrive via sext. Rosencrantz and Guildenstern have become the kind of bros that play cornhole on Monument Ave. And most notably, Powell has cast Richmond actress Molly Hood as Hamlet.

Aside from some pronoun switches and that Hamlet’s relationship with Ophelia has become a homosexual one, little else is changed to accommodate the reverse gender casting. Hamlet – now princess of Denmark – is still dealing with the fact that her uncle Claudius has usurped the throne by killing Hamlet’s father and marrying his mother. Visited by the ghost of her dead father, Hamlet slowly starts to hatch a plot for revenge.

The role of Hamlet is one of the most challenging roles for a young actor to play, and Hood’s performance is nothing short of masterful. Filled with the need to avenge her father’s death, Hood is at turns angry, funny and melancholic, and she makes Hamlet’s oft quoted speeches spring from the character organically.

Surrounding Hood is a strong supporting cast, starting with Jeff Clevenger’s hilarious performances as the dolt Polonius and a redneck gravedigger in the Yorick scene. As the frat boys Rosencrantz and Guildenstern, Jonathan Conyers and Laurel Maughan are howlingly funny as well.

The amount of humor mined from Shakespeare’s play is startling, but Powell is smart to counterbalance this with Alex Wiles’ completely bereft Ophelia, Jeremy Morris’ charged Laertes and Foster Solomon’s mildly annoyed Claudius.

“Hamlet” has always been highly adaptable to a director’s vision; different stagings may play up Hamlet being repulsed by his mother’s actions, angered by his being deprived of the throne or driven mad by his love of Ophelia. Powell’s decision to play up the humor might slightly detract from the show’s dramatic heft, though this is a minor price to pay for a dynamic and engaging “Hamlet.”

Powell has also taken the scissors to Shakespeare’s longest play, including the elimination of Fortinbras and his conquest of Denmark. In addition to shortening the play, the cut fits in with the modern day setting; the idea that the Prince of Norway would invade Denmark in 2015 would be laughable. Even the technical elements of the show have been reduced to the minimum necessary. The set for most scenes is constructed from just four benches.

It’s a wonderful thing when a dramatically rich classic is paired with a production worthy of its stature, and Powell’s vision of a modern “Hamlet” is a gem. With its excellent performances and humorous staging, Quill Theatre has produced a refreshingly modern and fun take on the Bard.