Review: “Once Upon A Time in … Hollywood” is the most personal film of Tarantino’s career 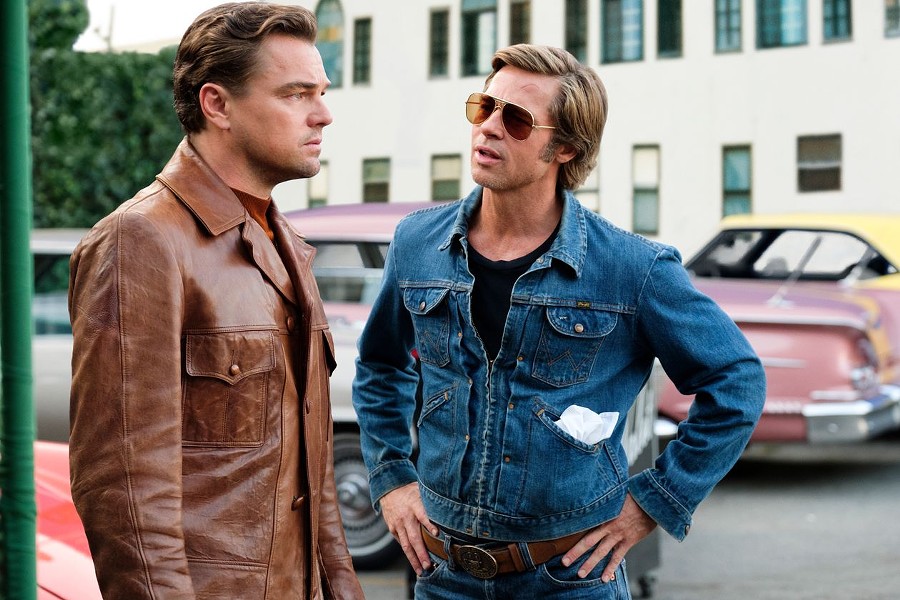 Leonardo DiCaprio as aging television actor Rick Dalton and his best buddy, Brad Pitt, as stuntman Cliff Booth in "Once Upon A Time in ... Hollywood."

What to say about the new Quentin Tarantino film, his ninth and reportedly penultimate feature before he turns Star Trek into “Pulp Fiction” in space? Now in local theaters, “Once Upon A Time in … Hollywood” might be the most personal and controversial movie of his career, but that depends on what knowledge you bring to it.

The nearly three-hour movie is a love letter to old Hollywood that showcases an incredible amount of gorgeous period detail from the late 1960s (Tarantino’s youth in Los Angeles) that should delight movie geeks and fans of vintage pop culture alike.

Strangely, for a film ostensibly about the Manson murders, this is one of Tarantino’s least violent works, ambling along at a leisurely pace for its first 140 minutes. Some people will be bored. While it's not his tightest narrative, I found the first two hours enjoyable simply because I'm fascinated by that time and place and the set detail fully immerses the viewer into that world. All the eye candy allows Tarantino to repeatedly underscore his abiding crush on a bygone era of more manly men. He clearly worships the Steve McQueens of the world who were stoic, but if need be, could kick somebody’s ass without spilling their beer. And he mocks and bashes (literally) the hippies as forebears of today's PC liberals.

The movie does provide insight into the lives of old Hollywood archetypes and the process of making films the old-school way. It mostly takes place six months before the Manson murders and is filled with the everyday working lives of Dalton, who has lost his self-confidence in the shift from television to B-movies, and Booth, his confidant and backbone. Of course, Dalton’s aging career shift parallels that of the old studio system and the new Hollywood (“Easy Rider”) waiting just around the corner. Somehow it feels applicable today as well, as individual stars are getting edged out by CGI creations and tentpole franchises with built-in audiences, leaving new and original storylines in the dust.

If you know Tarantino’s backstory, you can tell that it’s a highly personal film as well, and not just in his usual fanboy gushing over Spaghetti westerns, martial arts masters and women's feet. What may be problematic for these viewers are certain scenes that seem to offer a disturbing defiance from Tarantino regarding his own low-points in the public eye. Yes, I’m talking about his defense on "The Howard Stern Show" of statutory rapist Roman Polanski, but there also seems to be a little shade thrown on the whole Uma Thurman incident. Thurman was injured filming “Kill Bill” and later claimed Tarantino encouraged her to perform unsafe driving work on set.

The first instance involves a scene with Pitt's character picking up an underage, highly sexualized Manson girl (Margaret Qualley) who is hitchhiking and who offers to "blow" him on the drive out to Spahn Ranch. The young girl is clearly the aggressor, and Pitt’s much older character refuses, not because it’s wrong, but because he’s unwilling to go to jail over “poontang.” Read: Tarantino is not really sorry about his Polanski comments, which were of the 13-year-old wanted it-variety.

The other instance comes via the film's terrific child actor, Julia Butters, who is thrown to the floor by DiCaprio during a Western shoot. After the scene, she quickly assures him that she’s fine because she was wearing pads underneath her costume, duh. That might be referencing the flak Tarantino took over Thurman (the two have since patched things up).

The director does manage to go an entire film without one fetishistic use of the n-word, which might be a first. Then again, this movie is primarily filled with white show biz characters from swinging ‘60s Hollywood – and plenty deranged hippies.

If you like Tarantino's work, and not just for the blood and guts, then you might consider this one of his most mature moments. Until the end, it features less of his usual overkill. I would rank it just below “Jackie Brown” and “Pulp Fiction." But if you expect directors and the stories they tell to be politically correct, or to impose today's standards, you may come away disappointed. As A.O. Scott noted in his review for the New York Times, this movie reveals Tarantino's sensibility to be "profoundly and passionately conservative."

Tarantino's films have always been about wish fulfillment, usually revenge-centered in the most obvious, teens-amped-on-candy way. But to see the way this movie has passionately recreated the Sunset Strip and many other period details is the joyful part --there’s even a Mad Magazine cover created for Dalton’s character. And the film’s propulsive soundtrack is great too, featuring deep cuts from Paul Revere and the Raiders, The Box Tops, Deep Purple, Los Bravos, Mitch Ryder and the Detroit Wheels and Neil Diamond. I’m guessing this will be Tarantino’s best-selling soundtrack since “Pulp Fiction.” Still, I think Brad Pitt nearly steals the film with one of his best performances, one that feels like a classic of macho male cinema.

I won't give away the big spoiler in the final 20 minutes, but if you know Tarantino’s revisionist history, you’ll see it coming a mile away. It’s not much of a payoff anyway, especially after such a long and more interesting build-up driven by the characters, and the character of Los Angeles itself in 1969. But those who are in it for Tarantino's gleeful brand of ultra-violence will finally get some bloody satisfaction.