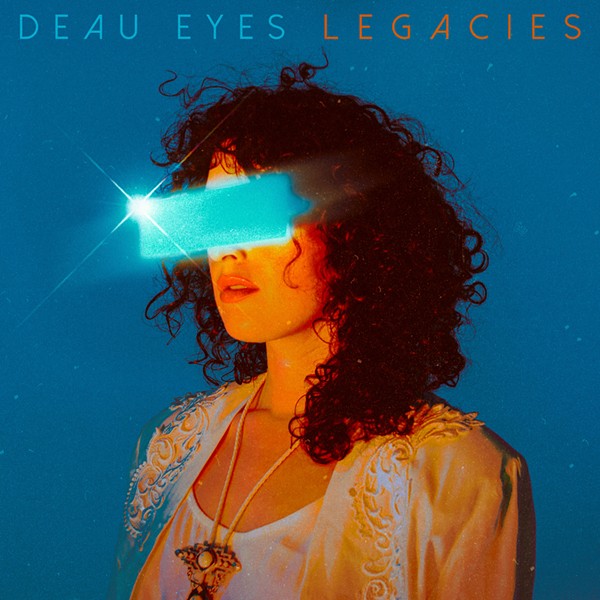 Co-produced by DJ Harrison and Scott Lane, Deau Eyes' sophomore album "Legacies" has been called by singer-songwriter Ali Thibodeau an exploration of what it means to "leave things behind that have integrity and meaning." It was released on local label subflora and Tone Tree Music.

“It’s hard to comprehend/When you don’t know what’s in the other hand/Giving what you can give.”

In the title track of “Legacies,” her second full-length album as Deau Eyes, Richmond singer-songwriter Ali Thibodeau arrives at a fork in the road: Do we live for today, or live for tomorrow?

Questioning how much we should devote to the future is achingly relevant at the start of the global COVID-19 pandemic’s third year — a time when the air can seem too thick with destabilizing forces to see what comes next. But more than halfway through, 2022 is shaping up to be an especially strong year for new music, in Richmond and elsewhere.

Albums made during the pandemic continue to find their way into the world, bringing valuable perspectives on how to process a historic disruption, as well as every shade of grief under the sun. “Legacies” feels connected to those works and different in kind — a refreshing, 10-song portrait of what it’s like to have changed over the last few years, and to have begun looking forward again.

Several songs traffic in consequences and permanence; from the personal impact of unfaithful romance to the broader implications of short-sighted politics, to an ultimate accounting of what two people have in common. All of it unfolds within the frame of two statement pieces: near the beginning is “Moscow in the Spring,” an airy, synth-driven pop tune that closes the book on an era of spontaneity in which Thibodeau would regularly carry around her passport in case the opportunity for international travel arose.

“I won’t drop my life and get on the first flight,” the final chorus declares, breaking with both internal and external expectations. The other bookend is the title track, which brings the album to close with lyrics that describe yearning for devotion amid an atmosphere of rapid change: “I want a love like the legends all have spoken of/In an age where legacies are coming to an end.”

In their own ways, the two songs offer a sense of grounding — a literal manifestation early in the album and an emotional one at the end, working together to illustrate Thibodeau’s newfound commitment to that which is enduring.

The artist provides grounding in other ways throughout the album. She’ll sometimes use repetition to drive a message home, giving it the feel of an affirmation. “Hey, I see you/You matter more than you think you do,” she offers near the end of the track “When,” circling back to the same reassurance moments later. It’s in her voice as well.

Feats of great vocal ability often take the form of ascent, and while you find moments like those on “Legacies,” the power of Thibodeau’s lower register is a unique highlight. The start of “When” dances gracefully in that part of her range, and “Another One Comes Around” dips into it throughout, helping several lines land with a forceful frankness. Then there’s the deep, in-the-pocket vamping that precedes the high-flying outro of “Let's Call It Safer Love” — a reminder of where the ground is before you take off into the stratosphere.

Thibodeau’s debut LP as Deau Eyes, “Let It Leave,” was ranging in its own sense, but within a smaller, more guitar-centric space, owing partly to a compressed production time frame. Longtime friends, Collin Pastore and Jacob Blizzard, helped Thibodeau record those songs at a brisk pace during one trip to Nashville. “Legacies,” recorded last year, took shape over the course of the entire summer, the result of night sessions Thibodeau would kick off after spending her days waitressing.

Two songs here match the bold, bright sound Pastore and Blizzard achieved on “Let It Leave." One is a cutting indictment of American politics titled “Haven't You Had Quite Enough” and the other a tell-off of a two-timer, “Another One Comes Around.” Interestingly, both songs start off at a lower tempo and open up the throttle just after the minute mark, finding their own self-contained sense of sonic momentum. The other tracks veer from center on either side of the lo-versus hi-fi divide. The album’s brief, a cappella opening has the feel of a haunting message left on an answering machine, and “Ends” tugs at heartstrings via a straightforward solo acoustic arrangement that’s adorned only by voice and the sound of the guitar shifting slightly once the performance is through.

Elsewhere, layering allows a grand scale. The title track, which brings the album to a momentous close, builds and releases tension with massive synth sounds and piano that stops and starts on a dime in keeping with the song’s twists and turns. A companion to “Legacies” actually precedes it; “Like The Legends All Have Spoken Of” kicks off the album’s second half, foreshadowing the closing track’s message and massive sound.

It’s easy to imagine an orchestra taking the two songs and melding them into a single song suite. (Here’s hoping someone at the Richmond Symphony is reading this.) Like “Let It Leave,” the new Deau Eyes album had an assist from a pair of co-producers. This time it’s the founder of the Subflora label (formerly American Paradox), Scott Lane, and Butcher Brown keyboardist Devonne Harris — both multi-instrumental powerhouses, and both owners of their own studios. Those changes in personnel and setting are felt most during the album’s R&B-leaning material, which finds Thibodeau in exciting and rewarding new territory.

“Make Some Time” and “Let’s Call It Safer Love” luxuriate in sweetly sung background vocals, airtight drum beats and taut guitar tones. The guitar in “Let’s Call It Safer Love” is a fascinating mix of treble and echoing depth that builds to one of the album’s more virtuosic instrumental runs — a piece of studio magic that disappears in a flash but doesn’t fade from memory. “Moscow in the Spring” fast-forwards a few decades for a more future-facing sound that incorporates another indelible flourish: synth arpeggios that fall out of phase with the time signature to give the track a subtle sense of disorientation. It’s a brilliant complement to the song’s lyrics, suggesting staying on the ground instills its own sense of disorientation.

“Legacies” doesn’t promise stability, but it does manage to connect the present and the future with a sense of determination, and with the same sincerity that made the debut Deau Eyes LP so striking. In “Ends,” the penultimate track, Thibodeau sings: “If you’re there at the end of the road / We’re kindred souls / Breath, blood and bone.”

This set of songs is more proof that Thibodeau’s is a creative journey well worth following.

“Legacies” is out now on the Subflora label. To hear and purchase the album, visit deaueyes.com.