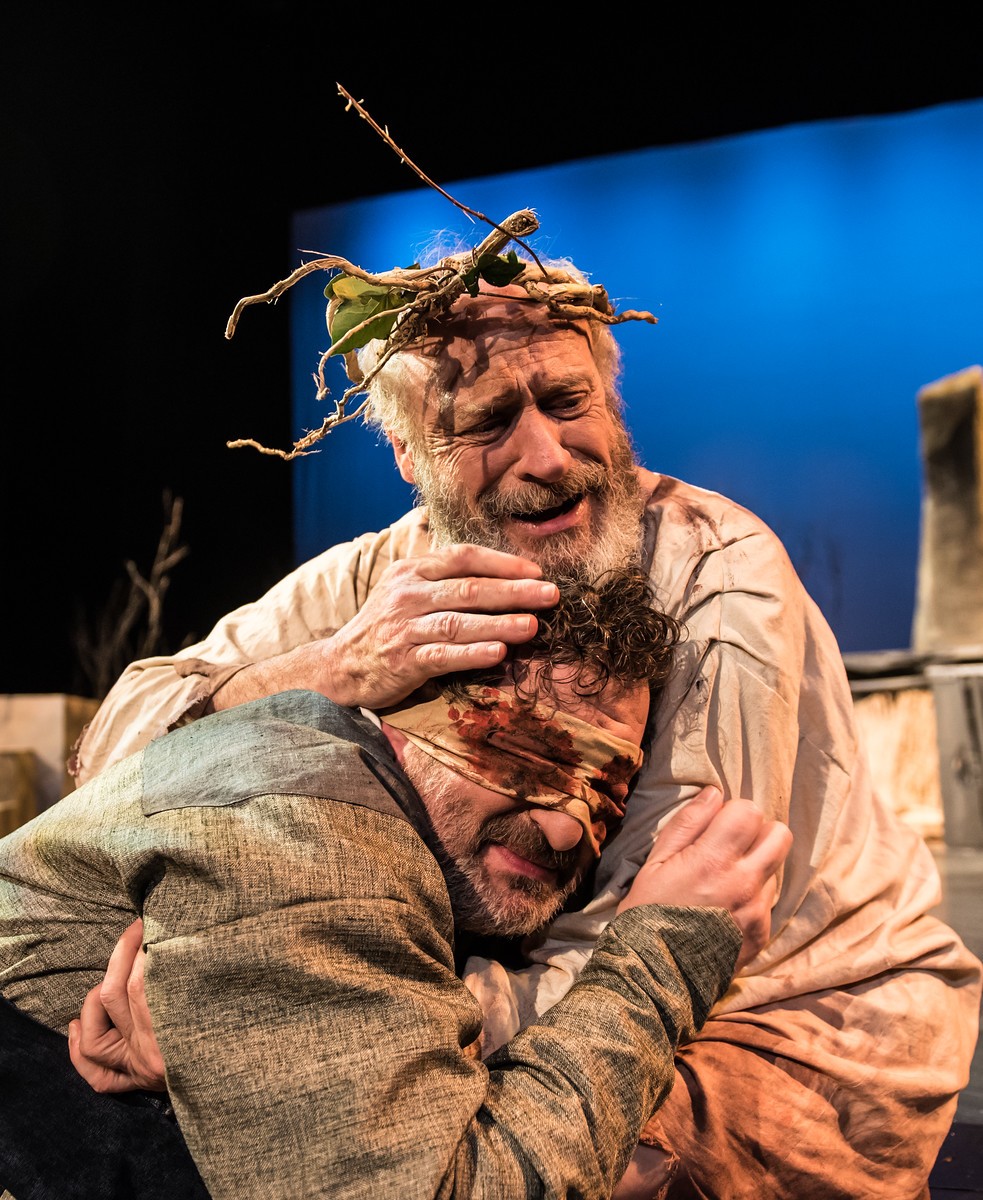 Of all Shakespeare’s works, “King Lear” may be the toughest to stage.

Long thought to be unplayable, its involved subplots, length and the physical demands of its staging are just a few of the obstacles directors face.

But after last summer’s refreshingly modern take on “Hamlet,” director Jan Powell and her Quill Theatre have decided to tackle the challenge with local favorite Joe Inscoe in the title role. The two plays have much in common with their investigations of human nature, family members swiping thrones and questions of protagonists’ sanity. Where “Hamlet” has much to say about ears and hearing, “King Lear” is all about eyes and seeing (more on that later).

Sadly, for all of its talk of gods and supernatural special effects, this production of “King Lear” stays stubbornly earthbound.

Set in pre-Christian England, the play opens with an aging Lear divvying up his kingdom between his three daughters. Each is expected to pledge their love for him, and Goneril (Bianca Bryan) and Regan (Molly Hood) oblige. But when he asks his favorite daughter Cordelia (Irene Kuykendall), she refuses to answer in the same manner, sending Lear into a rage. He banishes Cordelia, and divides her portion of his kingdom between his other daughters.

Soon, Goneril and Regan tire of him, dismiss his entourage and send him into the wilderness as a severe storm begins to rage. There, he’s reduced to nothing and descends into madness.

While all of this is going on, Edmund (Axle Burtness), the bastard son of the Earl of Gloucester (Joe Pabst), makes the kind of power plays that Machiavelli would deem befitting a prince. Edmund seduces both Regan and Goneril and convinces his father that his brother Edgar (David Janosik) is trying to murder him. Eventually, Edmund outmaneuvers his father, becoming the new Earl of Gloucester as his father is blinded.

Inscoe works hard at portraying the king’s mental deterioration, yet he doesn’t quite take the audience along for the ride. Powell and Inscoe seem to be driving at the notion that Lear had Alzheimer’s, which is interesting, as is the decision to have Goneril cry when Lear prays that she become sterile for her ingratitude. Goneril and Regan are often portrayed as simply evil, though this gives the impression that perhaps they knew that their father was already leaning towards mental illness.

The strongest performances come from Pabst and Janosik. The former makes you feel sorry for the old man duped by Edmund, and Janosik – who often fields broad comedic roles – further demonstrates the range he showed in “Hamlet” and “King John” a few years ago.

But there are issues with the staging itself, starting with how hard it is to understand the actors at times. On opening night, the actors frequently rushed, stepped on each other’s lines, and enunciated poorly. And, perhaps this can be explained by the acoustics of the theater, but the actors often became more difficult to hear when they passed beyond the curtain line.

Between actors playing multiple roles and certain characters disguising themselves, it was also hard to discern exactly who is onstage at times. Because there isn’t enough to distinguish between characters, for instance, it was difficult to tell if the male characters accompanying Goneril and Regan in the latter part of the play are supposed to be their husbands or other characters entirely.

Likewise, Tennessee Dixon’s barren wilderness set design – though impressive at first glance – changes so little throughout the show it’s hard to tell where the action is taking place. Various castles and palaces, forests or French encampments, all look roughly the same. With all of these flaws, even audience members familiar with the show may have a hard time following the story.

With its impressive storm scene -- which appears through flash strobe lights on the audience -- BJ Wilkinson’s lighting design is a highpoint, but Foster Solomon’s fight choreography is slow-moving and fairly basic.

As the play reaches its tragic conclusion, it lacks the dramatic heft you’d hope from a great Shakespearean tragedy. To disagree with a line from “Hamlet,” sometimes it’s okay to not watch the great ones go mad.