Take a final chance to catch the mature work of six local artists. 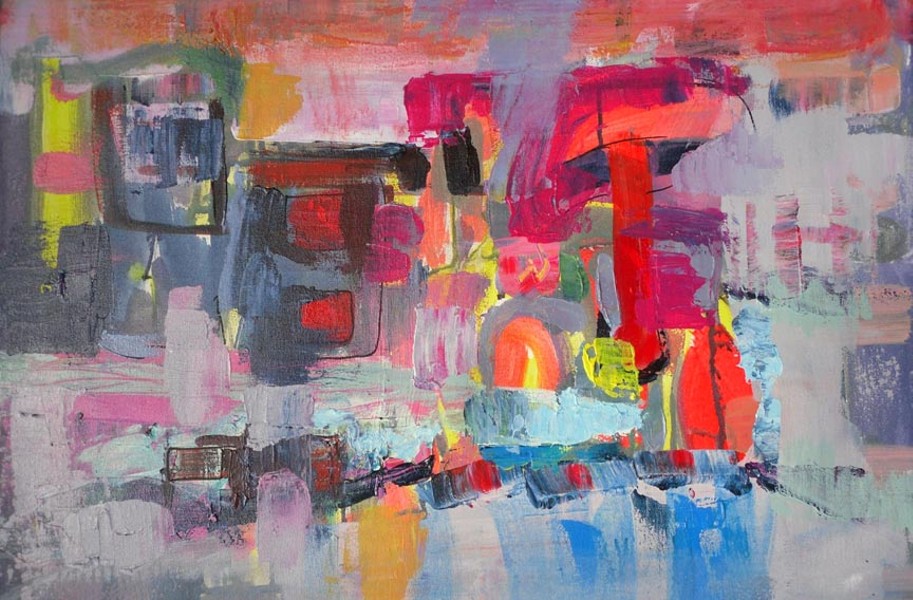 “Drawn to It” by painter Cynthia Erdahl features broad, assured strokes with no fear of color.

Do artists create for themselves or the audiences who experience the work?

This is the broad, age-old question that curator David White, himself a Richmond-based mixed media veteran, poses in “Herald 3,” the handsome and rewarding biennial exhibition now at the Richmond Public Library downtown featuring work by six talents at the top of their game.

Actually, White offers a clear answer: While this determined and highly focused lot — three painters, two photographers and a cinematographer — present highly articulated and personal work, they expect viewers to give back as good as they get. There’s no spoon-feeding here in the form of easily recognizable imagery, so in most cases the viewer must collaborate, focusing his or her personal lens to complete the picture or offer an interpretation.

The marbleized, mausoleumlike, art deco Dooley atrium of library, one of three contiguous spaces in which “Herald” is installed, has seldom looked more activated than it does currently with 13 large works by painters Jim Black and Elaine Rogers who work in quite different ways. There is also an intoxicating video piece by Patrick Gregory in the gallery.

Black is an unabashed abstract expressionist who favors earth tones and is itching to transport his viewers past the apparent flat surfaces of expertly-applied oil and wax on canvas. He does this by suggesting an overall grid organization, but stopping short of a full checkerboard pattern. He offers a single or even a handful of squares or windows that serve as openings to a realm beyond the painting’s surface. These openings add tremendous depth to the masterfully drawn works. The windows also make the canvases inviting — hospitable even — despite their abstraction.

If Black’s works are somewhat brooding, Elaine Rogers’ six oil and wax paintings in soft pastel hues on the opposite side of the room are cheerful. While her “Patterns behind Creation” is obviously a landscape, geography is not the goal here. Familiar lines of a low mountain range, cloud formations and fields are just a point of departure to draw and differentiate those lines with color. “Flames” evokes a volcano but embers and lava flow haven’t yet worked their way down to a wheat field below. Rogers understands the shifting tension that exists between the power of nature and its soft beauty— often contiguous.

In the Gellman Room, a third painter, Cynthia Erdahl, is showing nine medium-sized canvases in either oil or acrylic. She is a painter’s painter with assured and broad brush strokes and no fear of color. “Trying” is an exhilarating painting with jewellike shades of blue, red and yellow with greens. And while the coloring is as vivid as a stained glass window, the piece pays homage to the fresh and energizing abstract painting of the 1950s and 1960s. And as for giving the viewer an opportunity to fill some gaps, “Rumblings” suggests human figures, five of them anchored by a lone presence rendered in black.

Also in the Gellman Room are works by John Grant, a photographer of obvious depth. His 11 works, whose imagery and textures manage to be subtle and obvious at the same time, could read as paintings. The majority of the archival pigment prints are black-and-white images of ice cubes writ large. Grant’s ability to capture the infinite sparkle of the crystals is a wonder to see and proof of this artist’s control of his medium (and ability to print on clear film). Blowing up familiar objects is not new, but Grant takes things to another dimension. In two other photographs he introduces subtle coloring. In the well-orchestrated image “Window” the background appears to be a faded plaid. In front of this are japonica buds and buttons that appear as orbs or some other extraterrestrial objects. It is a sublime work.

Entering and leaving “Herald 3” gallery goers move through a passageway hung with the work of photojournalist Robert Burgess. He presents nine works that reflect a life of travel— from Toulouse, France, to Sonoma, California. But what do say, Rome, Italy, or Ocean City, Maryland, have in common? Burgess is intrigued by built environments and exterior walls in a state of decay. Like Jim Black’s abstract expressionist paintings, these colorful works reveal the possibility of raw beauty in textures, patterns and bold colors.

Finally, for the first time in a Herald biennial, there is a video work, Patrick Gregory’s “Patterns Behind Creation.” As if shot through gauze, it is a poetic look at the seasons of the year — as well as life, youth, marriage and death. He shares the aesthetic of filmmaker Terrence Malick, without the pedantries.

The run of “Herald 3” coincided with the bicycle races when the library was closed for a full week. But this show should not be missed. S

“Herald 3” runs through Nov. 4 at the main Richmond Public Library but will hold a special closing reception for the artists on Wednesday, Nov. 4, from 4 to 6 p.m. Nationally recognized string musician Mark Campbell will perform. Free and open to the public.