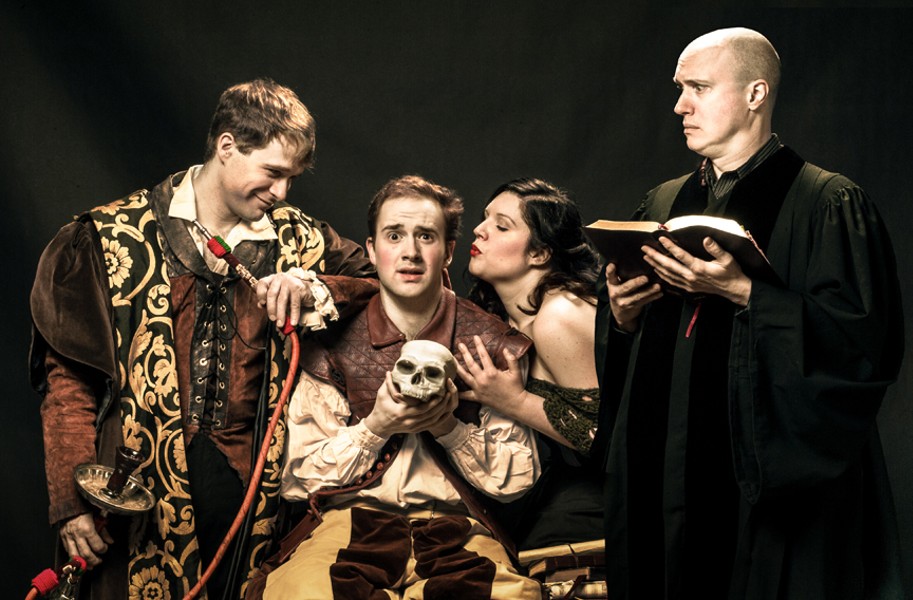 In Henley Street Theatre and Richmond Shakespeare’s “Wittenberg,” Martin Luther and Doctor Faustus walk into a bar. If this situation sounds like it’s heading toward a punchline, you’d be half correct.

The year is 1517. The real-life Luther and the fictional Faustus are engaged in the education of young Prince Hamlet. Faustus has yet to sell his soul to the devil, Hamlet has yet to learn of the death of his father, and Luther has yet to write his 95 Theses, which would launch the Protestant Reformation.

While each approaches his crossroads, playwright David Davalos uses this Tom Stoppard-like setup to delve into bigger issues of faith and existence. At its best, Davalos’ script plays Luther and Faustus off each other to debate the big questions. At its worst, the play becomes bogged down in “Hamlet” references and hit-or-miss jokes.

Hamlet (Dixon Cashwell) has recently returned to the University of Wittenberg after studying with Copernicus in Poland. With him is a manuscript, espousing Copernicus’ literally revolutionary idea that the sun is the center of the solar system, not the Earth. The manuscript endears him to Faustus (Jeffrey Cole), but Hamlet also looks to Luther (Andrew Hamm) for spiritual guidance.

As Faustus, Cole gives us an impish and worldly scholar, higher on life than Ferris Bueller. He goads Luther into writing down his grievances with the Catholic Church and treats Luther’s blocked mind and bowels with a foreign substance called “coffee.” Playing Luther, Hamm brings to life a serious-minded scholar disgusted with the sale of indulgences -- paying money to the church for absolution of one’s sins or release from purgatory. The characters make an interesting match, with Faustus arguing to blow up the church and Luther passionately contending that it just needs a new paint job.

But Cashwell’s part as Hamlet proves to be the meatiest, dramatically. With his goofy delivery and affected voice, Cashwell successfully lands both the serious and comedic aspects of his role. Stacie Rearden Hall rounds out the cast as a series of women, each more brassy than the last.

J. Paul Nicholas’ direction excels during the play’s more human moments -- like the bar scene in the first act -- but has trouble gelling the constant switch from humor to drama.

While amusing, the zany charm of “Wittenberg” begins to flag soon after the exposition, and the script’s joking tone undercuts any dramatic impact it attempts. Clever moments - like Hamlet dueling Laertes on the tennis court instead of fencing - could probably have worked better in a one-act play.