This ramen spot aims to cure your hangover and hunger. 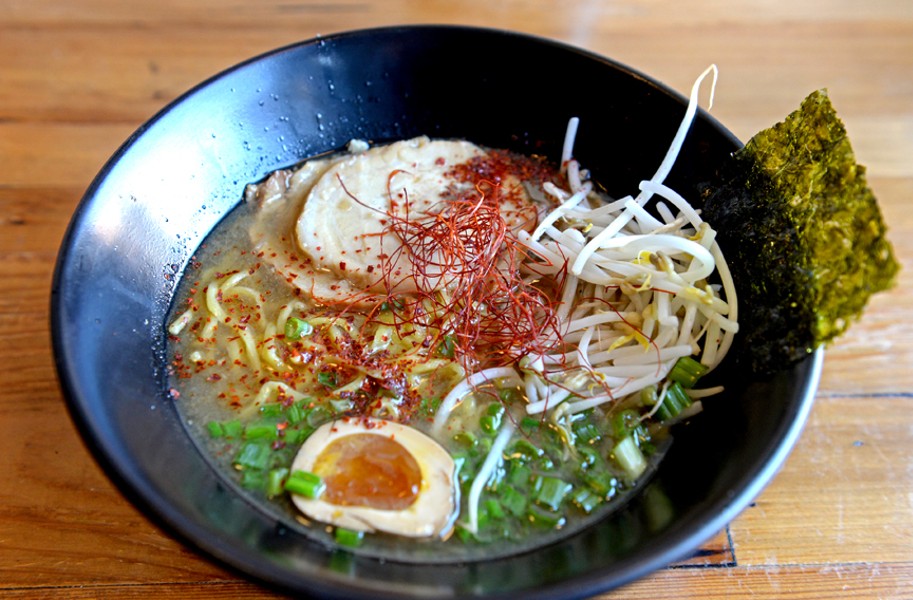 Ramen aficionados know two things: The soup is intended to be slurped up in a hurry, and it's an impeccable hangover cure.

Hai Y'all, the new ramen kid on the block in Carytown, is the brainchild of Andrew Friel, co-owner of grilled cheese emporium Home Sweet Home a few blocks up Cary Street. A longtime fan of Japanese food, Friel returned from his last trip to the Land of the Rising Sun determined to have chef Sam Hall replicate the rich, complex broths he'd tasted overseas.

When the burrito shop Best Friends Forever closed in June, Friel took over the space to offer two signature broths and a handful of small plates. Worth mentioning is that the soups are not traditional ramen, but variations on a theme. The tonkotsu broth is made with chicken, various cuts of pork and smoked bacon, but isn't as cloudy as conventional tonkotsu. Richer and brinier than its traditional counterpart, the miso broth is vegan, made with shiitake mushrooms, the edible kelp kombu, seasonal vegetables and finished off with red and white miso.

Friel and Hall have made it their mission to bring salty, rich and umami-filled flavor to Richmond's hungover masses. But as the menu reminds us, they're not doing it in an established way because they identify as "barbecue guys with a pickling habit."

Like a classic ramen shop, the space is small, seating as many as 35 in a black and red dining room accented by yellow chairs. A small bar in the back dispenses cocktails ($7-8), four sakes ($6-18) and naturally, a sake bomb ($5), beer ($2-9) and a concise but thoughtful and well-priced array of wine ($7.50-8.50 glass, $23-35 bottle). Alternative music plays at a volume that makes the place feel lively, a decided contrast to the leisurely pace of service.

Succinct is the name of the game here and with only six items on the menu — eight if you count different fillings — it doesn't take long to eat through everything the kitchen has to offer. Crunch and sass arrive on a tiny pickle plate ($3) of rotating vegetables, which in our case meant piquant baby bok choy, cabbage and carrots. For sheer novelty, cucumber salad ($6) delivers what our server describes as "the most elegant salad ever," featuring noodlelike strands of cucumber over greens with the sesame dressing spread over half the plate for effect.

In another example of its fusion focus, the kitchen at Hai Y'all makes the steamed buns known as bao ($5) with potato flour, a nod to Martin's potato rolls. My candidate for the bao most likely to succeed is the house-smoked pork, rich and flavorful, even without adding the accompanying pickled vegetables. Shiitake mushrooms filled the vegetable bao when I had them, but even with an assist from cucumbers and carrots, the result was lackluster.

It would be easy to make a habit of the handmade dumplings known as gyoza ($6), whether stuffed with more of the house-smoked pork or minced vegetables. Both had just the right amount of golden brown sear to them and quickly disappeared in a flurry of chopsticks. The kitchen shows off its barbecue bona fides with dry-rub ribs ($6), their sweet smokiness leaving your taste buds craving more and your fingers satisfyingly sticky.

Come soup time, your choice of what to slurp is tonkotsu ($12) or miso ($10), both with bean sprouts, scallions, egg, nori (seaweed) and chili threads. My first attempt at tonkotsu was a disappointment, the broth undersalted and off-tasting, despite the menu's claim that it was cooked for 10 hours. Happily, the following visit rewarded me with a perfectly balanced and seasoned broth with two large pieces of pork tenderloin that was irresistible. That said, even carnivores will find a lot to like about the meat-free miso ramen, its appealing body derived from kelp during three hours of cooking.

When it comes to the first rule of ramen, slurping Hai Y'all's broth in a hurry is no problem, but often getting your ramen in even a reasonable time frame is. I've yet to find more than one server on the floor and with Carytown's nonstop foot traffic, hungry and hungover patrons are constantly coming through the door. Although our appetizers arrived within 15 minutes, it was another half an hour before our ramen made an appearance, while getting the check took another 20 minutes. For a restaurant barely a third full, that's too long.

When you're feeding the weary masses recovering from the night before, ramen relief needs to arrive stat. S