Review: Firehouse's "The Boy in the Bathroom" 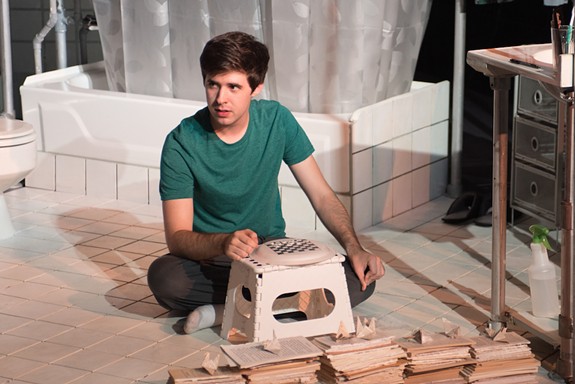 In real life, breaking out in song while shopping for groceries or riding the subway is evidence that someone is losing their marbles. In musicals, people transition between regular dialogue and big flashy show tunes all the time and we think nothing of it.

But this isn’t the only odd condition the audience is asked to accept in the new musical “The Boy in the Bathroom.” In this show, we are expected to believe that two people can fall in love without having seen each other. While relationships emerge in all sorts of ways in the Internet age, love still usually requires visual confirmation.

The boy in the title is David (Denver Crawford), a 20-something crippled by OCD. For the past year he has locked himself in his mother’s Michigan bathroom as he contemplates the senior thesis he needs to graduate college. This is where he sleeps; this is where he eats, receiving “one and a half inch high” meals under the door from his mother.

David is perfectly content to stay in the bathroom forever, but his tiled paradise is challenged after his mother Pam (Catherine Shaffner) breaks her hip. She now requires the assistance of neighbor Julie (Rebecca Turner) around the house, who quickly becomes fascinated with the young man who won’t come out of the bathroom.

As the scenes pass, Julie and David’s attraction for each other grows, and she dares him to experience the outside world again. Crawford and Turner are charming as the duo, and Crawford tackles his role earnestly without overselling David’s OCD tics. Under Adam B. Ferguson’s direction, Crawford is perhaps daringly bland as David. After all, this is a man who has spent the past year inside a bathroom; a box of firecrackers he is not.

As Julie, Turner has the show’s most charismatic role, a minor screw-up who can’t wait to leave her small Michigan town. Turner makes us believe that her captivation with a man she can’t see is genuine, and it rests on her slim shoulders to propel the musical’s action along. The character could easily have fallen into the “Manic Pixie Dream Girl” trap, a trope where a female romantic role is crafted solely to further the male protagonist’s development. Thankfully the show skirts this, making Julie a full character with her own desires and motivations.

As David’s mother Pam, Shaffer wows in each of her numbers, milking songs like “Full” to their full dramatic potential. “Full” details how alone she’s felt since her husband left, and how she’s filled in the gaps in her life with food ever since. Pam has expanded herself physically to make up for her feelings of being small, and Shaffner’s wounded portrayal is the most touching part of the evening.

Penned by Michael Lluberes and with music by Joe Maloney (they share lyrical duties), “The Boy in the Bathroom” is a surprisingly realistic tale, given its subject matter. There are no big flights of fancy, no imaginings of grandiosity; these are normal people hoping to stave off loneliness with thoughts of a better tomorrow.

That said, the idea that David and Julie don’t see each other as they fall in love stretches believability: At some point, you’d think they’d at least slip a photo of themselves under the door. For all Julie knows, David could look like Saddam Hussein after they pulled him out of that hole.

Maloney’s score is pleasing under Starlet Knight’s musical direction and piano playing, but it would probably benefit from fleshing out with additional instruments. At their best, Lluberes and Maloney’s lyrics affect a nearly Sondheimian sense of longing, though there are still groan-inducing lines like David’s “It’s my abode and my commode” in the opening number.

Tennessee Dixon’s stark set of pipe and tile manages to feel both open and closed off, reflecting the conflicting desires of the show’s protagonists. In local theater, digital projections are often a distraction, but Dixon’s actually add to the show, especially when Crawford is singing in the bathtub.

In Michigan, a place where locals shape their hands like mittens to point out where they’re at and where they’re going, we learn that the journey to self-discovery is not as far as we might think.

“The Boy in the Bathroom” plays through Sept. 4 at the Firehouse Theatre Project, 1609 W. Broad St. For more information, call 355-2001 or visit firehousetheatre.org.