Firehouse’s latest has some funny moments but feels like old hat. 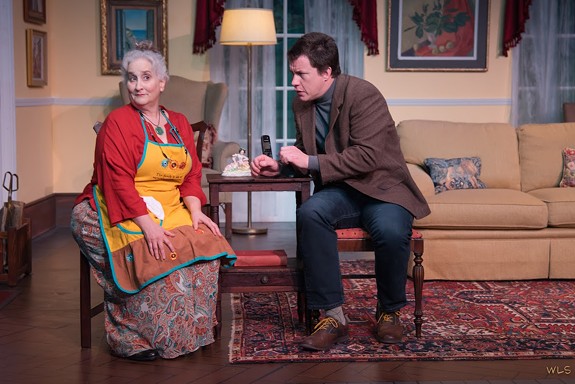 As with any work of performance art, attending a play requires the viewer to engage in a suspension of disbelief: Why are the people onstage facing the audience? How do those people always know the right thing to say at the right time? How are they able to shrink days of action into just a couple of hours? We ignore such questions to enjoy an evening of theater.

But in A.R. Gurney’s “The Fourth Wall,” playing the Firehouse Theatre, these pesky questions aren’t so easily shrugged off. On Edwin Slipek’s sumptuously appointed living room set -- he is Style’s senior contributing editor-- the show’s characters explore the artifice of the stage and wonder what lies beyond the footlights.

Taking place in 2003, the show’s faint whiff of a plot hinges on a middle-aged woman named Peggy (Jacqueline Jones) and her decision to leave one of her living room’s four walls -- the one that’s the vantage point of the audience -- completely blank. Stranger still, Peggy has turned all the furniture to face that wall and started talking in a stagey manner whenever she enters the room.

This concerns her husband, Roger (Michael Hawke), who finds himself also speaking theatrically whenever he’s in the room. Looking for help, Roger brings in an old friend, Julia (Annie Zannetti), and theater professor Floyd (Landon Nagel) to get to the bottom of this odd behavior. Soon, Julia has turned into a sex fiend, Floyd has changed his sexual orientation and everything becomes much more dramatic.

The cause for all this weirdness? Why, President George W. Bush, of course!

Because Peggy can’t believe what’s happening to the country, she’s started to disbelieve other parts of her life. While this is going on, the characters bicker about whether the play they find themselves in is a classic living-room comedy or an existential drama a la Beckett. Oh, and if this weren’t enough, the cast also sings Cole Porter tunes between scenes, with varying degrees of success.

Put simply, it feels as though the playwright tried to blend a handful of ideas and ended up with mush. It’s obvious that Gurney thinks his script is much cleverer than it is, and by the time the characters finally puncture the fourth wall, it feels like a letdown instead of the celebration he must've wanted.

And, as it’s now 2015, beating up on Dubya seems incredibly old hat. Like so many other politically tinged shows these days, the play makes the mistake of tackling one person instead of more broad and evergreen targets such as cowboy diplomacy or the problems of the pax Americana.

Though Nagel comes through with some genuinely funny moments and other members of the cast have their flashes, this meta-theatrical farce is lacking in punch and wit.

“The Fourth Wall” plays through Jan. 31 at the Firehouse Theatre Project, 1609 W. Broad St. For information, call 355-2001 or visit firehousetheatre.org.