This rock musical based on a cult film is noxiously good. 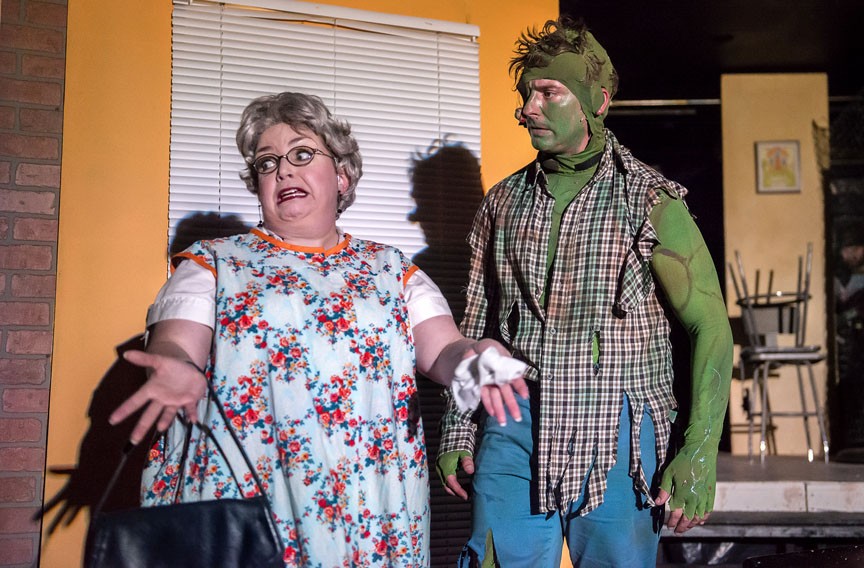 From Bruce Springsteen to Bon Jovi to the ubiquitous New Jersey barrier, the Garden State’s cultural output has been impressive, especially considering that it is the fourth-smallest state in the country.

No account of its artistic riches would be complete without mentioning “The Toxic Avenger,” the low-budget movie released by Troma Entertainment in 1984. It tells the tale of a geek who becomes a superhero after being exposed to toxic waste and is now considered a cult classic, spawning three sequels, a cartoon and an off-Broadway rock musical. Fifth Wall Theatre currently is staging the latter, and results are noxiously good.

At the start, Melvin Ferd the Third (Alexander Sapp) is little more than a geeky weakling with a crush on Sarah (Rachel Rose Gilmour), an attractive blind librarian. With Sarah’s help, he uncovers that Mayor Babs Belgoody (Debra Wagoner) owns a company that’s dumping toxic waste around the city. When the mayor’s henchmen toss him in a barrel of the bubbling green stuff, Melvin is reborn a superhero, vowing to fight the mayor and bad guys everywhere.

As fans of the movie have probably realized, the musical plays loosely within the framework of the original film, but few will be disappointed. Under Keith Fitzgerald’s direction, it’s still a rollicking, limb-pulling and vulgar good time. With music by Bon Jovi founding member David Bryan, it certainly earns its New Jersey pedigree.

Portraying the title character, it’s almost unfair how easily Sapp handles the singing, dancing and comedic demands of the role. Sapp’s considerable chops have plenty of room to shine in this role, and he’s matched step-for-step by Gilmour as his character’s love interest. A relative newcomer to Richmond’s theater scene, Gilmour is impressive in numbers such as “My Big French Boyfriend” and “Choose Me, Oprah” -- especially with Emily Dandridge’s choreography.

Wagoner is comically sinister as the evil mayor who believes bribes and sexual favors will take her to the governorship. Turning up her megawatt voice, Wagoner is hysterical in numbers such as “Jersey Girl” and “Evil is Hot.” One of the best moments in the show is hers alone, when she plays two characters against each other in “Bitch/Slut/Liar/Whore.”

Playing a slew of different roles, William Anderson and Chris Hester (credited as “The Black Dude” and “The White Dude”) round out the cast. They’re uproarious together, jumping from thugs to doctors to police officers to Sarah’s best friends.

The entire five-person cast is blessed with stellar voices, ably supported by musical director Starlet Knight and her backing band. The actors and musicians work together perfectly thanks to Joey Luck, who serves as both sound designer and sound board operator for this production.

While still campy and hilarious, the musical is more entertaining and coherent in a traditional sense than the movie that spawned it and retains a level of sweetness underneath all its crassness. If you’re in the mood for a hilarious and well-produced musical that falls somewhere between “South Park” and “Little Shop of Horrors,” “The Toxic Avenger” won’t disappoint.